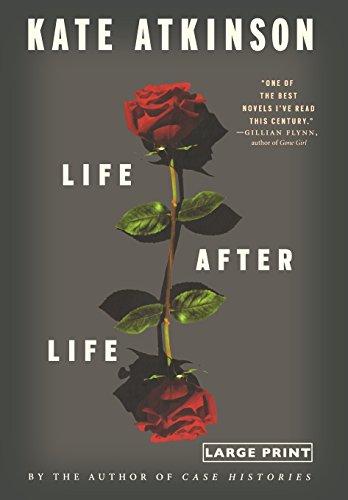 What if you could live again and again, until you got it right?

On a cold and snowy night in 1910, Ursula Todd is born to an English banker and his wife. She dies before she can draw her first breath. On that same cold and snowy night, Ursula Todd is born, lets out a lusty wail, and embarks upon a life that will be, to say the least, unusual. For as she grows, she also dies, repeatedly, in a variety of ways, while the young century marches on towards its second cataclysmic world war.

Does Ursula’s apparently infinite number of lives give her the power to save the world from its inevitable destiny?

What if you could live again and again, until you got it right?

On a cold and snowy night in 1910, Ursula Todd is born to an English banker and his wife. She dies before she can draw her first breath. On that same cold and snowy night, Ursula Todd is born, lets out a lusty wail, and embarks upon a life that will be, to say the least, unusual. For as she grows, she also dies, repeatedly, in a variety of ways, while the young century marches on towards its second cataclysmic world war.

Does Ursula’s apparently infinite number of lives give her the power to save the world from its inevitable destiny? And if she can—will she?

Kate Atkinson‘s first novel, Behind the Scenes at the Museum, was named England’s Whitbread Book of the Year in 1996. Since then, she has written seven more ground-breaking, bestselling books, most recently Started Early, Took My Dog. She lives in Edinburgh, Scotland.

“Life After Life is a masterpiece about how even the smallest choices can sometimes change the course of history. It’s wise, bittersweet, funny, and unlike anything else you’ve ever read. Kate Atkinson is one of my all-time favorite novelists, and I believe this is her best book yet.”—J. Courtney Sullivan, bestselling author of Maine and Commencement

“Kate Atkinson’s new novel is a box of delights. Ingenious in construction, indefatigably entertaining, it grips the reader’s imagination on the first page and never let’s go. If you wish to be moved and astonished, read it. And if you want to give a dazzling present, buy it for your friends.”—Hilary Mantel, author of Wolf Hall and Bring Up the Bodies

“An audacious, ambitious book that challenges notions of time, fate and free will, not to mention narrative plausibility…[Atkinson’s] writing is funny and quirky and sharp and sad – calamity laced with humor – and full of quietly heroic characters who offer knowing Lorrie Moore-esque parenthetical asides…Atkinson’s true genius is structure…Each version is entirely and equally credible.”—Sarah Lyall, New York Times

Ursula Todd gets to live out many different realities, something that’s impossible in real life. Though there is an array of possibilities that form Ursula’s alternate histories, do you think any and all futures are possible in Ursula’s world, or are there certain parameters within which each life is lived?

As time goes on, Ursula learns more about her ability to restart her life—and she often changes course accordingly, but she doesn’t always correct things. Why not? Do you think Ursula ever becomes completely conscious of her ability to relive and redo her lives? If so, at what point in the story do you think that happens? And what purpose do you think she sets for herself once she figures it out?

Do people’s choices have the power to change destiny? How do you think Ursula’s choices are either at odds with or in line with the ideas of fate and destiny throughout the story?

Small moments often have huge ramifications in Ursula’s life. Do you think certain moments are more crucial than others in the way Ursula’s life develops? Why, and which moments?

How does Atkinson portray gender throughout the story? How does she comment on the gender roles of this time period, and which characters challenge those roles—and how?

How does Atkinson’s humor pepper the story? In what ways is she able to bring a bit of comedy to her characters and their stories as relief from the serious and dark subject matter?

How do the various relationships within the Todd family shape the story? What is the significance of maternal bonds and sibling bonds in the story?

How does Atkinson capture the terror and tragedy of the Blitz? How does war become its own character in the book? What type of commentary does Atkinson make on the English approach to war? Why do you think Atkinson portrayed one of Ursula’s lives in Germany, experiencing war and the bombing from the opposing side?

On page 379, Ursula faces a bleak end in Germany with her daughter, Frieda. She chooses death over life for the first time, saying, “Something had cracked and broken and the order of things had changed.” What do you think she means by that? Is this a significant turning point to Ursula’s story? Do you think the end of this life affects her decisions in other lives that follow?

On page 354, Klara says, “Hindsight’s a wonderful thing. If we all had it there would be no history to write about.” Do you think this is true? In what ways does the use of hindsight come to pass in the book?

“‘Well, we all get on,’ Sylvie said, ‘one way or another. And in the end we all arrive at the same place. I hardly see that it matters how we get there.’ It seemed to Ursula that how you got there was the whole point…” (page 252). Do you agree with Sylvie or with Ursula? How does this relate to a philosophy raised by Dr. Kellet—that “sometimes a bad thing happens to prevent a worse thing happening” (page 160)?

Along similar lines, Ursula says to Teddy on page 446, “You just have to get on with life….We only have one after all, we should try and do our best. We can never get it right, but we must try.” And Teddy responds, “What if we had a chance to do it again and again until we finally did get it right?” What do you think it means to get things right? Is Ursula attempting to make things “right” in life each time she’s reborn? If so, which things in particular—and how?

On page 277, Ralph asks Ursula if she could have killed Hitler as a baby, and Ursula thinks, “If I thought it would save Teddy…. Not just Teddy, of course, the rest of the world, too.” Do you think Ursula ultimately had to choose between saving Teddy and saving “the rest of the world”? If so, why did she choose as she did? And was she able to save either?

Life continues to restart over and over for Ursula and the Todd family, and outcomes vary greatly each time. What happens to the characters changes drastically in many of the versions. Do you feel the characters change just as drastically, in terms of who they are and what they are like? Or do you think they fundamentally stay the same? Ursula learns many things about life and its progression, but does she herself change over the course of the book?

What are the biggest questions this book raised for you? How did it change the way you think about the course of your own life?