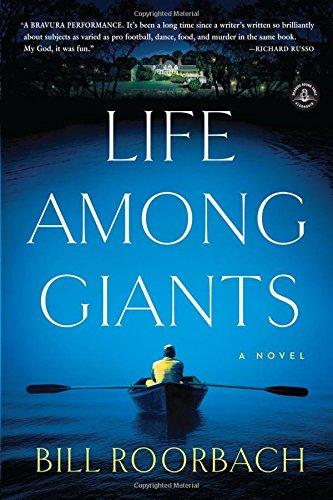 This funny, exuberant novel captures the reader with the grand sweep of seven-foot-tall David “Lizard” Hochmeyer’s larger-than-life quest to unravel the mystery surrounding his parents’ deaths. It’s a journey laden with pro football stars, a master chef and his beautiful transvestite lover, a world-famous ballerina and her English rocker husband, and a sister who’s as brilliant as she is unstable. A wildly entertaining, plot-twisting novel of murder, seduction,

This funny, exuberant novel captures the reader with the grand sweep of seven-foot-tall David “Lizard” Hochmeyer’s larger-than-life quest to unravel the mystery surrounding his parents’ deaths. It’s a journey laden with pro football stars, a master chef and his beautiful transvestite lover, a world-famous ballerina and her English rocker husband, and a sister who’s as brilliant as she is unstable. A wildly entertaining, plot-twisting novel of murder, seduction, and revenge—rich in incident, expansive in character, and lavish in setting—Life Among Giants is an exhilarating adventure.

Bill Roorbach is the author of eight books of fiction and nonfiction. His work has been published in Harper’s, The Atlantic Monthly, Playboy, the New York Times Magazine, Granta, New York, and dozens of other magazines and journals.

“A bighearted, big-boned story . . . Life Among Giants reads like something written by a kinder, gentler John Irving . . . Roorbach is a humane and entertaining storyteller with a smooth, graceful style.”—The Washington Post

“[Lizard’s and his sister’s] fascinating journey highlights the importance of steering your own fate, and it left me pondering where my own life will lead.”—Real Simple (reader’s review)

“[An] eventful, elegiac novel of sports and murder, food and finance.”—Bloomberg News

Who are the giants of the title? Is Lizard one of them, or is he merely an observer and chronicler? What is life among these giants like for Lizard? How have they steered his life? And how has he resisted them?

Why do you think Sylphide is so attracted to Lizard, and why, throughout their lives, does she keep him at arm’s length? In what ways does he differ from the men she chooses to marry?

What is the draw of the High Side for each of the members of the ?Hochmeyer family? Is it something different for each one? Is there an equal repulsion for each? Who pays the highest price?

Where would you place the root cause of the Hochmeyer family’s problems? Is it Dad’s insecurity and posing? Kate’s troubled questing? Mom’s chilly withholding? Or does it lie with Lizard himself? The Hochmeyer family has a lot of secrets, and a lot of alliances among its members. What are the secrets, and who knows what? And who shares what with whom?

Is Lizard’s father truly bad? Or is he an insecure person trying to build himself up? Is he being manipulated by stronger forces, or is he an operator, looking out for himself?

Lizard connects with a number of women in the book, yet he seems to pick loves who aren’t truly available. What’s that all about?

Emily is very important to Lizard, yet she doesn’t offer herself to him very fully. Why does he hold her in such high regard? What role does she play in his development and in the devel-opment of the story?

Lizard takes warmly to Etienne and RuAngela. Why do you think this odd couple appeals to him?

From the first paragraph to the last climactic moments, food plays a big part in Life Among Giants. What is the role of food in the narrative?

Why does Sylphide choose death in the end? Hasn’t she every reason to live?

What do you think Kate and Dabney’s relationship was really like? Was it one based on love or was it based on something else?

Life Among Giants is not a traditional mystery, nor is it a traditional bildungsroman. How does it depart from the con-ventions of each genre? How does the story of this young man’s growth interconnect with his quest to find the killers?