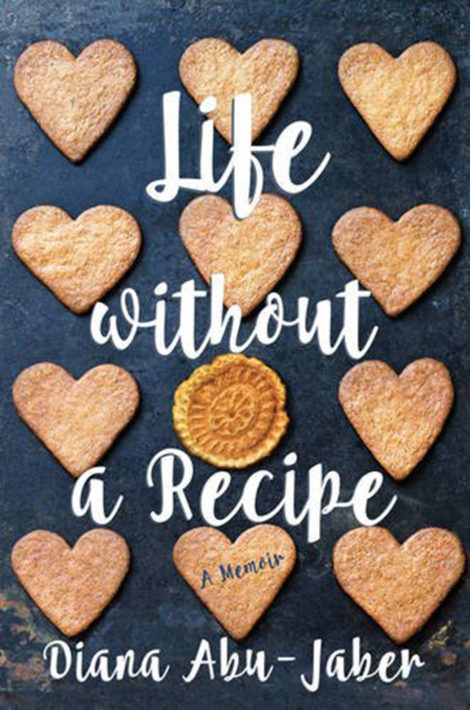 LIFE WITHOUT A RECIPE

A Memoir of Food and Family

On one side, there is Grace: prize-winning author Diana Abu-Jaber’s tough, independent sugar-fiend of a German grandmother, wielding a suitcase full of holiday cookies. On the other, Bud: a flamboyant, spice-obsessed Arab father, full of passionate argument. The two could not agree on anything: not about food, work, or especially about what Diana should do with her life. Grace warned her away from children. Bud wanted her married above all—even if he had to provide the ring. Caught between cultures and lavished with contradictory “advice” from both sides of her family, Diana spent years learning how to ignore others’ well-intentioned prescriptions.

On one side, there is Grace: prize-winning author Diana Abu-Jaber’s tough, independent sugar-fiend of a German grandmother, wielding a suitcase full of holiday cookies. On the other, Bud: a flamboyant, spice-obsessed Arab father, full of passionate argument. The two could not agree on anything: not about food, work, or especially about what Diana should do with her life. Grace warned her away from children. Bud wanted her married above all—even if he had to provide the ring. Caught between cultures and lavished with contradictory “advice” from both sides of her family, Diana spent years learning how to ignore others’ well-intentioned prescriptions.

Hilarious, gorgeously written, poignant, and wise, Life Without a Recipe is Diana’s celebration of journeying without a map, of learning to ignore the script and improvise, of escaping family and making family on one’s own terms. As Diana discovers, however, building confidence in one’s own path sometimes takes a mistaken marriage or two—or in her case, three: to a longhaired boy-poet, to a dashing deconstructionist literary scholar, and finally to her steadfast, outdoors-loving Scott. It also takes a good deal of angst (was it possible to have a serious writing career and be a mother?) and, even when she knew what she wanted (the craziest thing, in one’s late forties: a baby!), the nerve to pursue it.

Finally, fearlessly independent like the Grace she’s named after, Diana and Scott’s daughter Gracie will heal all the old battles with Bud and, like her writer-mom, learn to cook up a life without a recipe.

Diana Abu-Jaber is the award-winning author of four novels, including Crescent, and a previous memoir, The Language of Baklava. She and her family divide time between Miami, Florida, and Portland, Oregon.

“This bold, luscious memoir is both recollection and guide. Brimming with great meals and family struggle, it walks a path between cultural traditions and American individualism. A vivid story of one writer’s journey to build a creative life, one lived ‘without recipes,’ this book will be indispensable to anyone trying to forge their own truer path.” — Ruth Reichl

“[A] deliciously candid story….Generously seasoned by an abiding love of food and a keen eye for the nuances of human relationships, this book is a reminder that however unpredictable it may be, life is a dish to be savored. A delectably warm and wise memoir.” — Kirkus Reviews

“Wonderfully written, honest, funny, and deeply heart-touching, Diana Abu-Jaber’s memoir is a joyous read that speaks to the creative spirit in us all.” — Heidi W. Durrow, New York Times best-selling author of The Girl Who Fell from the Sky

“Filled with visceral joys and literary beauty as well as soulful honesty and a gripping story. Diana Abu-Jaber writes trenchantly and gorgeously about family, marriage, and motherhood with insights and connections that feel hard-won and richly earned. Her sharp intelligence and unsparing self-knowledge bristle on every page alongside her passionate brio for life in all its flavors and complexities.” — Kate Christensen, author of Blue Plate Special and The Great Man

“Babies are for women who can’t do much else.” Why do you think Gram holds this opinion of mothers? What other pressures deter Diana from having a child? What draws her to adopt in middle age? Do you encounter people who claim that artists must be “selfish” to serve their art, and female artists must “choose” between a fertile, intellectual, or creative life and having a family? Or do you encounter stereotypes of mothers as homebound? What do you say?

There’s a lot about appetite, food, and cooking in Diana’s memoir. What is a woman’s relationship to food supposed to look like? And does this relationship stay the same over the course of her life, or does it change?

To what extent is food in this memoir, or in your own experience, a stand-in for ethnicity and group belonging, and to what extent is it an expression of individual desire?

Diana’s family members, from her father to her grandfather to her aunts and uncles, all offer various forms of life advice. How does Diana reconcile all of these multiple perspectives?

“Adversaries, even enemies, can rely on each other. My father and my grandmother teach me this by accident. They don’t get along and they agree on everything.” Why do you think Grace and Bud’s adversarial relationship lasts for as long as it does? How else are family members adversaries in this book, and how are they allies?

“ ‘Your baby is so pretty, and such an interesting color—was her daddy very dark?’ . . . The woman watches me, Bud, Gracie, her face sharpened, trying to add up our colors. Perhaps it’s not kind, but I say brightly, ‘Actually, I’m not sure who the daddy is.’ ” Today, many Americans grow up in multicultural, multiracial families similar to Diana’s. Why do you think some people are resistant to this? What are other difficulties attached to growing up in, or raising, a multicultural family?

“You’re pretending to be this big feminist,” a friend once said to Diana, “You really don’t care about any of it.” “I do so care,” Diana responds, unable to think of anything more to say in response. Do you think the men and women in Life Without a Recipe are feminists? What do you think it means to be a feminist today?

Before finding Scott, Diana survived two divorces. What do you think Diana learned from her failed relationships? Why do you think she got into these marriages in the first place?

Bud, Diana writes, let Grace “have the religion” in their turf wars over the children. Do you think there’s room for ritual and tradition in a “life without a recipe” and for “modern” women in America?

“You limit yourself to the books of the English?” an incredulous Parisian baker asked a teenage Diana. “Quel domage! . . . Life is for the blood! If you want the feeling for life, for the blood of the mind, you should be studying Hugo, Proust, Stendhal, Voltaire, Flaubert.” What do you think the baker means by comparing French and English literature here? Do you think there’s a relationship between Diana’s work with literature and her approach to life?

Diana’s identity as a mother, wife, daughter, and granddaughter are central to this book. How do you think these roles interact with her Arab-American identity? And her identity as a writer?

Rebecca Goldstein titled a novel about an Orthodox Jewish woman’s sexual awakening The Mind-Body Problem. Is there such a “problem” in this memoir, and if so, how would you define it and how is it solved?