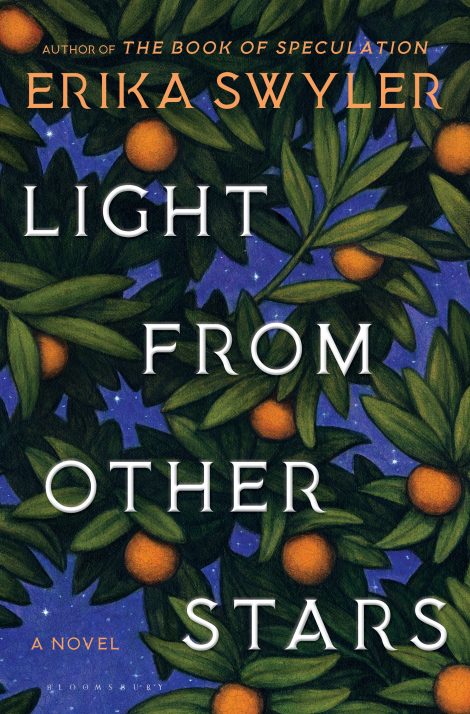 LIGHT FROM OTHER STARS

From the author of national bestseller The Book of Speculation, a poignant, fantastical novel about the electric combination of ambition and wonder that keeps us reaching toward the heavens.

Eleven-year-old Nedda Papas is obsessed with becoming an astronaut. In 1986 in Easter, a small Florida Space Coast town, her dreams seem almost within reach–if she can just grow up fast enough. Theo, the scientist father she idolizes, is consumed by his own obsessions. Laid off from his job at NASA and still reeling from the loss of Nedda’s newborn brother several years before,

From the author of national bestseller The Book of Speculation, a poignant, fantastical novel about the electric combination of ambition and wonder that keeps us reaching toward the heavens.

Eleven-year-old Nedda Papas is obsessed with becoming an astronaut. In 1986 in Easter, a small Florida Space Coast town, her dreams seem almost within reach–if she can just grow up fast enough. Theo, the scientist father she idolizes, is consumed by his own obsessions. Laid off from his job at NASA and still reeling from the loss of Nedda’s newborn brother several years before, Theo turns to the dangerous dream of extending his living daughter’s childhood just a little longer. The result is an invention that alters the fabric of time.

Amidst the chaos that erupts, Nedda must confront her father and his secrets, the ramifications of which will irrevocably change her life, her community, and the entire world. But she finds an unexpected ally in Betheen, the mother she’s never quite understood, who surprises Nedda by seeing her more clearly than anyone else. Decades later, Nedda has achieved her long-held dream, and as she floats in antigravity, far from earth, she and her crewmates face a serious crisis. Nedda may hold the key to the solution, if she can come to terms with her past and the future that awaits her.

Light from Other Stars is about fathers and daughters, women and the forces that hold them back, and the cost of meaningful work. It questions how our lives have changed, what progress looks like, and what it really means to sacrifice for the greater good. Erika Swyler‘s first novel, The Book of Speculation, was one of BuzzFeed’s 24 Best Fiction Books of 2015, one of Amazon’s Best Novels of 2015, and a Barnes & Noble Discover Great New Writers selection. Her writing has appeared in Catapult Story, VIDA, The New York Times, and elsewhere. She lives on Long Island, NY, with her husband and a mischievous rabbit.

“Grand in scope and graceful in execution… At once a wistfully nostalgic coming-of-age tale and a profound word of horror-tinged science fiction.” —Kirkus Reviews, starred review

“A masterful story that hops through time to tell a tale of love and ambition, grief and resilience… It is full of joy and wonder, a reminder to never stop looking up into the stars and the infinite spaces in between them.” ―Nylon

1. Discuss the juxtaposition of science and faith, whether religious or otherwise, as explored in the novel.

2. For readers who are old enough to remember the Challenger disaster, what are your memories of it? How does Nedda’s experience of it compare with your own?

3. What is the significance of setting the novel in a town called Easter?

4. What do Theo and Betheen’s personal passions and career paths reveal about their characters as individuals, as well as their marriage? What role do their scientific pursuits play in their roles as parents?

5. Discuss the similarities and differences between the various parent/child relationships described in the book, particularly Denny and Nedda’s relationship with their parents. What impact do their upbringings have on Denny and Nedda as adults?

6. Do you view Theo’s motivation for building Crucible as altruistic or selfish? Why?

7. Why does Pete tell Betheen to look at the man’s car as it sinks after the accident? How does their interaction after the crash foreshadow their future relationship? How does it compare with Betheen’s instructions to Nedda during the explosion in the lab?

9. Discuss the ways in which Nedda’s feelings towards each of her parents evolves over the course of the novel. Are there specific moments you can point to when her attitude towards them shift? If so, when and why do these occur?

10. Throughout the novel, there are recurring instances of characters keeping secrets from or lying to other characters in order to protect them. Do you agree with this philosophy? Discuss some of these moments and whether you feel the characters should have behaved differently.

11. Consider the different ways in which characters including Betheen, Theo, Nedda, Evgeni, and Denny grieve. Which character do you identify with the most in this regard, and why?

12. Did you have a sense of when the Chawla/“present-day” timeline was taking place before it was revealed? Why or why not?

13. Kalpana Chawla was the first woman of Indian origin to go to space, and died along with the rest of her crew in the Columbia disaster of 2003, nearly two decades after the Challenger disaster. What is the significance of naming Nedda’s ship after her?

14. Swyler begins and ends Light From Other Stars by quoting the poem “High Flight” by John Gillespie Magee, a fighter pilot who was killed during World War II. How does this poem relate to events in the novel? In what ways, if any, do Nedda and the rest of her Chawla crewmates view themselves as soldiers?

15. Why does Nedda finally feel warm after her walk to Amadeus at the end of the novel?