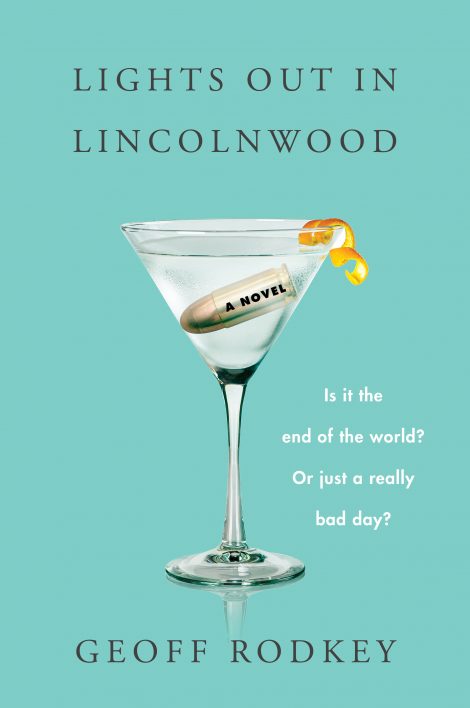 LIGHTS OUT IN LINCOLNWOOD

A mordantly funny, all-too-real novel in the vein of Tom Perotta and Emma Straub about a suburban American family who have to figure out how to survive themselves and their neighbors in the wake of a global calamity that upends all of modern life.

It’s Tuesday morning in Lincolnwood, New Jersey, and all four members of the Altman family are busy ignoring each other en route to work and school. Dan, a lawyer turned screenwriter, is preoccupied with satisfying his imperious TV producer boss’s creative demands. Seventeen-year-old daughter Chloe obsesses over her college application essay and the state tennis semifinals.

A mordantly funny, all-too-real novel in the vein of Tom Perotta and Emma Straub about a suburban American family who have to figure out how to survive themselves and their neighbors in the wake of a global calamity that upends all of modern life.

It’s Tuesday morning in Lincolnwood, New Jersey, and all four members of the Altman family are busy ignoring each other en route to work and school. Dan, a lawyer turned screenwriter, is preoccupied with satisfying his imperious TV producer boss’s creative demands. Seventeen-year-old daughter Chloe obsesses over her college application essay and the state tennis semifinals. Her vape-addicted little brother, Max, silently plots revenge against a thuggish freshman classmate. And their MBA-educated mom Jen, who gave up a successful business career to raise the kids, is counting the minutes until the others vacate the kitchen and she can pour her first vodka of the day.

Then, as the kids begin their school day and Dan rides a commuter train into Manhattan, the world comes to a sudden, inexplicable stop. Lights, phones, laptops, cars, trains…the entire technological infrastructure of 21st-century society quits working. Normal life, as the Altmans and everyone else knew it, is over.

Over four transformative, chaotic days, this privileged but clueless American family will struggle to hold it together in the face of water shortages, paramilitary neighbors, and the well-mannered looting of the local Whole Foods as they try to figure out just what the hell is going on. 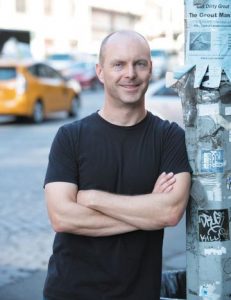 Geoff Rodkey is the New York Times best-selling author of ten children’s books, including the Tapper Twins and Chronicles of Egg series; We’re Not From Here; and Marcus Makes a Movie, a collaboration with actor Kevin Hart. He’s also the Emmy-nominated screenwriter of Daddy Day Care and RV, among other films. Geoff lives in New York City with his family.

“Lights Out in Lincolnwood is an instantly addictive, high-velocity tale of domestic tumult set against the beginning of the end of the world. Teeming with suburban pathos, crackling humor, and disarming tenderness, this novel brilliantly reveals that nothing—not even the impending collapse of civilization as we know it—imperils us more than our own weaknesses and desires. Rodkey has crafted an emotionally intelligent, ultra-modern family comedy that upends our expectations at every turn and exposes the fundamental messiness of human connection.” -Cassidy Lucas, author of Santa Monica

“Geoff Rodkey’s Lights Out in Lincolnwood is a witty, wise, engaging story about the way we live now — and the way we’ll live when it all goes down.” -Steve Hely, author of How I Became A Famous Novelist and The Wonder Trail

1. In the hours before the power goes out,what’s your impression of the Altman family? Do you empathize with them? Do their various personal problems seem relatable, or do they make you roll your eyes? All things considered, do they seem like a happy family?

2. As the story starts, Jen has decided she needs to stop drinking. Given her drinking habits, do you think of her as an alcoholic? Or just someone who’s drinking too much? Do you think this distinction matters in the context of solving her problem with alcohol?

3. Following the breakdown of the commuter train they’re on, Dan’s wealthy neighbor, Pete Blackwell, makes a sudden decision to drop his iPad by the side of the road and run the eight miles back to Lincolnwood. Why do you think he does this?

4. What do you make of the relationship between the Altmans and the Stankovics? Which family do you think is more neighborly? Given the choice, which family would you rather have living next door to you?

5. We never definitively learn what caused the technological collapse. Various characters offer competing theories about what happened. What do you think is the most likely cause?

6. How do the Altmans’ material assets (food, water, shelter, money, etc.) change after the power goes out? What implications does that have for them? If such a calamity occurred in real life, would your family be better or worse equipped to cope with it?

7. The power outage leads to a rearrangement of Lincolnwood’s politics—i.e., the process by which the town makes decisions, allocates resources, and takes collective action. How similar or different do you think your community’s reaction would be to such a calamity?

8. Societies exist at different levels of group affiliation. The town of Lincolnwood is a social unit. The Altman family is also a social unit. Over the course of the story, in what ways do the characters seek out other groups and individuals (neighbors, friends,co-workers, the Watchdog militia, the AA meeting, etc.)as sources of social support?

9. What do you think is Max’s role, both as a family member and a character? If Max didn’t exist, and the Altmans were a family of three, would the story play out differently?

10. When Marty and his wife arrive, Dan gives them shelter.If you had a boss like Marty, and they showed up on your doorstep under similar circumstances, what would you do?

11. At Thursday night’s family dinner,Dan clashes with Chloe and Jen over the ethics of their approach to the crisis. When Chloe suggests taking over someone else’s home, Dan says, “This is not who we are!” Chloe responds by asking, “What if it’s us or them?” Later, Jen thinks to herself that “they should operate on the assumption that all the normal rules of social behavior had gone out the window, and anybody who kept following them was asking for it.” Are you more inclined to agree with Dan’s point of view, or Chloe and Jen’s?

12. Late in the book,Jen promises Dan she’ll quit drinking, but only at her own pace. Dan agrees, provided that Jen give him her gun before drinking. What do you think are the pros and cons of this arrangement for both of them?How do you see it working out over time?

13. Does the quid pro quo that the judge offers Jen strike you as fair? If you were Jen (and Dan), would you agree to the same deal?

14. The novel takes place over four days. What do you think will happen to the family,the judge, and the town of Lincolnwood over the course of the following week? Month? Year?

15. According to the acknowledgments, this book was written in 2019. What impact do you think the events of 2020-21 (pandemic,civil unrest in summer‘20, political violence in Jan. ‘21, Texas power/water outages in Feb. ’21, etc.) have had on your experience of reading it?

It was less a statement than an accusation, which Dan delivered in a tone of wounded sorrow as he stared into the open refrigerator. Its top shelf, where the big tubs of Greek yogurt usually sat, was desolate except for some leftover olives in a plastic Whole Foods tub and that two-year-old jar of pineapple salsa he’d bought by accident and couldn’t bring himself to throw out even though nobody in the house wanted anything to do with a salsa defiled by fruit.

The target of his accusation wasn’t listening. Jen sat at the kitchen table in front of a mug of coffee, wearing the Michigan T-shirt she’d slept in and staring dead-eyed at her phone. On its screen was a chunk of text from an article in the Nutrition and Fitness section of the New York Times app titled “How to Stop Yourself from Crying.”

Upon seeing the headline as she scrolled, Jen’s initial reaction had been amused contempt: When did the Times start running articles that Woman’s Day rejected?

But that had quickly given way to a second, much less cynical thought: Maybe this could help.

Unfortunately, three paragraphs in, she’d realized the article was pitched exclusively to readers who didn’t want to quit crying so much as they just wanted to quit doing it in front of other people. Jen did her crying alone, usually in the upstairs bathroom on school days when nobody was home, and the Times apparently felt this was either not a problem at all or so grave as to be beyond its capacity to fix. It was hard to tell which.

Either way, by the time Dan issued his yogurt indictment, she’d stopped even trying to read the article. Her eyes were still fixed on the screen, but her mind had wandered off to wrestle with the binary choice that had come to dominate her weekdays: Will I or won’t I?

Having failed to engage his wife’s attention through passive aggression, Dan was trying again, without the passive part this time.

Finally, she turned her head from the phone. “What?”

“Why didn’t you go shopping yesterday?”

“I did! I got dinner.” Dinner had been lasagna and sautéed spinach carried out from Delectables, an overpriced gourmet place on Hawthorne Avenue that only sold prepared foods. She’d chosen it late Monday afternoon over more versatile shopping alternatives for a simple reason she didn’t dare articulate to Dan: it was possible to drive to Delectables and back by executing only right turns.

“Why didn’t you get breakfast stuff?”

“I was working! I put in a Fresh Direct order. I don’t know why it hasn’t come yet.” Jen’s laptop was on the table, halfway between her and Max. She moved her coffee mug to clear a path and dragged over the laptop. Before she opened the screen, she reached out and smacked her fourteen-year-old son’s free hand.