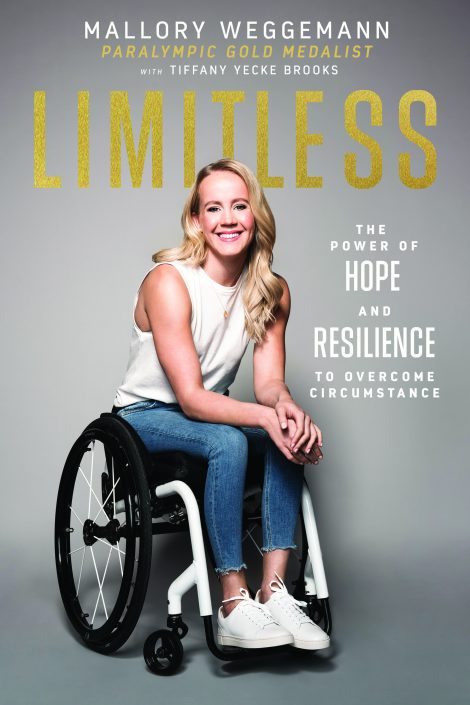 On January 21, 2008, a routine medical procedure left Mallory Weggemann paralyzed from her waist down. Less than two years later, Mallory had broken eight world records, and by the 2012 Paralympic Games, she held fifteen world records and thirty-four American records. Two years later a devastating fall severely damaged her left arm, yet Mallory refused to give up. After two reconstructive surgeries and extended rehab, she won two golds and a silver at the 2019 World Para Swimming Championships.

On January 21, 2008, a routine medical procedure left Mallory Weggemann paralyzed from her waist down. Less than two years later, Mallory had broken eight world records, and by the 2012 Paralympic Games, she held fifteen world records and thirty-four American records. Two years later a devastating fall severely damaged her left arm, yet Mallory refused to give up. After two reconstructive surgeries and extended rehab, she won two golds and a silver at the 2019 World Para Swimming Championships. And perhaps most significantly, she found confidence, independence, and persevering love as she walked down the aisle on her wedding day.

Mallory’s extraordinary resilience and uncompromising commitment to excellence are rooted in her resolve, perseverance, and sheer grit. In this remarkable new book, Mallory shares the lessons she learned by pushing past every obstacle, expectation, and limitation that stood in her way, including the need to:

Mallory’s story reminds us that whatever circumstances we face, we have the capacity to face down whatever challenges, labels, or difficulties confront us–and to do so on our own terms. 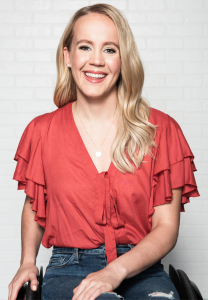 Mallory Weggemann is a record-setting, two-time Paralympic swimmer for Team USA. She has set fifteen world records and thirty-four American records, and is also the recipient of an ESPY Award, a 15-time World Champion, and a Paralympic gold and bronze medalist. Weggemann has also served as a commentator on NBC for the PyeongChang 2018 Paralympic Games, the first female reporter in a wheelchair ever to serve in that capacity. Weggemann has established herself as a leader outside of the pool, as well; she is an inclusion advocate serving on the Advisory Board of Disability for Delta Air Lines as well as a cofounder and co-CEO of TFA Group, a social impact agency and production studio. A highly sought-after motivational speaker, Weggemann has presented at numerous Fortune 500 companies, including Bank of America, Morgan Stanley, Comcast, PepsiCo, Northwestern Mutual, Aetna, Accenture, and Delta Air Lines.

Tiffany Yecke Brooks has served as a lead or contributing writer for more than two dozen books, including, most recently, James Conner’s Fear Is a Choice. She holds a PhD in literature from Florida State University and teaches writing courses for several universities.

“Limitless teaches us about the grit and tenacity it takes to keep coming back and  harnessing the inner power to realize our own limitless potential.” —Billie Jean King, Founder, Billie Jean King Leadership Initiative

“Sharing her journey with authenticity and vulnerability, Mallory doesn’t just bring us into her heart—she empowers us to reflect on our own journey, finding the power that exists when we honor our truth. At its core, Limitless is a reminder to all of us of the strength of the human spirit to overcome circumstance.” —Frank Marshall, Five-time academy award-nominated filmmaker and member of the US Olympic & Paralympic Hall of Fame

“Mallory is a hero and an inspiration in every sense of the word. Her story is written with such truth and authenticity, it will have you crying, laughing, and learning all at the same time. In these pages, she shares the true power of showing all those around you, including yourself, grace and forgiveness. Mallory’s story, heart, passion, and faith will leave you feeling like you, too, can change the world.” —Missy Franklin Johnson, Five-time Olympic Gold Medalist and Author of Relentless Spirit

“Mallory has embodied the true sense of overcoming any obstacle that presents itself. Whether physical or mental, Limitless teaches us all that choosing hope over fear will conquer anything. Such a great reminder for anyone at any age . . . it is our responses not our circumstances that ultimately define us in the end. This universal message is a must-read for the world today.” —Christine Farrell, CEO, Washington Speakers Bureau

“It’s said, the measure of a person is not whether they fall but how they get back up and continue forward. In Limitless, Mallory shares her story of how she refused to allow circumstance to define her, but rather utilized it to redefine limitations and pave her own path forward. I have been fortunate to hear Mallory speak to many groups within Delta, and I am thrilled many more people will come to know her inspirational story. Now, more than ever, we need Mallory’s message of hope and determination in overcoming adversity. Limitless will not only inspire you but empower you to find your own inherent strength within.” —Ed Bastian, CEO, Delta Air Lines

“Limitless is a beautiful and powerful journey of the human spirit that teaches us good will always overcome and our limits in life should only come from within ourselves.” —Kyle Carpenter, USMC Medal of Honor Recipient and National Bestselling Author of You Are Worth It

2. What trauma have you faced in your life? How did it shape the way you view things now?

3. What are some limitations that fear has placed on your life? What can you do to move past your fear?

4. When have you wished you could go back and change your story? How do you keep yourself moving forward rather than getting stuck in the past?

5. What defines your sense of self?

6. How might your view of yourself be different from how others view you?

7. When has an event caused you to question your value or potential?

8. Why do you think it can be hard for us to accept love from others?

9. When have you witnessed someone in your life make a comeback? What were their circumstances? What drove them to overcome their struggles?

10. What legacy do you want to leave? What are you doing to build that legacy?

Find the full discussion guide for the book by clicking here!

“You see this, girls?” Dad asked his three young daughters as he gestured out his window toward the sweeping stretch of wheat that extended to the horizon in every direction.

We saw it, and we knew what was coming. “This is the breadbasket of America,” Christin, Jessica, and I chanted along with him, cracking up. Whether we were in the prairies of North Dakota or making our way through the southern parts of Canada, wherever Dad saw vast fields, he made the same comment, for three weeks straight—every summer. We were a sight. Our family of five loaded up in the Suburban with two car-top carriers as we made our way west from our home in Minnesota. Dad was wearing his canvas bucket hat that made its appearance each summer for our family road trips; Mom was sitting in the front seat with the map sprawled out on the dashboard, shaking her head. Each year the trip varied a little, but it always brought us to the Canadian Rockies—one of our favorite places in the world.

As children of the nineties, my older sisters and I didn’t have technology to keep ourselves occupied, just one another and whatever game we could make up in the moment. The script was the same every year: Jessica and I sat in the middle; our biggest decision was whose legs took the inside and whose took the outside as we sprawled across the middle seat playing Barbies and making up our own secret language. Christin, the oldest, always had the back seat all to herself. She is seven years older than I am, and Jessica splits us in the middle; therefore, in Christin’s eyes, she had already paid her big-sister dues and got the luxury of a whole row for herself and Nancy Drew.

Those trips defined my childhood in a lot of ways. My dad wanted nothing more than to share his love for the outdoors with us girls, and my mom wanted to carry on one of her favorite traditions of family road trips, so they spent all year anticipating and planning for our summer camping adventures. My mom is the queen of preparation, so she would spend weeks making packing lists, planning activities for the car to keep us occupied, double-checking that she packed our tapes (remember when that was how we played music?) and the ultra-high-tech converter for playing CDs through the tape deck, triple-checking our first aid kit, and, of course, packing the trusty green bin that housed all our snacks for the days on the road.

All these years later, I have come to realize the important lessons my parents instilled in us amid the jokes and family bonding as we navigated west each summer. Since we camped the entire way, we weren’t bound by the tyranny of hotel reservations; instead, when we came to significant junctions or forks in the road, my parents would turn to us and ask, “Girls, which way: left or right?” We decided together, as a family, which path we wanted to take. At the time, it just seemed like part of the adventure, but now I can see it was actually a valuable lesson in adaptability. From the second row of the family Suburban, I learned that life isn’t always about following a predetermined path, but making choices in the moment and rolling with whatever comes when the course changes.