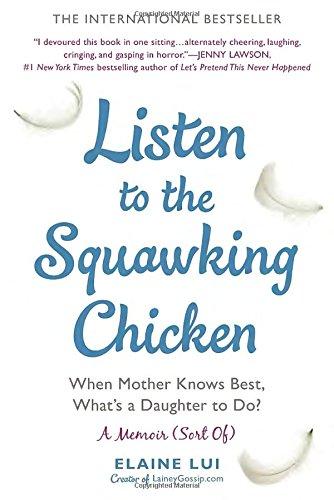 LISTEN TO THE SQUAWKING CHICKEN

When Mother Knows Best, What's a Daughter To Do? A Memoir (Sort Of)

When Elaine Lui was growing up, her mother told her, “Why do you need to prepare for the good things that happen? They’re good. They won’t hurt you. My job is to prepare you for the hard times, and teach you how to avoid them, whenever possible.” Neither traditionally Eastern nor conventionally Western, the Squawking Chicken raised her daughter drawing on Chinese fortune-telling, feng shui blackmail, good old-fashioned ghost stories, and shame and embarrassment in equal measure. And despite years of chafing against her mother’s parenting style, Elaine came to recognize the hidden wisdom—and immeasurable value—in her rather unorthodox upbringing.

When Elaine Lui was growing up, her mother told her, “Why do you need to prepare for the good things that happen? They’re good. They won’t hurt you. My job is to prepare you for the hard times, and teach you how to avoid them, whenever possible.” Neither traditionally Eastern nor conventionally Western, the Squawking Chicken raised her daughter drawing on Chinese fortune-telling, feng shui blackmail, good old-fashioned ghost stories, and shame and embarrassment in equal measure. And despite years of chafing against her mother’s parenting style, Elaine came to recognize the hidden wisdom—and immeasurable value—in her rather unorthodox upbringing.

Listen to the Squawking Chicken lays bare the playbook of unusual advice and warnings used to teach Elaine about hard work (“Miss Hong Kong is a whore”), humility (“I should have given birth to a piece of barbecue pork”), love and friendship, family loyalty (“Where’s my money?”), style and deportment (“Don’t be low classy”), finding one’s own voice (“Walk like an elephant, squawk like a chicken”) among other essentials. Along the way, Elaine poignantly reveals how her mother earned the nickname “Tsiahng Gai” or “squawking chicken” growing up in Hong Kong, enduring and rising from the ashes of her own hard times.

Listen to the Squawking Chicken is a loving mother-daughter memoir that will have readers laughing out loud, gasping in shock, and reconsidering the honesty and guts it takes to be a parent.

Elaine Lui is a celebrity gossip blogger and the voice behind LaineyGossip, a leading international celebrity news source followed by more than 1.5 million people internationally. Her TEDx Talk, “The Sociology of Gossip,” is about the critical place of gossip within modern pop culture. Elaine has been a reporter on CTV’s daily entertainment show, Etalk, since 2006, is now a co-host on CTV’s daily talk show, The Social, and previously worked for Covenant House Vancouver. Born in Toronto, she lived in Vancouver for thirteen years, before returning to Toronto.

“Authentic, heartbreaking, and funny. Lui writes with the truest form of humor, grounded in pain, honesty, and insight, and despite everything, Lui’s love for her mother shines true. This is a book that will challenge and resonate with mothers and daughters everywhere.”—Jean Kwok, New York Times–bestselling author of Girl in Translation and Mambo in Chinatown

“Elaine Lui has written one remarkable and dangerous book. It had me laughing till I rolled off the bed, rearranging my living room furniture in a panic at three a.m. to achieve proper feng shui, and calling my mother out of pure guilt. The Squawking Chicken could eat any Tiger Mom for lunch.” —Kevin Kwan, author of Crazy Rich Asians

“Lui’s ma is a caustic, brashly charismatic, take-no-prisoners, larger-than-life figure…a lovely read about a woman whose force of personality refuses to be ignored.”—Chicago Tribune

“Bold and fresh, Elaine Lui’s writing took me on a journey filled with bittersweet verve and breathtaking grace. Forget what you think you know about life, and enter the world of the Squawking Chicken. This is a love story you won’t soon forget.” —Ami McKay, author of The Birth House and The Virgin Cure

Elaine Lui tells us that Chinese women are taught to be humble and meek-not exactly the Squawking Chicken’s approach. How do you think Elaine has come to reconcile her mother’s demeanor with her own? Where in the book did you begin to see Elaine’s individuality take shape?

Elaine’s mother taught her that if she could tell the story of the worst thing that had ever happened to her, she would never be silenced. Do you agree? How are people burdened or liberated by their past?

The notion of filial piety appears throughout the book, and eventually we learn that Elaine and Jacek-who have decided against hatching a brood-won’t be reaping the returns of an obedient child. What’s your take on filial piety? Have your parents expected obedience from you and, if applicable, will you expect it from your children in turn?

Elaine discusses the challenge of bridging her ethnic culture with her Canadian identity. “Ma shamed me so that I would not suppress the Chinese part of myself to try to become something I could never be.” Shame is often used to repress unwanted thoughts and actions, but the Squawking Chicken uses shame to hone Elaine’s self-confidence. Is shame a useful tool for this? How did or didn’t it work for Elaine?

Feng shui is a constant force in Elaine’s life-in romance, house-hunting, and career choices. Were you surprised by the way feng shui has influenced her personal life? Do you use anything similar in your own?

The Squawking Chicken doesn’t believe in lauding another person’s good looks. (“So what pretty?”) Do compliments on physical appearance have value?

Do you believe, as the Squawking Chicken does, that a person needs deliberately limited the number of people you call close friends?

Elaine identifies her mother’s lack of empathy, which often manifests itself in her strict assessment of “Low Classy” people, as one reason she struggles to make and maintain friendships. To what standards do you hold your own friends? Do you think the Squawking Chicken’s expectations are, as Elaine believes, too lofty?

The Squawking Chicken isn’t afraid to share her material successes with others. When Elaine confronts her mother about showing off her new house to friends, the Squawking Chicken replies: “Your daddy work hard. Your daddy buy a big house. Be proud of your daddy!” Is there a line between pride and boastfulness? If so, where do you draw it?

How do you think the Squawking Chicken feels about having this book written about her life with her daughter, by her daughter?