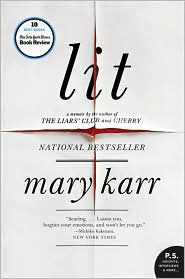 Lit is about getting drunk and getting sober; becoming a mother by letting go of a mother; learning to write by learning to live. Written with Karr’s relentless honesty, unflinching self-scrutiny, and irreverent, lacerating humor, it is a truly electrifying story of how to grow up—as only Mary Karr can tell it.

Lit is about getting drunk and getting sober; becoming a mother by letting go of a mother; learning to write by learning to live. Written with Karr’s relentless honesty, unflinching self-scrutiny, and irreverent, lacerating humor, it is a truly electrifying story of how to grow up—as only Mary Karr can tell it.

Mary Karr is a Guggenheim Fellow in poetry. She has won Pushcart Prizes for both verse and essays, and is the Peck Professor of Literature at Syracuse University. Her previous two memoirs, The Liars’ Club and Cherry, were New York Times bestsellers.

“Karr tells the story with the same down-to-earth writing-some of it funny-that she brought to her first two memoirs. . . . Her willingness to show herself in this light and the humility with which she writes about recovery and faith are testaments to the honesty of both her writing and her life.”—Nancy Connors, Cleveland Plain Dealer

“Howlingly funny…. In some ways, Lit is her most intimate book…. The overall impression is of a sorrowful narrative poem as humble and funny as it is beautiful. Karr is an ‘inveterate check grabber,’ she tells us, out of ‘the poor girl’s need to prove solvency.’ Perhaps a similar need drives her generosity on the page. Certainly her readers, once again, are the lucky beneficiaries.”—Mary Pols, Time

“Searing. . . . A book that lassos you, hogties your emotions and won’t let you go. . . . Chronicles with searching intelligence, humor and grace the author’s slow, sometimes exhilarating, sometimes painful discovery of her vocation and her voice as a poet and writer.”—Michiko Kakutani, New York Times

“Karr’s sharp and funny sensibility won me over to her previous two volumes, but what wins me over to Lit is the way her acute self-awareness conquers any hint that hers is the only version of this story. . . . As with all stories that surprise us, the specificity of the account gives it its punch. . . . Karr is full of regret, but she’s also as funny as ever on the subject of her own sinning. . . . The language often captures, precisely, the tension between the intellectual and the emotional, the artistic and the spiritual. This is a story not just of alcoholism but of coming to terms with families past and present, with a needy self, with a spiritual longing Karr didn’t even know she possessed. It sounds as if she was hellish to be around for much of the time she describes here, but she is certainly good company now.”—Valery Sayers, Washington Post

The first sentence of Lit is “Any way I tell this story is a lie.”  What does Mary mean by this? Is she a reliable storyteller? Is there a story in your family famous for its different versions? Is there a story you can’t tell without “feeling” like it’s partially untrue?

Mary refers to her mother as “a shadow stitched” to her feet,  and to herself and her mother as “dovetailing drunks” and as facing off “like a pair of mirrors”. What does this say about Mary’s relationship with her mother? Do all women feel this way about their moms? At what age is it most painful? At what age—if any—does it end?

Mary writes, “I sense the oppressive weight of my old self inside me pressing to run wild again.  My old mother I’m trying to keep in.” Have you ever found yourself wincing at how you resemble your mother?

How is Mary’s trip to college with Mother the “hairpin”, as she describes it, in her early life? This trip marks her introduction to real drinking, but it’s also the point at which Mary would “start furnishing [Mother] with reading instead of the other way around.” What does Mary mean by this, and what’s the significance of this transition? Was there an “official” transition to adulthood in your life? Was it marked by college, marriage, parenthood, career success, or something else?

“Words shape our realities,” Mary concludes when she registers the meaning of the Ernst Cassirer quote: “The same function which the image of God performs, the same tendency to permanent existence, may be ascribed to the uttered sound of language”. How does this realization frame Mary’s determination to become a poet? At what times do religion and poetry seem to do the same things for her?

Mary calls poetry “one of the sole spiritual acts in our mostly godless household” and poets “the gods I worshipped all my life” Has literature ever substituted for spirituality with you? In what ways has it done so?

Mary describes Daddy as a silent fixture of her adolescence.  How does her father’s silence emerge, later, as a threatening force?  How does her father’s silence compare to the silence of the Whitbread’s, and to Warren’s characteristic reserve?  If Mary understood early on that “words would define me, govern and determine me”, then in what way is “wordlessness” her enemy?

Why does Mary call her time in recovery a “nervous breakthrough”? Have the darker times in your own life preceded or manifested similar changes or moments of clarity?

Mary has “mysterious blanks” in her memory of fights with Warren. What are the glaring blanks in your own memory? Do you think these are genuine blanks of memories or memories that you have chosen to block out?

In what ways does Mary’s son Dev save her? If she had lost custody of him in a divorce, would she still have gotten sober? How have your children made you better, at time, or ground you to a nub in others?