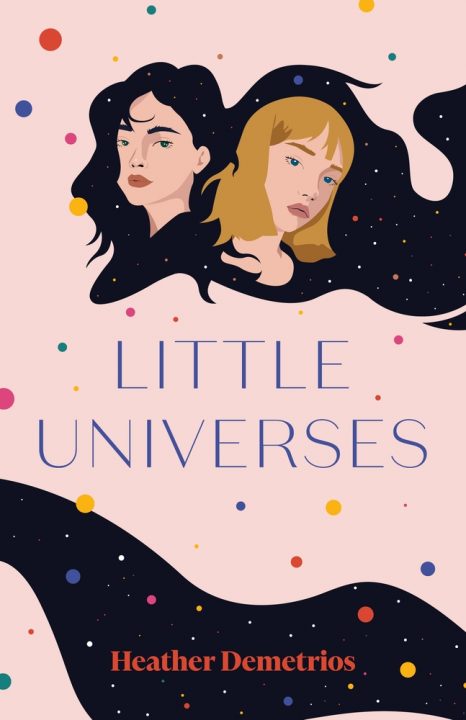 Heather Demetrios’s Little Universes is a book about the powerful bond between sisters, the kinds of love that never die, and the journey we all must make through the baffling cruelty and unexpected beauty of human life in an incomprehensible universe.

One wave: that’s all it takes for the rest of Mae and Hannah Winters’ lives to change.

When a tsunami strikes the island where their parents are vacationing, it soon becomes clear that their mom and dad are never coming home. Forced to move to Boston from sunny California for the rest of their senior year,

Heather Demetrios’s Little Universes is a book about the powerful bond between sisters, the kinds of love that never die, and the journey we all must make through the baffling cruelty and unexpected beauty of human life in an incomprehensible universe.

One wave: that’s all it takes for the rest of Mae and Hannah Winters’ lives to change.

When a tsunami strikes the island where their parents are vacationing, it soon becomes clear that their mom and dad are never coming home. Forced to move to Boston from sunny California for the rest of their senior year, each girl struggles with secrets their parents’ death has brought to light, and with their uncertainty about the future. Instead of bringing them closer, it feels like the wave has torn the sisters apart.

Hannah is a secret poet who wants to be seen, but only knows how to hide. The pain pills she stole from her dead father hurl her onto the shores of an addiction she can’t shake and a dealer who turns her heart upside down. When it’s clear Hannah’s drowning, Mae, a budding astronaut suddenly launched into an existential crisis—and unexpected love—must choose between herself and the only family she has left.

Heather Demetrios is a critically acclaimed author and writing coach. Her novels include I’ll Meet You There, Bad Romance, and Exquisite Captive. She is the recipient of the PEN New England Susan P. Bloom Discovery Award for her debut novel, Something Real, which is not at all impressive to her cat or imaginary friends.

“An unflinching, devastating, and compelling portrayal of life after insurmountable loss.” – Kirkus Reviews

THERE ARE PIECES OF STARS IN OUR GUTTERS.

It wasn’t a Nobel-winning astrophysicist who made this discovery, but a Norwegian jazz musician named Jon Larsen. A completely random human who’s into the cosmos and got to thinking.

His experiments led to the observation that these micrometeorites are EVERYWHERE—gutters, yes, and in our hair, the tops of cars, on the rosebushes in your front lawn. Stick out your tongue long enough, and perhaps you can SWALLOW THE STARS.

And it’s just raining down on us, all the time.

My mom has this book called Acorn by Yoko Ono and, I’m warning you right now, if you read it, you will never be the same again. It should maybe come with a warning label.

Mom says Yoko’s presence in the world is the universe’s way of reminding us all that we don’t have to spend our lives wearing business casual. Or sensible shoes.

Spend our lives. Minutes as currency. It’s like we’re paying God, handing Her our time in exchange for more breath: Here’s a minute, here’s another minute, another. And sometimes I want to be like, Can I have a refund? Or maybe an exchange. A new life. A new me. Because I’m only seventeen and I feel broke. Like I spent my life already.

Do you ever feel like your skin is a little too baggy, like a pair of jeans that you should probably get rid of, but can’t bring yourself to because maybe you wore them the night you lost your virginity or they’re your good-luck charm on test days? But you really want to get a new pair. Or some days your skin is too tight, like all of you got stuck in the dryer too long?

And that’s where Yoko comes in. She is the great reminder that It Doesn’t Have To Be This Way.

Whisper with me. Come on.

The sound of her name is just like these wooden wind chimes my mom keeps on our back porch. The wind comes in off the beach and bumps them around, soft wood clunking out poetry. Sound medicine. An incantation.

Yoko fronts her own rock band even though she’s a senior citizen, and she sees the truth of the world and writes about it and draws about it, too, and one time I got to see her art for real, and it made me cry, it was so good. Most people only know about Yoko because she was married to John Lennon. You know, the Beatle. He’s the imagine all the people guy. I’m a George girl, ’cause he’s the silent, sexy one who’s all enlightened and plays the sitar, but even I have to admit that John is the man.

People say Yoko broke up the Beatles, but that’s just dumb humans blaming a girl for boy problems. The thing is, people change. You know? You love someone, you make things with them, and then you realize you don’t fit anymore. And that’s what happened for John and Paul. They understood that it wasn’t working. No matter how good it was. Before.

In her book Acorn, Yoko has all these suggestions that she writes down for people to do. Like in “Connection Piece I”:

Whisper your name to a pebble.

Sometimes late at night I sneak out of the house and walk over to the beach. I go past the boardwalk, past those iconic Cali lifeguard huts, and the homeless guys and stoners, right down to where the water kisses the shore. I pick up a pebble and I whisper my name to it. Then I throw it into the ocean.

Maybe it will tell the crabs or jellyfish or dolphins my name when they come by.

Maybe someday the whole ocean will be whispering

I always have a Sharpie in my pocket, and when no one’s looking, I write my own acorns. They’re not like Yoko’s. They’re more like secrets I whisper to the whole world. Or just thoughts I want to share, but have no one to share them with because if I did they would give me that blank look they always do when I say things like what I write down with my Sharpies. I say stuff like that and Dad goes, “Maybe we should make an appointment with Dr. Brown,” and then I say I don’t really need to sit in her stupid paisley chair and talk about my problems and I walk out before he can start rattling off statistics about adolescent junkies, though he would never use that word. Neither would I. Because I’m not one—a junkie, no matter what they say in group. Mom tries to sweeten the deal with some Reiki from her friend Cynthia after the Dr. Brown appointments, to balance things out.

There isn’t enough Reiki in the world to fix me, but I don’t tell her that.

I wrote this on a stop sign a few days ago, after my first week of senior year:

Mae would say this is a scientifically unsound assertion, but she doesn’t understand that some things are true even if you don’t have proof.

I don’t know why I do them. The acorns. It’s weird, I guess, to leave little pieces of yourself all over Los Angeles and never go back to pick them up.