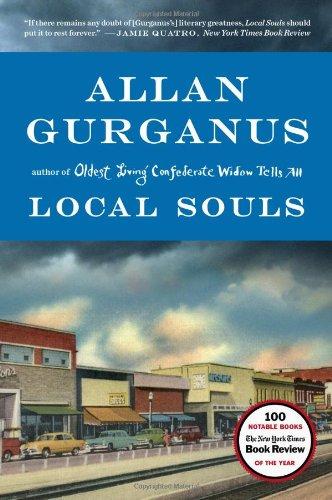 In Local Souls, Allan Gurganus offers us three linked novellas, set in legendary Falls, North Carolina—site of his beloved Oldest Living Confederate Widow Tells All. We find the small town revolutionized by freer sexuality, loosened family ties, and secular worship. Gurganus celebrates those citizens who stayed home but uncovers certain old habits—adultery, incest, obsession—very much alive in this “Winesburg, Ohio” with high-speed Internet. Writing about erotic hunger and social embarrassment with Twain’s knife-edged glee, Gurganus dramatizes the passing of Hawthorne’s small-town America. He brings the twisted hilarity of Flannery O’Connor kicking into our new century. Each novella “delivers an ending of true force” (John Irving). Each deepens the luster of Gurganus’s well-known empathy and laughter. His dark comedy gives us indelible characters worth loving. Here is a universal work about a village.

White People and Oldest Living Confederate Widow Tells All. Winner of the Los Angeles Times Book Prize, Gurganus is a Guggenheim Fellow and a member of the American Academy of Arts and Letters. Adaptations of his fiction have earned four Emmys. A resident of his native North Carolina, he lives in a village of six thousand souls.

“A tour de force in the tradition of Hawthorne. It shows that Gurganus’s vast creative and imaginative powers, still rooted in the local, are increasingly universal in scope and effect. The book is an expansive work of love. ”— New York Times Book Review

“Each novella in Local Souls . . . is guided . . . by the centrifugal force of memory, heart and a playful, agile mind. . . . They will please readers who have been waiting for more from an admired writer who is funny, appropriately dark and can magically twirl a sentence.” —Chicago Tribune, Editor’s Choice

“The beloved author whose literary bona fides rank him among the most revered writers of the last 50 years, Gurganus has an eye for gesture large and small, an ear for voice at once razor-sharp and tender, and a way with finding the absolutely precise moment of dramatic tension.”— Boston Globe

“This book underscores what we have long known—Gurganus stands among the best writers of our time.”—Ann Patchett

The character Fearnot is given her nickname before the events of her story unfold. How does your understanding of that name change over the course of the story? How do her actions and experiences reflect and affect the meaning of her name?

Fearnot breaks two major sexual taboos over the course of her story. How does the second reflect, answer, or, possibly, redeem the first? What did you make of the revelation at the end, about who the couple at the theater turned out to be? Were you surprised?

In “Saints Have Mothers,” Jean Mulray’s relationship to her daughter, Caitlin, is characterized by jealousy, resentment, and possibly a hint of eroticism, in addition to pride and maternal love. How does this novella—like the previous one—explore what is forbidden and unspoken in family relationships? Did you empathize with Jean’s complicated feelings towards her daughter as much or more than you empathized with Fearnot’s feelings towards her son? How are they similar, and how are they different?

Describe the role that the larger community of Falls plays in “Saints Have Mothers.” How are Jean and Caitlin perceived by their peers in town? How does that perception affect them and their relationship, and how does it change over the course of the novella?

Shortly after Caitlin returns, Jean says, “Like the rest of Falls, I had turned my child into someone ideal then immortal” (163). What do you make of this? How does the flesh-and-blood Caitlin who returns alter Jean’s—and your—perception of the “ideal then immortal” Caitlin that they were imagining in her absence? Can you recall a time in your life when someone you know was idealized in death? What would it have felt like if that person had suddenly reappeared?

How do you characterize the narrator’s relationship with Doc Roper in “Decoy”? Why does Bill Mabry feel so betrayed when Roper retires?

“My doctor, best on earth, is reading me alive again!” says Bill near the end, when the doctor appears by his side. Describe what happens in the final scene of the novel. Is Bill’s death, with the doctor at his side, redemptive? Why or why not?

Jean Mulray describes her daughter Caitlin as a “Somebody” and says of herself, “Us others? At our luckiest we’re with somebody” (89). Each of the novellas in Local Souls has at its center a “Somebody:” someone magnetic and fascinating, whom the town, and the narrator, can’t look away from. What do Fearnot, Caitlin Mulray, and Doc Roper have in common? Where do they differ? How are the narrators of the three novellas—the unnamed first-person narrator of “Fear Not;” Jean Mulray of “Saints Have Mothers;” and Bill Mabry of “Decoy”—alike in their perception of and relationship to these Somebodies? How are they different? Do you have a Somebody in your life? Can you relate to these narrators, in the hold these Somebodies have on them?

Describe the community of Falls. How does it compare to your town?