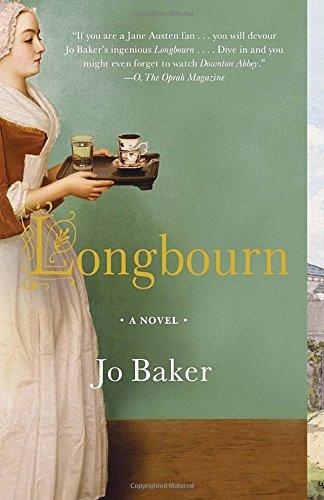 In Pride and Prejudice, Jane Austen painted an unforgettable portrait of the Bennet family and their adventures in courtship and love, all set against the background of their country estate, Longbourn. Now, in a wonderfully fresh perspective on life at Longbourn, Jo Baker goes behind the scenes and down the stairs to introduce the servants who kept the household running and the Bennets comfortable and blissfully oblivious to everyday toil.

In Pride and Prejudice, Jane Austen painted an unforgettable portrait of the Bennet family and their adventures in courtship and love, all set against the background of their country estate, Longbourn. Now, in a wonderfully fresh perspective on life at Longbourn, Jo Baker goes behind the scenes and down the stairs to introduce the servants who kept the household running and the Bennets comfortable and blissfully oblivious to everyday toil. The questions, discussion topics, and suggestions for further reading that follow are designed to enhance your group's discussion of Jo Baker's engaging and revealing look at a different side of life in early-nineteenth-century England.

The staff at Longbourn is in many ways a family: Mrs. Hill, the motherly housekeeper; her husband, who sees to tasks both inside and outside the mansion; Sarah, the hardworking housemaid; and young Polly, the naïve, often distracted assistant to Mrs. Hill and Sarah. When a new footman named James Smith arrives, things change for all of them-especially for the independent-minded Sarah, whose initial disdain for James gives way to feelings she has never experienced before.?As the household frets over the future of the family estate, the Bennet girls navigate the complexities of finding husbands, and Sarah awakens to her own romantic choices, Jo Baker reveals both the vast distance between and intimate connections among the inhabitants of Longbourn. A brilliant reimagining of Austen's beloved novel, Longbourn is also a portrait of the disappointments, dreams, struggles, and secrets of the lower classes that stands entirely on its own.

Jo Baker was born in Lancashire, England, and educated at Oxford University and Queen’s University Belfast. She is the author of the novels The Under­tow, Offcomer, The Mermaid’s Child, and The Telling. She lives in Lancaster.

“Rich, engrossing, and filled with fascinating observations. . . . If you are a Jane Austen fan . . . you will devour Jo Baker’s ingenious Longbourn.”

“A witty, richly detailed re-imagining. . . . Fans of Austen and Downton Abbey will take particular pleasure in Longbourn, but any reader with a taste for well-researched historical fiction will delight in Baker’s involving, informative tale.”

“A triumph: a splendid tribute to Austen’s original but, more importantly, a joy in its own right, a novel that contrives both to provoke the intellect and, ultimately, to stop the heart.”

“A bold novel, subversive in ways that prove surprising, and brilliant on every level.”

“He was such a frustrating mixture of helpfulness, courtesy and incivility that she could indeed form no clear notion of him” (p. 39). What lies at the heart of Sarah's confusion about James? Are her feelings based on misapprehensions of James's attitude toward her? Is James responsible for creating the false impressions and mixed signals Sarah finds so frustrating? If so, what does it reflect about his confusion and lack of experience? Are James's perceptions of Sarah as limited as her perceptions of him? Why or why not?

Despite the great difference between their stations in life, in what ways are both Sarah and Elizabeth defined by the social strictures of the time? Are their assumptions about what they can and cannot achieve dictated by society or do they reflect their individual personalities?

Why is Sarah attracted to Mr. Bingley's servant Ptolemy? What effect does his attention have on her and her sense of herself as a woman? Does their flirtation influence her behavior with James? In the end, what does James offer her that is lacking in her relationship with Ptolemy?

Discuss the significance of the discoveries Sarah makes when she secretly explores James's room (pp. 64-65). What does the scene reveal about Sarah's grasp of the emotional complexities behind James's carefully constructed façade? In what respects in this a turning point in the novel?

What similarities are there between the progression of the courtships of Sarah and James and of Elizabeth and Darcy? What part does pride play in the way Sarah initially responds to James? Is Elizabeth guilty of the same kind of misplaced pride in her rejection of Darcy's first marriage proposal?

Are James and Sarah more open and honest with themselves and with each other than Darcy and Elizabeth? Is Sarah able to act on her feelings and make decisions in a way that the Bennet girls cannot? How does this affect the way her relationship with James unfolds? Discuss, for example, Sarah's and James's lack of inhibitions about (and downright enjoyment of) sex.

Baker details the harsh daily life of Sarah and the other servants. In addition to the descriptions of the backbreaking work they perform-from hauling water on freezing mornings and emptying chamber pots to scrubbing dishes, laundering mud-spattered petticoats, and washing rags soaked with menstrual blood-how does she illustrate the more subtle yet no less humiliating aspects of being a servant? What particular interactions between the Bennets and various members of the staff bring out the true nature of the relationship between the classes?

Baker also draws a sweeping historical picture that is largely absent from Pride and Prejudice, including insights into economic and social realities that influence everything from the privileges enjoyed by the wealthy to institutions such as the military. Does the fact that Mr. Bingley's wealth comes from sugar and tobacco, industries dependent on the exploitation of slave labor, affect your understanding of the world the Bennets inhabitant? Discuss the difference between what the Militia represents in Pride and Prejudice and the way it is depicted in Longbourn.

Why do you think Baker includes the long section devoted to James's experiences during the Napoleonic Wars (pp. 246-59)? Were you taken aback by the brutality Baker describes? What do James's actions and their consequences show about the prejudices and injustices suffered by young men like James? What facets of his character come to light? How does his experience as a soldier enhance James's role as a romantic hero?

Baker continues her story a bit beyond the ending of Pride and Prejudice. Do you find her speculations about what happens to Mr. and Mrs. Bennet, their daughter Mary, Mr. and Mrs. Hill, and Polly, satisfying (pp. 325-27)?

Polly and Sarah are both orphans, a common character in nineteenth-century novels, including such well-known works as Wuthering Heights and Jane Eyre. Why is a child who has lost or been abandoned by her parents such a persistent and powerful figure? Are there similarities between Sarah and Brontë’s Jane Eyre?

Another motif Longbourn shares with several nineteenth-century novels (particularly works in the Gothic tradition) is the mysterious or hidden background of a significant character—James in this work, Heathcliff in Wuthering Heights, the woman in the attic in Jane Eyre. What hints does Baker give about James’s origins when he first appears? How does the truth about him evolve and become clearer for both Sarah and the reader? Are the connections between James and members of the household believable? How do you think Jane Austen, whose Northanger Abbey is a famous parody of the Gothic novel, would react to this aspect of Longbourn?

Are there aspects of Longbourn that you were surprised to find in a literary novel set in the nineteenth century? In what ways does Longbourn reflect and embrace the sensibilities of the twenty-first century? Discuss, for example, Mr. Hill's secret life; the portrayal of Mr. Bingley's servant Ptolemy; the graphic descriptions of Sarah and James's sexual encounters; and Sarah's decision to leave Pemberley and set out on her own.

Does a reader's enjoyment of Longbourn depend on a familiarity with Pride and Prejudice? How does Baker assert an independent voice and vision while using the framework of Austen's novel?

Several books inspired by Pride and Prejudice have recently been published. How does Longbourn compare to other books you have read about the lives of the Bennets and the Darcys? Why do you think reworkings of Austen have become so popular?