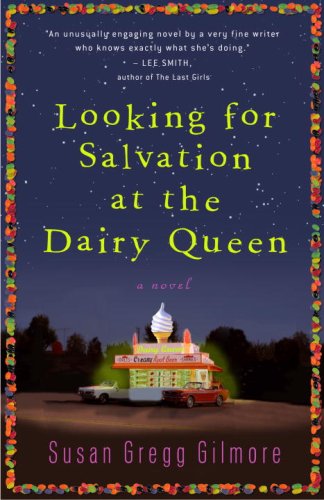 LOOKING FOR SALVATION AT THE DAIRY QUEEN

It’s the early 1970s. The town of Ringgold, Georgia, has a population of 1,923, one traffic light, one Dairy Queen, and one Catherine Grace Cline. The daughter of Ringgold’s third-generation Baptist preacher, Catherine Grace is quick-witted, more than a little stubborn, and dying to escape her small-town life.

Every Saturday afternoon, she sits at the Dairy Queen, eating Dilly Bars and plotting her getaway to the big city of Atlanta. And when,

It’s the early 1970s. The town of Ringgold, Georgia, has a population of 1,923, one traffic light, one Dairy Queen, and one Catherine Grace Cline. The daughter of Ringgold’s third-generation Baptist preacher, Catherine Grace is quick-witted, more than a little stubborn, and dying to escape her small-town life.

Every Saturday afternoon, she sits at the Dairy Queen, eating Dilly Bars and plotting her getaway to the big city of Atlanta. And when, with the help of a family friend, the dream becomes a reality, Catherine Grace immediately packs her bags, leaving her family and the boy she loves to claim the life she’s always imagined. But before things have even begun to get off the ground in Atlanta, tragedy brings her back home. As a series of extraordinary events alters her perspective–and sweeping changes come to Ringgold itself–Catherine Grace begins to wonder if her place in the world may actually be, against all odds, right where she began.

Susan Gregg Gilmore has written for the Chattanooga Times Free Press, the Los Angeles Times, and the Christian Science Monitor.

“This is Susan Gregg Gilmore’s first novel, but her voice is similar to that of Fannie Flagg. Readers of Southern stories will enjoy the poignant self-discovery journey of this lovable heroine.”
—Tampa Tribune

“Gilmore tells her tale with gentle humor and genuine regard for her characters.”—Omaha World-Herald

“If I had to make a comparison, I would compare Susan Gregg Gilmore to Fannie Flagg, but Gilmore more than holds her own. This is an unusually engaging novel by a very fine writer who knows exactly what she is doing.”—Lee Smith, author of The Last Girls

“Susan Gregg Gilmore’s debut novel, Looking for Salvation at the Dairy Queen, is storytelling at its best, entertaining and lively and full of surprises. Catherine Grace Cline, the endearing witty heroine, gives her domestic journey titles of Biblical proportion as she finds more than salvation along the way.”—Jill McCorkle, author of Carolina Moon

Although dubbed a coming-of-age novel, Looking for Salvation at the Dairy Queen is, possibly more than anything else, a story about forgiveness. How does this theme of forgiveness affect Catherine Grace, her most important relationships, and ultimately her search for contentment?

Catherine Grace is born and raised in a small town called Ringgold, Georgia. She never liked the town or its name, saying that the best she “could figure was that it was these darn hills that I had stared at every morning from my bedroom window that formed the ring, the ring that had kept me hostage for the first eighteen years of my life.” (p. 5). How does the geography shape Catherine Grace’s attitude about her home, her family and the people of Ringgold, Georgia?

Catherine Grace is convinced that her happiness is waiting for her somewhere else, most likely in Atlanta, “a world with enough lights turned on at night that it makes it hard to see the stars.” (p. 9) She is convinced that there she will find the “salvation” she has been so desperately wanting. What does salvation mean to you and what do you think it means for Catherine Grace?

Reverend Cline is a good-looking, charismatic preacher managing the only pulpit in town. How does his position as Ringgold’s sole preacher shape his daughter’s journey? And how does his relationship with the pretty young Sunday school teacher impact his daughter’s view of her father and of herself?

Although Catherine Grace is not raised with a mother, she is surrounded by many strong mother figures, most notably Gloria Jean as well as Miss Mabie and Flora. In what ways do you think these women influenced Catherine Grace and contributed to the young woman she became? How do you think she would have been different, had her mother lived?

Lolly Dempsey and Catherine Grace are best friends. How does Lolly’s relationship with her abusive mother influence Catherine Grace’s thoughts about her own mother? Does Lolly share her friend’s dream to leave town and, if not, why?

Whether it’s a Dilly Bar at the Dairy Queen, creamed corn at church suppers or a jar of strawberry preserves, food plays an important role in this story. Catherine Grace herself was convinced “that even my own mama considered the tomato a symbol of a person’s God-fearing commitment to biblical and civic values.” (p.11) How important is food in the telling of a Southern story? How does food affect not only the telling of this story but Catherine Grace’s personal journey?

After longing to leave Ringgold for most of her life, did Catherine Grace make the right decision in choosing to stay there after her father’s passing?  Do you think she eventually left to explore the bigger world she had dreamed about for so many years?

Did Gloria Jean know more about Lena Mae’s drowning or was she as innocent as the girls were?  And do you think she believed her friend’s departure the second time was in the best interest of her two daughters?