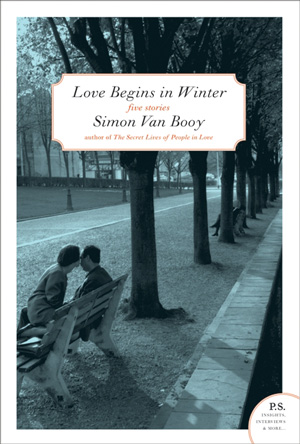 On the verge of giving up—anchored to dreams that never came true and to people who have long since disappeared from their lives—Van Booy’s characters walk the streets of these stark and beautiful stories until chance meetings with strangers force them to face responsibility for lives they thought had continued on without them.

On the verge of giving up—anchored to dreams that never came true and to people who have long since disappeared from their lives—Van Booy’s characters walk the streets of these stark and beautiful stories until chance meetings with strangers force them to face responsibility for lives they thought had continued on without them.

Simon Van Booy grew up in rural Wales. He is the author of The Secret Lives of People in Love and Love Begins in Winter, which won the Frank O’Connor International Short Story Award. He is the editor of three philosophy books, titled Why We Fight, Why We Need Love, and Why Our Decisions Don’t Matter, and his essays have appeared in the New York Times, The Daily Telegraph, and The Guardian, and on NPR. He lives in New York City, where he teaches at the School of Visual Arts and is involved in the Rutgers Early College Humanities program for young adults living in underserved communities. He was a finalist for the Vilcek Prize for Creative Promise, and his work has been translated into thirteen different languages.

“Love Begins in Winter brings to life the wistfulness of youth and the possibilities of young love with clear and graceful prose.”—Jamie Saul, author of Light of Day

“Beautiful…each of these stories has moments of sheer loveliness.”—Publishers Weekly

“Simon Van Booy seems to start with a story in mind and then to turn it into a poem without losing its narrative power. Love Begins in Winter is an exquisite show of force.”—Roger Rosenblatt, author of Lapham Rising and Beet

In the title short story, why do the two main characters hold on to physical things—acorns, stones, mittens, the grandfather’s broken chair? Do you see these objects as physical burdens or as lovingly preserved souvenirs? What is your most precious possession and why?

In Love Begins in Winter, the narrator muses that, “The most significant conversations of our lives occur in silence” (42). Do you agree with this statement? Why or why not?

When Bruno and Hannah release their kites into the air in Love Begins in Winter, how does this simple action reflect how they have lived for the past 20 years?

Do you think that the act of the narrator in “Tiger, Tiger” biting her boyfriend at the end of the story is an acceptable regression to her child-like state—a playful reinvention and display of her love? Or do you think she has just gone crazy? Do you think they stay together in the end? Why or why not?

In “The Missing Statues,” discuss the relationship between the two cities of Las Vegas and Rome. Do you think it’s strange that anyone would find beauty in a city like Las Vegas?

In “The Coming and Going of Strangers,” do you agree with Walter’s understanding of only experiencing one pure first love? What does this contribute to your discovery that Walter ends up marrying Jane?

Also in “The Coming and Going of Strangers,” why do you think the farmer stopped to pick up Walter’s father and the child? Was it because he was in World War II?

Why does George in “The City of Windy Trees” live such an isolated life? Do you think George did the right thing by going to see his unknown daughter Lotta, in Sweden? What would you have done?

In George’s letter to his sister Helen, he writes “I regret things I haven’t done—rather than things I have—strange eh?” What sorts of things do you think George wishes he’d done? Do you feel the same about your life?

In “The City of Windy Trees,” all the adults work together to make a child’s life happy. Is this true for other children in the book? Would you agree with the idea that children are the most important characters in Van Booy’s fiction?

When Lotta and George are ice skating in “The City of Windy Tress”, George breaks away “to skate clumsily but without falling over” (224). What type of metaphor for parenting is this? Do you find this to be true in your own life if you’re a parent, or in the lives of other parents you know?