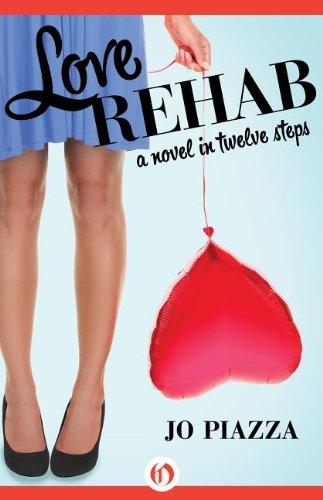 A Novel in Twelve Steps

Sophie isn’t dealing with her breakup well. Dumped by her boyfriend, Eric, for his sexting, D-cupped, young Floozy McSecretary, Sophie leaves Manhattan and lands back in her hometown, crushed and pajama-bound, blaming herself and begging her ex for a second chance.

But when her best friend, Annie, gets in trouble for driving drunk and is forced to go to an Alcoholics Anonymous meeting,

Sophie isn’t dealing with her breakup well. Dumped by her boyfriend, Eric, for his sexting, D-cupped, young Floozy McSecretary, Sophie leaves Manhattan and lands back in her hometown, crushed and pajama-bound, blaming herself and begging her ex for a second chance.

But when her best friend, Annie, gets in trouble for driving drunk and is forced to go to an Alcoholics Anonymous meeting, something clicks in Sophie’s strung-out mind. Women need love rehab, she realizes, to help fix the craziness that comes along with falling for someone.

If you start it, they will come. When she opens up her home to the obsessed and lovelorn, Sophie finds a way to help women out there who have overdosed on the wrong men—and she saves herself in the process.

Love is a drug and the only things that can save us are the steps, rules, and one another. Step one: Admit you have a problem, and keep the hell away from Facebook.

Jo Piazza is the executive news director of In Touch Weekly and Life & Style Weekly. Her journalism has appeared in the Wall Street Journal, the New York Times, Glamour, New York magazine, and the Huffington Post. A graduate of the University of Pennsylvania and the Columbia School of Journalism, Piazza is also the author of Celebrity, Inc.: How Famous People Make Money. Love Rehab is her first novel. She lives in Manhattan with her giant dog

“If you’ve ever had your heart broken and then cut your own bangs, read this book. I laughed so hard I made people around me uncomfortable.”—Paula Froelich, Mercury in Retrograde

“Love Rehab is for anyone who has experienced heartache, heartbreak, or made some not so savvy decisions in the romance department-in other words-everyone.”—Dana Ravich, The Weekend Makeover: Get A Brand New Life by Monday Morning

“After reading Love Rehab I know I can officially be marked as a “hopeless romantic pushover” because I love seeking a happily-ever-after ending! But this one surprised me!!”—Dr. Gilda Carle, “30-Second Therapist” Today Show

“Love Rehab will appeal to everyone who’s ever loved and lost…and then refused to lose. That rare romantic comedy that has equal parts humor and heart, brought to life by writing filled with wit and empathy. A terrific debut.”—Jason Pinter, The Mark

Early on in the story, we find out that Sophie is a member of Match.com. Have you ever tried online dating? If so, which one(s)? Was your experience favorable? Would you do it again? Care to share any stories with the group?

As the story progresses, Sophie, Annie, and their friends become increasingly vulnerable, honest and open. Do you think this made them more relatable? Was there any point in the story when you felt uncomfortable—for them or yourself—in the face of this newfound vulnerability?

We meet anthropologist Dr. Helen Fisher of Rutgers University. Dr. Fisher really does exist. She really has written a book called Why We Love. And her findings reported in Love Rehab are, indeed, true. We learn that people in the throes of early romantic love experience a dopamine rush at the same levels as those addicted to cigarettes or even cocaine. Would you agree with her findings? Have you ever found yourself in the midst of this kind of chemical reaction? Do you find it exhilarating? Terrifying? None of the above? What was your most extreme case?

There’s mention of “the evolution of the beginning of love in the digital age”, which starts with texting, moves to Gchatting and then on to high-frequency phone calls. Is this how things fall into place in your world? Do you think it works? Is this the best way to get to know someone?

We meet Joe. Sophie notes he wasn’t invited to their LAA meeting because men nurse broken hearts “in a different way than women.” Do you think this is true? If so, why do you think that is?

At one point, Sophie calls herself out as a “love pusher”—wanting her boyfriends to like her so much that she never considers whether she actually likes them and noting that “it felt good to make someone like me.” Do you think it’s possible to make someone like you? Have you ever tried? What was the outcome?

In addition to the twelve steps, there are seven rules, ranging from seeking the grand gesture to not needing to be “See you next Tuesday” about things. Did you have a favorite rule? If so, which one and what made it so perfect for you?

Sophie, Annie, Princess, Stella—the list goes on. Love Rehab is filled with characters familiar to all of us. Some we love. Some…maybe not so much. Did you have a favorite character? If so, who and why? And who really got under your skin? Who was your least favorite character in the story?

Were you glad when Sophie and Joe hooked up? Were you expecting it to happen? What did you think when they decided to spend time apart to take care of mending their own lives. Were you worried they might not get back together again? Would you rather have seen Sophie get back together with Eric?

If you were to set-up your own Love Rehab group: what would it look like?

Last question: What’s the craziest thing you’ve ever done in the name of love?