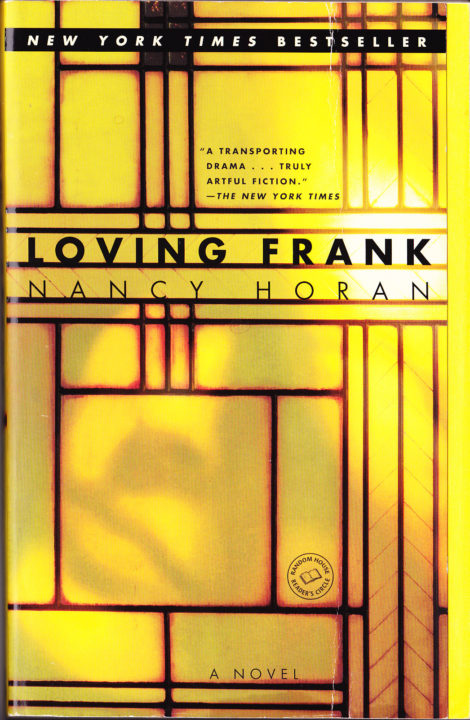 I have been standing on the side of life, watching it float by. I want to swim in the river. I want to feel the current.

So writes Mamah Borthwick Cheney in her diary as she struggles to justify her clandestine love affair with Frank Lloyd Wright. Four years earlier, in 1903, Mamah and her husband, Edwin, had commissioned the renowned architect to design a new home for them. During the construction of the house, a powerful attraction developed between Mamah and Frank, and in time the lovers, each married with children, embarked on a course that would shock Chicago society and forever change their lives.

I have been standing on the side of life, watching it float by. I want to swim in the river. I want to feel the current.

So writes Mamah Borthwick Cheney in her diary as she struggles to justify her clandestine love affair with Frank Lloyd Wright. Four years earlier, in 1903, Mamah and her husband, Edwin, had commissioned the renowned architect to design a new home for them. During the construction of the house, a powerful attraction developed between Mamah and Frank, and in time the lovers, each married with children, embarked on a course that would shock Chicago society and forever change their lives.

In this ambitious debut novel, fact and fiction blend together brilliantly. While scholars have largely relegated Mamah to a footnote in the life of America’s greatest architect, author Nancy Horan gives full weight to their dramatic love story and illuminates Cheney’s profound influence on Wright.

Drawing on years of research, Horan weaves little-known facts into a compelling narrative, vividly portraying the conflicts and struggles of a woman forced to choose between the roles of mother, wife, lover, and intellectual. Horan’s Mamah is a woman seeking to find her own place, her own creative calling in the world.

Mamah’s is an unforgettable journey marked by choices that reshape her notions of love and responsibility, leading inexorably ultimately lead to this novel’s stunning conclusion. Elegantly written and remarkably rich in detail, Loving Frank is a fitting tribute to a courageous woman, a national icon, and their timeless love story.

Nancy Horan, a former journalist and longtime resident of Oak Park, Illinois, now lives and writes on an island in Puget Sound.

“It takes great courage to write a novel about historical people, and in particular to give voice to someone as mythic as Frank Lloyd Wright. This beautifully written novel about Mamah Cheney and Frank Lloyd Wright’s love affair is vivid and intelligent, unsentimental and compassionate.” —Jane Hamilton, author of When Madeline was Young

“I admire this novel, adore this novel, for so many reasons: The intelligence and lyricism of the prose. The attention to period detail. The epic proportions of this most fascinating love story. Mamah Cheney has been in my head and heart and soul since reading this book; I doubt she’ll ever leave.”—Elizabeth Berg, author of We Are All Welcome Here

“Loving Frank is a novel of impressive scope and ambition. Like her characters, Horan is going for something big and lasting here, and that is to be admired. In writing about tenderness between lovers or describing a physical setting, she uses prose that is is knowing and natural. At other times, she allows us a glimpse of the hand of fact guiding the hand of art, taking it places where it might not necessarily have chosen to go.“ —The Washington Post

“Horan best evokes Mamah’s troubled personality by means of delicately rendered reflections on the power of the natural world, from which her lover drew inspiration: watching her children rapturously observe a squirrel as it pulls apart wheat buds or taking pride in the way the house that Wright built for them in Wisconsin frames the landscape.” —The New Yorker

1. Do you think that Mamah is right to leave her husband and children in order to pursue her personal growth and the relationship with Frank Lloyd Wright? Is she being selfish to put her own happiness and fulfillment first?

2. Why do you think the author, Nancy Horan, gave her novel the title Loving Frank? Does this title work against the feminist message of the novel? Is there a feminist message?

3. Do you think that a woman today who made the choices that Mamah makes would receive a more sympathetic or understanding hearing from the media and the general public?

4. If Mamah were alive today, would she be satisfied with the progress women have achieved or would she believe there was still a long way to go?

5. In Sonnet 116, Shakespeare writes, “Let me not to the marriage of true minds/Admit impediments. Love is not love/That alters where it alteration finds. ..” How does the relationship of Mamah and Frank bear out the sentiments of Shakespeare’s sonnet? What other famous love matches fill the bill?

6. Is Mamah’s story relevant to the women of today?

7. Is Frank Lloyd Wright an admirable figure in this novel? Would it change your opinion of him to know that he married twice more in his life?

8. What about Edwin Cheney, Mamah’s husband? Did he behave as you might have expected after learning of the affair between his wife and Wright?

9. Edwin’s philosophy of life and love might be summed up in the following words from the novel: “Tell her happiness is just practice. If she acted happy, she would be happy.” Do you agree or disagree with this philosophy?

10. “Carved over Wright’s fireplace in his Oak Park home are the words “Life is Truth.” What do you think these words mean, and do Frank and Mamah live up to them?

11. Why do you think Horan chose to give her novel the epigraph from Goethe, “One lives but once in the world.”?

12. When Mamah confesses her affair to her friend Mattie, Mattie demands, “What about duty? What about honor?” Discuss some of the different meanings that characters in the novel attach to these two words.

13. In analyzing the failure of the women’s movement to make more progress, Mamah says, “Yet women are part of the problem. We plan dinner parties and make flowers out of crepe paper. Too many of us make small lives for ourselves.” Was this a valid criticism at the time, and is it one today?

14. Why does seeing a performance of the opera Mefistofele affect Mamah so strongly?

15. Why is Mamah’s friendship with Else Lasker Schuler important in the book?

16. Ellen Key, the Swedish feminist whose work so profoundly influences Mamah, states at one point, “The very legitimate right of a free love can never be acceptable if it is enjoyed at the expense of maternal love.” Do you agree?

17. Another of Ellen Key’s beliefs was that motherhood should be recompensed by the state. Do you think an idea like this could ever catch on in America? Why or why not?

18. Is there anything that Frank and Mamah could have done differently after their return to America that would have ameliorated the harsh welcome they received from the press? Have things changed very much in that regard today?

19. What part did racism play in Julian Carlton’s crime? Were his actions the product of pure insanity, or was he goaded into violence?