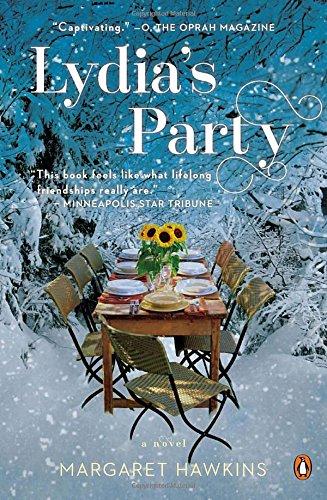 Chicago winters are notoriously long, but for almost twenty years come January Lydia’s friends have gathered for a cherished ritual and blow-out evening. Their host’s annual party offers them good food, wine, and a much-needed dose of conviviality on what often “turned out to be the coldest night of the year” (p. 4). Only tonight, Lydia is preoccupied with something other than her famed spicy chicken stew.

Now fifty-four, Lydia was once an aspiring painter who taught art classes to pay the bills. After her position at a suburban community college became permanent,

Chicago winters are notoriously long, but for almost twenty years come January Lydia’s friends have gathered for a cherished ritual and blow-out evening. Their host’s annual party offers them good food, wine, and a much-needed dose of conviviality on what often “turned out to be the coldest night of the year” (p. 4). Only tonight, Lydia is preoccupied with something other than her famed spicy chicken stew.

Now fifty-four, Lydia was once an aspiring painter who taught art classes to pay the bills. After her position at a suburban community college became permanent, Lydia gradually let teaching replace creating. Two decades pass, and suddenly-or so it seems to Lydia-her artistic dreams are likely on permanent hold, her romantic life is complicated, and she is no longer even “the woman who looks incredibly young for her age” (p. 6).

As Lydia prepares the feast, she contemplates the expensive French cooking pot she’d impulsively purchased. “She felt a little guilty. The cost, including overnight shipping, would have fed a family of four for a week” (p. 12). Yet, having lived frugally all her life, she is now determined to pursue frivolous indulgences. After all, these days she finds herself living with her ailing dog, Maxine, and her ex-husband, Spence, a down-on-his-luck musician who inhabits her basement rent-free.

Later, over a table overflowing with a cornucopia of food and wine, and with the enormous Maxine warming their feet, the women revel in sharing gossip and secrets while also laughing uproariously at past party exploits. Several of the women are artists, and their friendships are complicated by ambition and jealousy. All the women are pondering their lives and wondering “what’s next?” now that they are no longer young enough to easily attempt reinvention.

Bound primarily by friendship with Lydia, tonight’s partygoers are a potluck mix of personalities and backgrounds. Norris is a wealthy, internationally renowned painter, while Celia struggles to stay financially afloat. Jayne is happy in her stable marriage, but Betsy feels disconnected from her husband. Elaine has lived free of romantic entanglements, whereas Maura is defined by the twenty-one years she spent as her boss’s mistress.

Not all of them are looking forward to the night’s festivities, however. Norris knows that the others dislike her abrasive personality, and some of them resent her success. “What they didn’t know . was that she was nicer to them, or at least to Lydia, than she was to almost anyone else” (p. 52). She drives to Lydia’s, certain that this year’s party will be her last.

With wisdom, humor, and compassion, Margaret Hawkins chronicles the lives of seven women at midlife and the looming events that will force them to rethink their futures alone and together. A mesmerizing meditation on the vicissitudes of aging, the transformative power of art, and a stirring paean to female friendships, Lydia’s Party will resonate long after the final page.

Margaret Hawkins is the author of two previous novels and a memoir. She wrote for the Chicago Sun-Times and is a Senior Lecturer at the School of the Art Institute of Chicago. She lives in Chicago.

“Captivating . . . There is much to enjoy in Hawkins’s incisive observations . . . You’ll like these women, . . . [and] the story keeps you reading as it examines the gap between how we think we build our destinies . . . and how we actually build them.”

“A tender and clear-eyed look at the tangles in women’s lives.”

“With shades of Mrs. Dalloway, much of the novel takes place in a day, as Lydia prepares for her annual winter party. . . . Hawkins’s novel is beautiful . . . and the plot takes a number of unexpected, hugely enjoyable turns. It is this kind of book: the kind one buys extra copies of to pass out to friends.”

“This book feels like what lifelong friendships really are.”

—Minneapolis Star Tribune (Also Picked as “A Fave of the Moment”)

Early in the novel, Lydia reflects upon her parents’ journey into old age, and “here was the ridiculous and shameful part she hated to admit: she’d thought they’d brought it on themselves. . . . Sometimes she even thought they were that way by choice” (p. 7). Is Lydia being too hard on herself? Is it possible for young, healthy people to grasp the realities of aging?

How has your own list of fears changed over the years? What is the one fear you would most like to confront?

What does Lydia’s orange pot represent? Why does it wind up in Norris’s portrait of Ted?

Lydia and Spence used to have dinner parties with three other couples, but after they divorced, her friendships with the other women dissolved. If you are in a long-term relationship, compare the friendships you’ve made as a single person versus those you’ve made as part of a couple.

Did Roy just use Maura or did he really love her? What does Elaine’s harsh criticism of their relationship-even after Roy’s death-say about her?

Jayne occasionally smokes cigarettes even though her husband, Douglas, disapproves, and Celia and Peter both cheat on their tight budget and hide their splurges from each other. Are secrets like these normal and harmless, or are they evidence of a marriage’s deeper problems?

Compare Maura’s relationship with Roy with Celia’s experiences with marriage and motherhood. Who would you say finds greater happiness?

Ted, Spence, and Peter hover around the margins of the party, helping but without being invited inside. In your experience, are men jealous of female friendships? Do women generally feel constrained by the presence of men and children?

Why are dogs and other pets such a large part of Lydia’s story?

How-if at all-does your opinion of Norris change over the course of the novel? Does her creative genius excuse her behavior?

Each of the women is transformed by Lydia’s announcement. How do Norris’s portraits help them to heal?

Has reading Lydia’s Party inspired you to make changes in your own life?