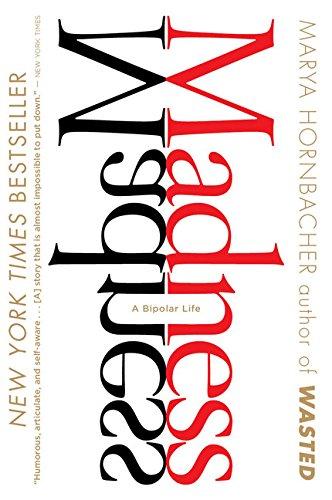 An astonishing dispatch from inside the belly of bipolar disorder, reflecting major new insights

When Marya Hornbacher published her first book, Wasted: A Memoir of Anorexia and Bulimia, she did not yet have the piece of shattering knowledge that would finally make sense of the chaos of her life. At age twenty-four, Hornbacher was diagnosed with Type I rapid-cycle bipolar, the most severe form of bipolar disorder.

In Madness, in her trademark wry and utterly self-revealing voice, Hornbacher tells her new story. Through scenes of astonishing visceral and emotional power,

An astonishing dispatch from inside the belly of bipolar disorder, reflecting major new insights

When Marya Hornbacher published her first book, Wasted: A Memoir of Anorexia and Bulimia, she did not yet have the piece of shattering knowledge that would finally make sense of the chaos of her life. At age twenty-four, Hornbacher was diagnosed with Type I rapid-cycle bipolar, the most severe form of bipolar disorder.

In Madness, in her trademark wry and utterly self-revealing voice, Hornbacher tells her new story. Through scenes of astonishing visceral and emotional power, she takes us inside her own desperate attempts to counteract violently careening mood swings by self-starvation, substance abuse, numbing sex, and self-mutilation. How Hornbacher fights her way up from a madness that all but destroys her, and what it is like to live in a difficult and sometimes beautiful life and marriage — where bipolar always beckons — is at the center of this brave and heart-stopping memoir.

Madness delivers the revelation that Hornbacher is not alone: millions of people in America today are struggling with a variety of disorders that may disguise their bipolar disease. And Hornbacher’s fiercely self-aware portrait of her own bipolar as early as age four will powerfully change, too, the current debate on whether bipolar in children actually exists.

Ten years after Kay Redfield Jamison’s An Unquiet Mind, this storm of a memoir will revolutionize our understanding of bipolar disorder.

Marya Hornbacher is the author of the Pulitzer Prize-nominated national bestseller Wasted: A Memoir of Anorexia and Bulimia, a book that remains an intensely read classic, and the acclaimed novel The Center of Winter. An award-winning journalist, she lectures nationally on writing and mental health and lives in Minneapolis, Minnesota.

Early in Madness, Hornbacher discloses the nature of her bond with her bipolar disorder. “I grew into it. It grew into me. It and I blurred at the edges, became one amorphous, seeping, crawling thing.” How much does Hornbacher’s self-image, or her very identity for that matter, revolve around her “madness”? As the memoir progresses, does Hornbacher eventually succeed in forging an identity separate from the effects the disorder? Can you describe Hornbacher’s personality, her tone as a narrator, and even her actions in a way that is devoid of the traits and the descriptive terms of bipolar? Can the two be separated?

“Crazy is nothing out of the ordinary in my family. It’s what we are, part of the family identity, sort of a running joke.” How do you think this collective attitude of Hornbacher’s family contributed to her development, particularly in childhood? Do you think she might have had a diagnosis sooner (or later) in another family? Do you think her family history ultimately helped her find a kind of acceptance and support early in life that she wouldn’t have had in other circumstances? Do you think her parents have any responsibility for the course Hornbacher’s early life took, or were they fairly helpless in the wake of their child’s early onset bipolar disorder? What is Hornbacher’s attitude toward her parents? Does her attitude change throughout Madness?

Knowing from the outset that she has a bipolar diagnosis, do you respond differently to the accounts of Hornbacher’s destructive behavior–the cutting, the eating disorders, the drinking, the drugs, the promiscuity? Do you view actions that in other circumstances might end up labeled as extreme teenage rebellion differently than you would if someone without a mental health diagnosis was leading the life Hornbacher described? Are you more sympathetic or more skeptical? Do you think a lot of people would see Hornbacher in this period of her life as her first psychiatrist did, just as “a very angry little girl”?

Throughout Madness, Hornbacher describes several instances in which she resorted to manipulation and deceit. This pattern of behavior begins with the eating disorder: “As tempting as this health thing is, the idea of going back to my familiar obsessions is more so. I want out. I want my bones and my books back. I become the star patient.” Time after time, Hornbacher gets people to think she is well enough to be on her own, making her own decisions. Do you see this in some sense as a failure of the system, or is it more of a marker of Hornbacher’s intelligence and ability—or simply as the nature of addiction? In what other instances does she take control in ways that turn out to be harmful? What are other reoccurring patterns and cycles of behavior in Madness?

When Hornbacher reconnects with Julian, she acknowledges emotionally overpowering him: “He has no life–now he can have mine.” And with Jeremy, she perceives that “he likes the fact that I’m crazier than hell.” Her “insane passion” can be attractive and alluring and goes hand in hand with the excitement of her extravagance and impetuosity–it draws men in, and then pushes them away. Do you think there is a certain type of person who is more attracted to the kind of relationship Hornbacher could offer? Do you see connections between the potential appeal of such a passionate, all-consuming relationship and certain assumptions about love and romance in society? Along with the intensity and tumultuousness, Hornbacher is ultimately very vulnerable despite all her bravado; do you think this also could be part of her appeal to men? To us as a narrator?

Hornbacher describes her relationship with Jeremy as “a love affair, with all the drama and Sturm und Drang the phrase implies,” and she writes, “I have become inseparable from the way I feel about him. And maybe it really is love. Love’s a kind of madness, isn’t it?” Do you agree–is love a kind of madness? Have you ever experienced the kind of exhilaration Hornbacher describes during the early days of their relationship? Have you ever felt maybe a little crazy falling head-over-heels in love with someone and experienced on some level the loss of control Hornbacher is constantly, and often destructively, striving to counteract? Have you ever made bad decisions because of these feelings?

“I sometimes feel like I’ve raced off a cliff like Wile E. Coyote and am spinning my legs in midair. But I’m fine. It’s fine. It’s all going to be fine. Crazy people don’t have dinner parties, do they?” Hornbacher expends huge amounts of energy denying her illness and striving for what she perceives as the trappings of a sane, normal life–husband, house, job, monogrammed stationary. For much of the memoir Hornbacher either emphatically denies that she is crazy because she isn’t homeless, muttering to herself, and pushing a shopping cart down the street, or on the flip side, worries that she will end up that way–a stereotypical crazy person. What would you consider overtly crazy behavior? Sane behavior? How much are your perceptions based on your own experiences of societal norms? How much of what you consider “crazy” comes from what you are familiar with in movies, books, and popular culture?

Hornbacher’s intense grappling with the meaning and consequences of having bipolar disorder reveals her thoughts about the nature of diagnosis. “Now,” she writes, “it has a name, and if it has a name, it’s a real thing, not merely my imagination gone wild” but then “the horror sets in. All that time I wasn’t crazy; I was, in fact, crazy. It’s hopeless. I’m hopeless.” It what ways does having her illness confirmed make it worse? It what ways does it make it better? How does receiving a diagnosis of mental illness feel different from being diagnosed with other illnesses? Naming her illness gives Hornbacher relief, but it also has tremendous power. Do you think the power of the diagnosis contributes to Hornbacher’s initial, destructive denial?

Hornbacher often personifies her illness, sometimes to the extent that it seems like another relationship in her life. At one point, she writes about the disease as if it were the dominant partner in an abusive relationship. “Madness will push you anywhere that it wants. It never tells you where you’re going or why. It tells you it doesn’t matter. It persuades you.” And at other times, her madness appears as an unwanted houseguest settling in for a long, inauspicious stay. To what degree do you think Hornbacher sees her illness as separate from herself? Is this at odds with what she writes about the blurring of the line between her self and the madness? Do you think it is useful to look at her relationship with bipolar as another relationship in her life, one that has perhaps lasted the longest?

After finally getting a diagnosis, Hornbacher writes, “I never use the word bipolar outside of Dr. Lentz’s office or the confines of my parents’ homes. I’m not eager to mention a ‘mental illness,’ either.” Hornbacher identifies some mental illnesses–schizophrenia, in addition to her disease, bipolar disorder–as seeming less socially acceptable than depression, and indeed this perception is borne out strongly in studies of public perceptions of mental illnesses. Do you agree? As Hornbacher accepts her own diagnosis, do you think she is also trying to change public preconceptions about mental disorders? And if so, does she succeed?

When Hornbacher’s marriage to Jeff becomes strained and they temporarily separate, Hornbacher explains Jeff’s role in the relationship during her hospitalizations: “You become the hero, the center of someone else’s existence. You are the saint. You have, in this sense, a great deal of power.” Do you think this power dynamic is particular to mental illness, or do you think this is part of loving someone who is struggling with illness of any kind? What do you think are the challenges mental illness poses to a relationship, particularly a marriage? Why and how do you think Jeff and Marya’s relationship has lasted?

Hornbacher asks, “How do we know who we are or what we can become?” and then goes on to write “We tell ourselves stories. The stories we tell are how we know ourselves. We are a creation, a product of our own minds.” What does the story Hornbacher tells in Madness say about her? Do you think it is a hopeful story? If so, why? Does her story at all serve as a cautionary tale? If so, how? Do you agree that we are a creation of our own minds?

At the end of Madness, Hornbacher reveals that she ultimately finds value in the places bipolar disorder has taken her and that she “wouldn’t exchange the life of my mind for the life of another.” The disease is part of who she is and has a large role in shaping the person she has become. Do you think that other people with mental illness would agree? How do you think doctors and mental health professionals would react to Hornbacher’s statement? Do you think they would take a similar stance? How do you understand her movement from non-acceptance to acceptance?