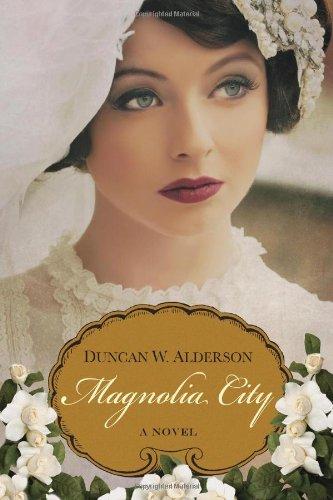 Houston in the 1920s is a city of established cotton kings and newly rich oil barons, where the elite live in beaux art mansions behind the gates of Courtlandt Place. Kirby Augustus Allen, grandson of the Allen brothers who founded Houston as a real estate deal, is grooming his daughter Hetty to marry Lamar Rusk, scion of the Splendora oil fortune. Instead, at the No-Tsu-Oh Carnival of 1928, beautiful, rebellious Hetty encounters a mysterious man from Montana dressed in the gear of a wildcatter–an outsider named Garret MacBride.

Hetty is torn between Lamar's lavish courtship and her instinctive connection to Garret.

Houston in the 1920s is a city of established cotton kings and newly rich oil barons, where the elite live in beaux art mansions behind the gates of Courtlandt Place. Kirby Augustus Allen, grandson of the Allen brothers who founded Houston as a real estate deal, is grooming his daughter Hetty to marry Lamar Rusk, scion of the Splendora oil fortune. Instead, at the No-Tsu-Oh Carnival of 1928, beautiful, rebellious Hetty encounters a mysterious man from Montana dressed in the gear of a wildcatter–an outsider named Garret MacBride.

Hetty is torn between Lamar's lavish courtship and her instinctive connection to Garret. As Lamar's wife she would be guaranteed acceptance to the highest ranks of Houston society. Yet Garret, poor but powerfully ambitious, offers the adventure she craves, with rendezvous in illicit jazz clubs and reckless nights of passion. The men's intense rivalry extends to business, as rumors of a vast, untapped ocean of oil in East Texas spark a frenzy that can make fortunes–or shatter lives and dreams beyond repair.

A sweeping, sumptuous debut that evokes the turmoil and drama rippling through the history of the Lone Star State, Magnolia City is a story of love, greed, jealousy, and redemption, brought to life through the eyes of its unforgettable heroine.

Duncan W. Alderson was born in Oil Town, USA, where he began his career writing advertising copy. He then escaped Texas to become an expat in England. After teaching for twelve years at the Toronto Waldorf School, Duncan founded the Rabbit Hill Writers’ Studio in Lancaster County, Pennsylvania. Inspired by photos of his mother as a flapper in El Paso, Texas, he spent ten years researching and developing Magnolia City.

“Masterfully written, this story of oil, love, and family will grab you by the heart and not let you go.”—Maria V. Snyder, New York Times best-selling author

“Magnolia City is a compelling and evocative portrait of Houston in the 1920s. In turns thrilling, heartbreaking and uplifting, you will not want to put this book down until you've seen Hetty MacBride through all of her trials and triumphs.”—Rebecca Kanner, author of Sinners and the Sea

“Duncan Alderson deftly brings to life a lost and fascinating time and place, Texas in the early years of the twentieth century. Magnolia City is a page-turner from the start.”—Holly Chamberlin, author of The Beach Quilt

Hetty dates two charismatic men, Lamar and Garret. She has trouble choosing between them and, even up to the last moment, isn’t sure she’s made the right decision. She feels that the human heart, after all, has four chambers. Do you think a woman can love more than one man? Does Hetty make a good decision . . . or a foolish one?

Is Hetty’s impulse to work at the Dowling Street Medical Clinic a pure one, or simply rebellion against her parents? She likes shocking her contemporaries by riding in the front seat with Pick and consorting with his family. Is this true philanthropy on her part? If she really cares about Pick, would she ask him to pump hot oil under cover of night? Houstonians are famous for their generosity, but is there such a thing as pure philanthropy—or is there usually a hidden agenda?

Why does Nella keep her heritage a secret? Why does Hetty insist on taking Garret into her mother’s secret room? Why does she expect him to reject her when he sees what’s on the walls? What does this reveal to us about society in Houston in the 1920s? Have things changed much since then?

Why does Hetty have precognitive dreams? What part do they play in the unfolding of the story and what do they tell us about her heritage? How does she use the knowledge that’s revealed to her? Do you think dreams are caused by indigestion or are they a conduit to a deeper part of ourselves? What responsibility do we have in interpreting them?

Many sisters feel affection for each other. Why don’t Hetty and Charlotte get along? What does their relationship reveal about family dynamics in the Allen household? Why is Charlotte compared to a Stegodyphus spider? Do you have a harmonious relationship with your own relatives today? Or do you still feel “trickles of irritation” like Hetty?

Does Hetty cross a line when she starts helping her husband break the law? Do you think she’s justified in what she does, or is Pearl correct when she says “the wages of sin is death”? We have similar laws today forbidding recreational drugs like marijuana. Do you think drugs should be legalized or not? What lessons can be learned from Prohibition?

At one point, Nella quotes the Hopis: “When you dig treasure out of the earth, you invite disaster.” What disaster does Hetty witness in the Splendora oil field? How is this environmental blight a metaphor for her relationship with Lamar? And what do more recent spills tell us about the dangers and ethics of the oil industry?

Do you think Nella should have stayed at the Kneeling Station for three days? Why didn’t she recant her story of the Alamo sooner? What was at stake for her? Do you think we should teach our children both sides of the conflict? It’s been said that “History is written by the victors.” Do we need to rewrite Texas history for a new generation that includes a larger Hispanic populace?

Why does Hetty kneel before the Virgin of Guadalupe in the Chapel of Miracles? Wouldn’t a modern young woman like her view the Madonna as Catholic superstition? How does this relate to her heritage and her relationship with Nella? Is it sacrilege for Cora to compare the sacred image to a vulva? Does this help or hinder Hetty’s growing sense of womanhood? Do you think America needs a goddess of its own?

Why does Cora insist that Hetty confront Pick’s mother, Velma? Can you deal with guilt alone, or do you need forgiveness in order to loosen its hold? Is Hetty responsible for what happens to Pick? Can she forgive herself or, like the Ancient Mariner, does she have to continuously retell her story, first to Cora, then to Garret, in order to break its hold over her?