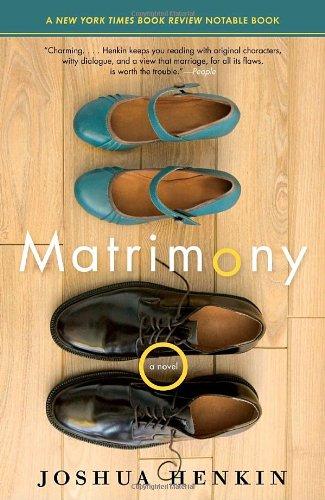 It’s 1987, and Julian Wainwright, aspiring writer and waspy son of New York City old money, meets beautiful, Jewish Mia Mendelsohn in the laundry room at Graymont College. So begins a relationship that spans twenty years, as it takes Julian and Mia across the country and through the depths of family tragedy, love and friendship, money and ambition, desire and tensions of faith.

It’s 1987, and Julian Wainwright, aspiring writer and waspy son of New York City old money, meets beautiful, Jewish Mia Mendelsohn in the laundry room at Graymont College. So begins a relationship that spans twenty years, as it takes Julian and Mia across the country and through the depths of family tragedy, love and friendship, money and ambition, desire and tensions of faith.

Joshua Henkin is the author of Swimming Across the Hudson, which was selected by the Los Angeles Times as a Notable Book for the Year; his short stories, essays, and reviews have appeared in many journals and newspapers. He teaches at Sarah Lawrence College, Brooklyn College, and the 92nd St. Y in New York City.

Read A Conversation with Joshua Henkin

“Beguiling….[Henkin writes] effortless scenes that float between past and present….[He creates] an almost personal nostalgia for these characters.” —Jennifer Egan, The New York Times Book Review

“Elicits a passionate investment in the fate of its characters — truly an up-all-night read.”
—The Washington Post

“Henkin writes with a winningly anachronistic absence of showiness. . . . A lifelike, likable book populated by three-dimensional characters who make themselves very much at home on the page.” —Janet Maslin, The New York Times

“Charming. . . . Henkin keeps you reading with original characters, witty dialogue and a view that marriage, for all its flaws, is worth the trouble.” —People

Discuss the parent-child relationships in the novel. How much are the lives of Julian, Mia, and Carter a rejection of their parents’ lives? Despite how much they try to get away from the patterns of their parents, are they successful? Also consider Professor Chesterfield as a replacement father figure for Julian. What role does genetics play in the parent-child relationships?

In a book about a writer, what effect does the autobiographical component have on the story? Julian’s desire to be a writer is a catalyst that drives the narrative. What does the novel say about the writer’s life?

As Julian tried to comfort Mia when her mother was sick, Mia “felt her heart beat against him like something caged in, wings batting, slapping against themselves.” What does this say about their relationship, and how is it reflected in their marriage?

Discuss the marriage of Julian and Mia. How do they complement each other (or not)?

How much is Julian’s life ruled by the following idea: “Julian already felt, moments after graduating from college, that he was letting people down”? Consider which of Julian’s decisions are either passive or made in order to please others.

Consider the following two quotations about Mia: “She felt suddenly that they weren’t her friends, that despite all the time they’d spent together, they’d never really cared about her.” “She felt desperate for him to know her better, felt a conviction that despite having been with her for three years, he didn’t apprehend her at all”. Are Mia’s fears rational, or justified?

Mia and Julian were prompted to get married because of her mom’s cancer, and then Mia’s own cancer scare seems to push them into the decision to have children. Is this a good way to run a marriage? What is Henkin telling us about adult decisions and consequences?

Examine the trajectory of Carter and Pilar’s relationship. What does it say about them?

The novel is structured around place. What is the significance of the college town? How do the different locales affect the couples?

How does the stress of choosing schooling and careers affect these couples?

Issues of money come up between both of the couples. What does the novel tell us about the role of money in marriages and in society? What role does class play in the characters’ relationships and careers?

At the end of the novel, Julian forgives Carter. Do you agree with his decision?

Compare and contrast all of the couples in the novel (married and not). In total, what does the novel tell us about matrimony?

Novels about relationships are usually the terrain of women, but Matrimony is written by a man. How much does the gender of the author influence the narrative?

Mia is Jewish but only seems to grasp at it during crucial times. What is the role or importance of religion with these couples?

How does divorce play into the novel? Do you think it’s traumatic for children no matter what age they are?

Discuss the infidelities in the novel. What role does betrayal play with these characters and in their marriages/relationships?