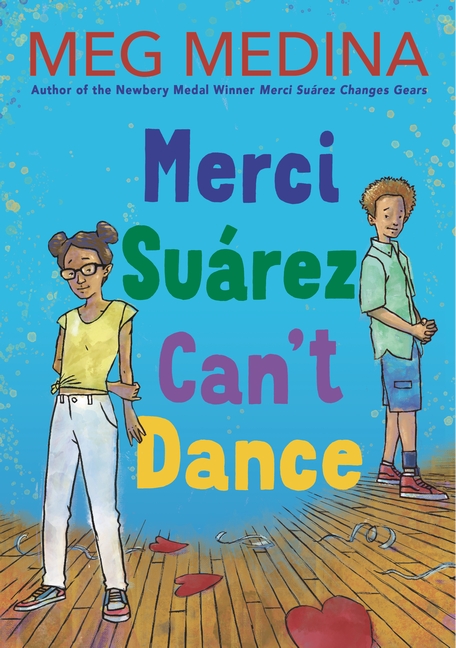 Seventh grade is going to be a real trial for Merci Suárez. For science she’s got no-nonsense Mr. Ellis, who expects her to be a smart as her brother, Roli. She’s been assigned to co-manage the tiny school store with Wilson Bellevue, a boy she barely knows, but whom she might actually like. And she’s tangling again with classmate Edna Santos, who is bossier and more obnoxious than ever now that she is in charge of the annual Heart Ball.

One thing is for sure, though: Merci Suárez can’t dance—not at the Heart Ball or anywhere else. Dancing makes her almost as queasy as love does,

Seventh grade is going to be a real trial for Merci Suárez. For science she’s got no-nonsense Mr. Ellis, who expects her to be a smart as her brother, Roli. She’s been assigned to co-manage the tiny school store with Wilson Bellevue, a boy she barely knows, but whom she might actually like. And she’s tangling again with classmate Edna Santos, who is bossier and more obnoxious than ever now that she is in charge of the annual Heart Ball.

One thing is for sure, though: Merci Suárez can’t dance—not at the Heart Ball or anywhere else. Dancing makes her almost as queasy as love does, especially now that Tía Inés, her merengue-teaching aunt, has a new man in her life. Unfortunately, Merci can’t seem to avoid love or dance for very long. She used to talk about everything with her grandfather, Lolo, but with his Alzheimer’s getting worse each day, whom can she trust to help her make sense of all the new things happening in her life? The Suárez family is back in a touching, funny story about growing up and discovering love’s many forms, including how we learn to love and believe in ourselves.

In Meg Medina’s follow-up to her Newbery Medal–winning novel, Merci takes on seventh grade, with all its travails of friendship, family, love—and finding your rhythm.

Meg Medina is the 2019 Newbery Medalist for Merci Suárez Changes Gears. About this sequel, she says, “I’m so excited to bring my readers into the world of the Suárez family and Seaward Pines once again. . . . New friends, new teachers, and new self-doubts. It’s been a thrill to write about all the zany things that the seventh grade can throw at a person.” The recipient of the Pura Belpré Author Award for her young adult novel Yaqui Delgado Wants to Kick Your Ass, Meg Medina is also the author of the novels Burn Baby Burn and The Girl Who Could Silence the Wind and the picture books Mango, Abuela, and Me and Tía Isa Wants a Car, for which she received an Ezra Jack Keats New Writer Award. Meg Medina lives in Richmond, Virginia, with her family.

“Now in seventh grade, Merci Suárez finds that a new school year means new responsibilities and challenges. . .The struggles with friendships, responsibility, school, crushes, and jealousy that Merci and her friends face will strike a chord with many readers. . .The plot moves along at a consistent and page-turning pace, and as usual Medina’s characters are excellently written and developed. Medina also touches on racism and how shared cultural heritage can bring people together unexpectedly. . . Fans of Merci Suárez Changes Gears will love watching how Merci and those around her grow. This sequel doesn’t disappoint and is an essential purchase for all collections.” —School Library Journal

“Merci continues to be a vivid and dimensional character, strong-minded and capable but also believably twelve (her mother asks the inevitable question “What’s wrong with you these days?”) and credibly nervous about moving out of her comfort zone. . . . The book is dedicated to ‘Merci fans who wanted to know what happened next,’ and hopefully there are more volumes of ‘next’ to come for sparky Merci.” —Bulletin of the Center for Children’s Books

“Newbery Medalist Medina artfully chronicles another year of highs and lows in the life of Cuban American middle schooler Merci Suárez via this winning sequel to Merci Suárez Changes Gears. . . Medina continues to build on the stellar character work of the first book, balancing laugh-out-loud one-liners (‘Buy a Heart Ball ticket if you have absolutely nothing better to do in this sad life’) with vulnerability. . . This is a sequel of the finest quality, perfectly capturing the feelings of awkward first crushes (‘Did he say I look nice? Or did he say I look like a rodent? I can’t decide’) and evolving friendships.”—Publishers Weekly (starred review)

“In this sequel to the Newbery-winning Merci Suárez Changes Gears (2018), 12-year-old Merci takes on growing responsibilities both within her family and as a seventh-grader…Filled with the familiar, laugh-out-loud humor from the first title, this sequel will quickly pull readers, both returning and new, into Merci’s world… Fans of Merci will root for her as they are immersed in her vibrant world full of unique characters and heartfelt surprises.” —Booklist (starred review)

“Merci returns for another year of challenges and triumphs at home and at Seaward Pines Academy…Merci’s maturity and growth are as engaging and compelling as they were in the author’s Newbery Medal winner, Merci Suárez Changes Gears (2018). The cast is broadly diverse; Merci and her family are Cuban American, Edna is Dominican, and Creole and Cajun Wilson has a physical disability. An uplifting sequel told with heart and humor.” —Kirkus Reviews (starred review)

1. Now that Merci is in seventh grade, are the boys acting differently than they did last year? Why is Merci not crazy about the idea of working with a boy in the school store? How does Wilson Bellevue turn out to be unlike the other boys?

2. When Merci finds out that she and Wilson have to sell tickets to the school Valentine’s Day dance, her heart sinks. She says, “Dancing is just not my jam” (page 14). Why else does she say she can’t stand the Heart Ball? Do you think there are other reasons she might not want to go?

3. This is Merci’s first year on the school soccer team, and Papi doesn’t like to miss any of her games, even though the team isn’t very good. Merci wonders if she should quit and just play with Papi’s team, but Papi won’t let her quit—he says the Suárezes don’t stop trying when things are bad. Where else in life do Merci and her family members apply this idea?

4. It’s been a year since Merci found out that her grandfather Lolo has Alzheimer’s. On his good days, Merci plays dominos and other games with him, though it’s not as fun as it used to be. Other times, Lolo thinks he sees things and becomes scared, and Merci feels afraid, too—of Lolo. Have you ever felt like someone you know isn’t acting like themselves? What do you think it’s like for Merci to continue spending time with Lolo even when she doesn’t know how he will be from day to day?

5. When Tía Inés has to work late and tells the family to eat without her, Mami still holds dinner until Tía gets home. And when Lolo says to start eating and not wait for him to get to the table with his walker, everyone sits quietly until he is seated, including the rowdy twins. Why do the Suárezes have this tradition? What does it say about them as a family?

6. This year, Lena and Hannah are helping Merci with her “Edna skills” to try to keep her from arguing with her former nemesis, Edna Santos. Merci and Edna were supposed to have a truce, but Edna’s attitude and insults still drive Merci crazy. Do you think Merci is right to be hurt that her friends seem to like Edna? How does Merci contribute to the problems between her and Edna? Have you ever had to mediate between two people who aren’t getting along?

7. After a long day at work, Tía forgets to give Merci the money for Axel’s tooth, so Merci uses her own money, which she was saving to spend on a bobblehead at school. “But that’s how it is,” she says. “There’s no use complaining to anyone around here about it. ‘Be satisfied with what you have, which is plenty,’ Abuela always says” (page 75). What do you think Abuela means by this? Why do you think Merci decides to use her own money for Axel’s tooth?

8. When Tía takes a day off from work even though she’s not sick, Mami points out that people can feel “sick in spirit” sometimes and asks Merci if that ever happens to her. Merci wants to respond “every day,” but she only shrugs because, she says, Mami is “prying” (page 93). What does it mean to feel “sick in spirit”? Why do you think Merci doesn’t want to share her feelings with Mami?

9. When Merci goes to the secondhand store to sell her outgrown clothes, Tía encourages her to pick out an outfit for herself, but Merci is reluctant. Her rich classmates have “made it cool to wear ugly plaid pants that belonged to somebody’s grandpa” (page 102), but Merci thinks that wearing secondhand clothes wouldn’t be considered such a cool look in her case. Why is that? Do you think she’s right?

10. Merci comes across as pretty confident, but throughout the story she struggles with feelings of jealousy—about her friend Hannah helping Edna with the Heart Ball instead of hanging out with her, about Tía spending time with Simón, even about the twins playing a silly monster game with Papi. Why do you think these feelings come up? What would make her feel better?

11. Kissing is on Merci’s mind a lot these days—she both wonders what it’s like and feels repelled at the thought of someone doing it. Mami once told Merci that one day, when she’s grown, romantic love will no longer seem terrible at all. “Now I’m finding out that ‘one day’ doesn’t arrive all at once,” says Merci. “It creeps up on you a little bit at a time, like a skilled assassin” (page 132). In what ways are Merci’s mixed feelings about things like kissing becoming more apparent? Why do you think they are changing?

12. When the photo equipment breaks after the dance, Merci stuffs it back in the case in “a blind panic” with Wilson watching (pages 178–179). Then she hides at home, abandoning Hannah and avoiding Edna’s wrath. What do you think of the way Merci handled this situation? What do you think Wilson thinks about what she did? What would you have done if you were Merci, and why?

13. When Merci finally faces the music about the Heart Ball incident, Miss McDaniels says she is shocked and saddened because Merci is one of the school’s most responsible and honest students. “I’m sick of being responsible,” Merci wants to yell. “Sometimes it’s too hard” (pages 223–224). What has been happening in Merci’s life to make her feel this way? Have you ever felt like things were “too hard” in your life or that you had too many responsibilities?

14. After Merci consoles Edna in the bathroom, Edna asks Merci in Spanish about merengue dancing at Tía’s school. Merci is shocked, because they never speak Spanish together, even though it’s one thing they have in common. Why do you think Edna decides to speak to Merci in Spanish and stand up to Jason Aldrich when he puts on a fake accent? How do you think Merci and Edna felt when Jason was talking that way? Why does Miss McDaniels decide to showcase the Suárez School of Latin Dance at the One World celebration?

15. The title of the book declares that Merci Suárez can’t dance. Yet at the end, Merci is onstage in full costume, dancing—and enjoying it. What happened to change Merci’s feelings about dancing? Have you ever changed your mind about something or done something you were afraid to do?