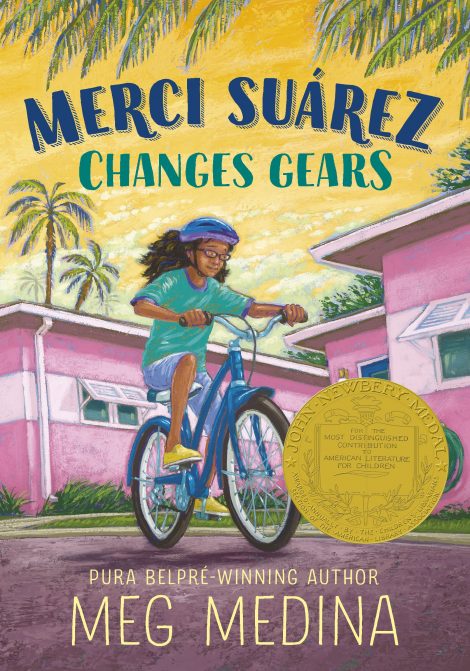 Thoughtful, strong-willed sixth-grader Merci Suárez navigates difficult changes with friends, family, and everyone in between in a resonant new novel from Meg Medina.

Merci Suárez knew that sixth grade would be different, but she had no idea just how different. For starters, Merci has never been like the other kids at her private school in Florida, because she and her older brother, Roli, are scholarship students. They don’t have a big house or a fancy boat, and they have to do extra community service to make up for their free tuition. So when bossy Edna Santos sets her sights on the new boy who happens to be Merci’s school-assigned Sunshine Buddy,

Thoughtful, strong-willed sixth-grader Merci Suárez navigates difficult changes with friends, family, and everyone in between in a resonant new novel from Meg Medina.

Merci Suárez knew that sixth grade would be different, but she had no idea just how different. For starters, Merci has never been like the other kids at her private school in Florida, because she and her older brother, Roli, are scholarship students. They don’t have a big house or a fancy boat, and they have to do extra community service to make up for their free tuition. So when bossy Edna Santos sets her sights on the new boy who happens to be Merci’s school-assigned Sunshine Buddy, Merci becomes the target of Edna’s jealousy.

Things aren’t going well at home, either: Merci’s grandfather and most trusted ally, Lolo, has been acting strangely lately — forgetting important things, falling from his bike, and getting angry over nothing. No one in her family will tell Merci what’s going on, so she’s left to her own worries, while also feeling all on her own at school. In a coming-of-age tale full of humor and wisdom, award-winning author Meg Medina gets to the heart of the confusion and constant change that defines middle school — and the steadfast connection that defines family. 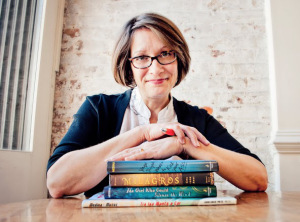 Meg Medina is the author of the YA novels Burn Baby Burn; Yaqui Delgado Wants to Kick Your Ass, winner of the Pura Belpré Author Award; and The Girl Who Could Silence the Wind. She also wrote the picture books Mango, Abuela, and Me, a Pura Belpré Illustrator Award Honor Book, and Tía Isa Wants a Car, recipient of an Ezra Jack Keats New Writer Award. She lives in Richmond, Virginia.

“Merci Suárez has my heart.” — Rebecca Stead, Newbery Award–winning author of When You Reach Me

“The realistic portrayal of a complex young Latina’s life is one many readers will relate to as she discovers that change can be hard, but it’s the ride that matters. Pura Belpré–winning author Medina cruises into readers’ hearts with this luminous middle grade novel.” —School Library Journal (starred review)

“Medina consistently and assuredly portrays Latinx girls and women who grapple with their insecurities while learning about themselves and their worlds, and middle-grade heroine Merci is a fine example. Accurate and natural use of Spanish words and sayings that fit each character’s tone builds authenticity. Medina writes with sincerity and humor to convey the experience of growing up in a close-knit family that tends to mingle too much in each other’s business while unfailingly and dedicatedly supporting and helping one another.” —The Horn Book (starred review)

“In this warmly told story, Medina (Burn Baby Burn) introduces 11-year-old Merci, descendent of Cuban immigrants, who attends a Florida private school on scholarship with her whip-smart older brother…Medina keeps the tone light as Merci’s take-charge personality helps her to succeed in this coming-of-age tale about family and the perils of sixth grade.” —Publishers Weekly (starred review)

“Caught between the world of family and peers, the comfort of Las Casitas and the enticing new call of independence, Merci Suárez is a delightful heroine who, despite real challenges, never wavers in her strong sense of self or her fierce love for la familia. Readers will appreciate watching her navigate how to hold on to what matters when it feels like everything is changing.” —New York Times Book Review

“Medina’s breathtaking coming-of-age story features a strong, deeply honest protagonist whose insights will make readers laugh, as well as dynamic secondary characters that reveal glimmers of profound depth. Medina capably gets to the heart of middle school experiences in this engrossing story of a kid growing into herself. A must read.”—Booklist (starred review)

“Medina writes about the joys of multigenerational home life (a staple of the Latinx community) with a touching, humorous authenticity. Merci’s relationship with Lolo is heartbreakingly beautiful and will particularly strike readers who can relate to the close, chaotic, and complicated bonds of live-in grandparents. Medina delivers another stellar and deeply moving story.”—Kirkus Reviews (starred review)

“Medina writes with profound respect for her readers, not holding back on showing the circumstances that can make growing up an adventure of ups and downs. . . . Layered with humor, Merci Suárez Changes Gears is a heartwarming story about a smart, talented, and thoughtful girl who refuses to let all that’s changing keep her from holding on to what matters most.”—Renée Watson, author of What Momma Left Me

1. We see Merci taking charge almost right away in the book, leading the other girls in her class through the maintenance hallways at school to the gymnasium for picture day. But even when Merci takes the lead in this moment, she still seeks out Edna Santos’s approval. How did Edna end up with so much power?

2. Merci and her brother, Roli, have to do extra community service hours as part of their scholarships to Seaward Pines Academy. Aside from having to be in the Sunshine Buddies Club, what are some of the smaller, less obvious ways that Merci notices a difference between herself and some of the other students?

3. It feels to Merci like there is suddenly a huge divide between the boys and the girls in her class, one that wasn’t there when they were all still in fifth grade. Why does Merci, more than some of the other girls in her class, have a hard time adjusting to this change? How might a student who is trans or gender fluid feel about how often things are separated for boys and girls?

4. Edna Santos is always putting the phrase “no offense” in front of things she says that are not very nice. Have you ever noticed how people try to disguise unkind comments like this? Is it always necessary to share negative comments? When might be a time when sharing a criticism is important? Can you think of more thoughtful alternatives for sharing your thoughts and suggestions with another person?

5. Why does a simple thing like writing an apology to Michael Clark take Merci such a long time to do? What is she worried about?

6. Merci loves snapping photos of the people around her and editing them so that the pictures show what she sees when she looks at a person. What does this tell you about Merci and the way she observes the world?

7. When Edna invites everyone in the class to a party except for Merci, she does it right in front of Merci. What is Edna trying to achieve? Does she succeed in her goal?

8. Over and over in the novel, Merci and the members of her family say the same thing: there are no secrets. It is the family rule. Why does this make it feel even worse when Merci finally learns the truth about Lolo’s disease? Do you think her family was justified in keeping this secret and breaking their own rule? Why?

9. Meg Medina includes a lot of small clues about Lolo’s Alzheimer’s throughout the book. At what point could you tell something was happening with him? Why didn’t Merci want to believe that something serious was going on?

10. When Merci and Lolo talk about his Alzheimer’s disease, she gets angry and knocks their game of dominoes to the ground. Why do you think she reacted that way? Have you ever reacted strongly in an unexpected way?

11. Lolo and Merci are both frightened about what his disease means for their future, but Lolo says, “We are the Suárez family, Merci. We are strong enough to face this together” (page 275). How is going through something difficult with your family different from going through something difficult on your own? How do each of the members of Merci’s family help her in different ways?

12. Why are the other students so happy when Edna gets in trouble for destroying the Anubis mask? Merci can’t quite make sense of it, thinking, “How does it work that the same kids who followed Edna around all the time really seemed to like seeing her in trouble? How can somebody popular have so many people glad to see her crash? Maybe like might be confusing, but popular is even weirder. Turns out, it’s not the same thing as having friends at all”(pages 323–324). Were you surprised by how things turned out between Merci and Edna? What do you think it will be like at school once everyone is back from winter break?

13. Merci ends the novel feeling both happy and sad, knowing how much things will continue to change for her and her family. Change is in the very title of the book. What are the many changes Merci has to deal with throughout the novel, from little changes to big ones? Do you think she herself changes from the way she was at the beginning? Did the book change the way you think about anything?