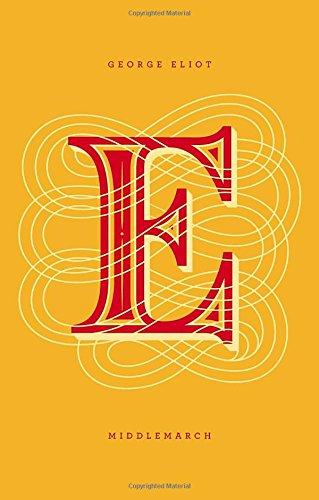 A Study of Provincial Life

Winner of the 2012 Fifty Books/Fifty Covers show, organized by Design Observer in association with AIGA and Designers & Books

It all begins with a letter. Fall in love with Penguin Drop Caps, a new series of twenty-six collectible and gift-worthy hardcover editions, each with a type cover showcasing a gorgeously illustrated letter of the alphabet by superstar type designer Jessica Hische,

Winner of the 2012 Fifty Books/Fifty Covers show, organized by Design Observer in association with AIGA and Designers & Books

It all begins with a letter. Fall in love with Penguin Drop Caps, a new series of twenty-six collectible and gift-worthy hardcover editions, each with a type cover showcasing a gorgeously illustrated letter of the alphabet by superstar type designer Jessica Hische, whose work has appeared everywhere from Tiffany & Co. to Wes Anderson’s film Moonrise Kingdom to Penguin’s own bestsellers Committed and Rules of Civility. A collaboration between Jessica Hische and Penguin Art Director Paul Buckley, the series design encompasses foil-stamped paper-over-board cases in a rainbow-hued spectrum across all twenty-six book spines and a decorative stain on all three paper edges. Penguin Drop Caps debuts with an “A” for Jane Austen’s Pride and Prejudice, a “B” for Charlotte Brontë’s Jane Eyre, and a “C” for Willa Cather’s My Ántonia, and continues with more classics from Penguin.

E is for Eliot. Considered one the masterpieces of realist fiction, George Eliot’s novel, Middlemarch: A Study of Provincial Life, explores a fictional nineteenth-century Midlands town in the midst of modern changes. The proposed Reform Bill promises political change; the building of railroads alters both the physical and cultural landscape; new scientific approaches to medicine incite public division; and scandal lurks behind respectability. The quiet drama of ordinary lives and flawed choices are played out in the complexly portrayed central characters of the novel—the idealistic Dorothea Brooke; the ambitious Dr. Lydgate; the spendthrift Fred Vincy; and the steadfast Mary Garth. The appearance of two outsiders further disrupts the town’s equilibrium—Will Ladislaw, the spirited nephew of Dorothea’s husband, the Rev. Edward Casaubon, and the sinister John Raffles, who threatens to expose the hidden past of one of the town’s elite. Middlemarch displays George Eliot’s clear-eyed yet humane understanding of characters caught up in the mysterious unfolding of self-knowledge.

George Eliot (Mary Ann Evans Cross) was born on November 22, 1819 at Arbury Farm, Warwickshire, England. She received an ordinary education and, upon leaving school at the age of sixteen, embarked on a program of independent study to further her intellectual growth. In 1841 she moved with her father to Coventry, where the influences of “skeptics and rationalists” swayed her from an intense religious devoutness to an eventual break with the church. The death of her father in 1849 left her with a small legacy and the freedom to pursue her literary inclinations. In 1851 she became the assistant editor of the Westminster Review, a position she held for three years. In 1854 came the fated meeting with George Henry Lewes, the gifted editor of The Leader, who was to become her adviser and companion for the next twenty-four years. Her first book, Scenes of a Clerical Life (1858), was followed by Adam Bede (1859), The Mill on the Floss (1860), Silas Marner (1861), and Middlemarch (1872). The death of Lewes, in 1878, left her stricken and lonely. On May 6, 1880, she married John Cross, a friend of long standing, and after a brief illness she died on December 22 of that year, in London.

Jessica Hische is a letterer, illustrator, and self-described “avid internetter”. After graduating with a degree in Graphic and Interactive Design from Tyler School of Art (Temple University) in 2006, she worked for Headcase Design in Philadelphia before taking a position as Senior Designer at Louise Fili Ltd. While working for Louise, she learned most of her skills as a letterer and spent upwards of 16 hours every day working (9 for Louise, 7+ for freelance clients). After two and a half years, Jessica left to further her freelance career and embark on several fun personal projects. Jessica began Daily Drop Cap, a project in which every day she created a new illustrative letter, working through the alphabet a total of twelve times. At its peak, the site had more than 100,000 visitors per month. It culminated with a thirteenth alphabet, each letter crafted by a guest contributor.

“The Penguin Drop Caps series is a great example of the power of design. Why buy these particular classics when there are less expensive, even free editions of Great Expectations? Because they’re beautiful objects. Paul Buckley and Jessica Hische’s fresh approach to the literary classics reduces the design down to typography and color. Each cover is foil-stamped with a cleverly illustrated letterform that reveals an element of the story. Jane Austen’s A (Pride and Prejudice) is formed by opulent peacock feathers and Charlotte Bronte’s B (Jane Eyre) is surrounded by flames. The complete set forms a rainbow spectrum prettier than anything else on your bookshelf.”—Rex Bonomelli, The New York Times

“Classic reads in stunning covers—your book club will be dying.”—Redbook