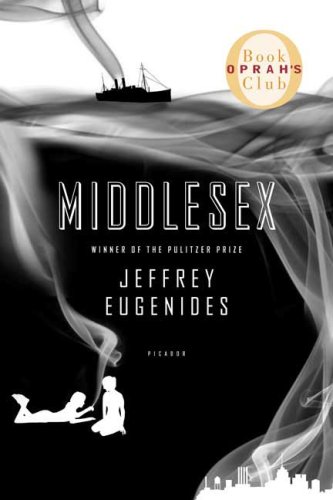 So begins the breathtaking story of Calliope Stephanides and three generations of the Greek-American Stephanides family who travel from a tiny village overlooking Mount Olympus in Asia Minor to Prohibition-era Detroit, witnessing its glory days as the Motor City, and the race riots of l967, before they move out to the tree-lined streets of suburban Grosse Pointe, Michigan. To understand why Calliope is not like other girls, she has to uncover a guilty family secret and the astonishing genetic history that turns Callie into Cal, one of the most audacious and wondrous narrators in contemporary fiction. Lyrical and thrilling, Middlesex is an exhilarating reinvention of the American epic.

So begins the breathtaking story of Calliope Stephanides and three generations of the Greek-American Stephanides family who travel from a tiny village overlooking Mount Olympus in Asia Minor to Prohibition-era Detroit, witnessing its glory days as the Motor City, and the race riots of l967, before they move out to the tree-lined streets of suburban Grosse Pointe, Michigan. To understand why Calliope is not like other girls, she has to uncover a guilty family secret and the astonishing genetic history that turns Callie into Cal, one of the most audacious and wondrous narrators in contemporary fiction. Lyrical and thrilling, Middlesex is an exhilarating reinvention of the American epic.

Jeffrey Eugenides grew up in Grosse Pointe, Michigan, and attended Brown and Stanford Universities. His novel Middlesex was the winner of the Pulitzer Prize and the Ambassador Book Award, and was a finalist for the National Book Critics Circle Award, the IMPAC Dublin Literary Award, France’s Prix Medicis, and the Lambda Literary Award. It was also selected for Oprah’s Book Club. Eugenides’ first novel, The Virgin Suicides, was adapted into a critically-acclaimed film by Sofia Coppola. He is on the faculty of Princeton University, and lives in Princeton, New Jersey.

Winner of the 2003 Pulitzer Prize for Fiction.

“A towering achievement. . . . [Eugenides] has emerged as the great American writer that many of us suspected him of being.”—Los Angeles Times Book Review

“An epic. . . This feast of a novel is thrilling in the scope of its imagination and surprising in its tenderness.”—People

1. Describing his own conception, Cal writes: “The timing of the thing had to be just so in order for me to become the person I am. Delay the act by an hour and you change the gene selection.” (p. 11) Is Cal’s condition a result of chance or fate? Which of these forces governs the world as Cal sees it?

2. Middlesex begins just before Cal’s birth in 1960, then moves backward in time to 1922. Cal is born at the beginning of Book Three, about halfway through the novel. Why did the author choose to structure the story this way? How does this movement backward and forward in time reflect the larger themes of the work?

3. When Tessie and Milton decide to try to influence the sex of their baby, Desdemona disapproves. “God decides what baby is,” she says. “Not you.” (p.13) What happens when characters in the novel challenge fate?

4. “To be honest, the amusement grounds should be closed at this hour, but, for my own purposes, tonight Electric Park is open all night, and the fog suddenly lifts, all so that my grandfather can look out the window and see a roller coaster streaking down the track. A moment of cheap symbolism only, and then I have to bow to the strict rules of realism, which is to say: they can’t see a thing.” (pp. 110-11) Occasionally, Cal interrupts his own narrative, calling attention to himself and the artifice inherent in his story. What purpose do these interruptions serve? Is Cal a reliable narrator?

5. “I’ve never had the right words to describe my life, and now that I’ve entered my story, I need them more than ever,” Cal writes (p. 217). How does Cal narrate the events that take place before his birth? Does his perspective as a narrator change when he is recounting events that take place after he is born?

6. “All I know is this: despite my androgenized brain, there’s an innate feminine circularity in the story I have to tell.” (p.20) What does Cal mean by this? Is his manner of telling his story connected to the question of his gender? How?

7. How are Cal’s early sexual experiences similar to those of an adolescent? How are they different? Are the differences more significant than the similarities?

8. Why does Cal decide to live as a man rather than as a woman?

9. How does Cal’s experience reflect on the “nature vs. nurture” debate about gender identity?

10. Who is Johnny Zizmo? How does he influence the course of events in the novel?

11. What is Dr. Luce’s role in the novel? Would you describe him as a villain?

12. Calliope is the name the classical Greek muse of eloquence and epic poetry. What elements of Greek mythology figure in Cal’s story? Is this novel meant to be a new myth?

14. Middlesex is set against the backdrop of several historical events: the war between Greece and Turkey, the rise of the Nation of Islam, World War II, and the Detroit riots. How does history shape the lives of the characters in the novel?

15. What does America represent for Desdemona? For Milton? For Cal? To what extent do you think these characters’ different visions of America correspond to their status as first-, second-, and third-generation Greek Americans?

16. What role does race play in the novel? How do the Detroit riots of 1967 affect the Stephanides family and Cal, specifically?

17, Describe Middlesex. Does the house have a symbolic function in the novel?

18. “Everything about Middlesex spoke of forgetting and everything about Desdemona made plain the inescapability of remembering,” Cal writes (p.273). How and when do Desdemona’s Old World values conflict with the ethos of America, and, specifically, of Middlesex?

19. The final sentence of the novel reads: “I lost track after a while, happy to be home, weeping for my father, and thinking about what was next.” (p. 529) What is next for Cal? Does the author give us reason to believe that Cal’s relationship with Julie will be successful?

20. “Watching from the cab, Milton came face-to-face with the essence of tragedy, which is something determined before you’re born, something you can’t escape or do anything about, no matter how hard you try.” (p. 426) According to this definition, is Cal’s story a tragedy?