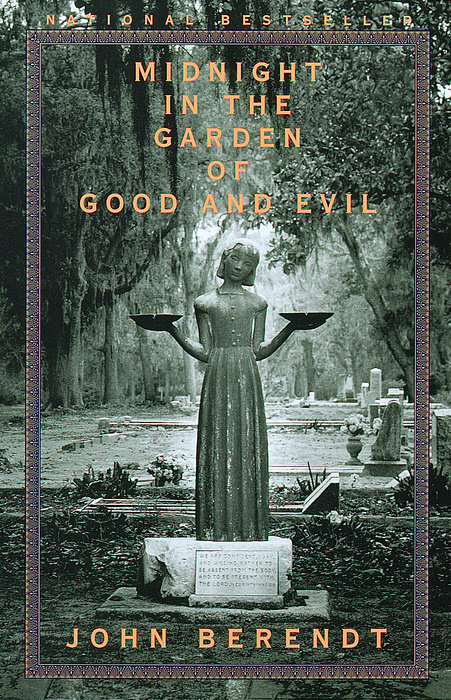 MIDNIGHT IN THE GARDEN OF GOOD AND EVIL

Shots rang out in Savannah’s grandest mansion in the misty,early morning hours of May 2, 1981.  Was it murder or self-defense?  For nearly a decade, the shooting and its aftermath reverberated throughout this hauntingly beautiful city of moss-hung oaks and shaded squares.  John Berendt’s sharply observed, suspenseful, and witty narrative reads like a thoroughly engrossing novel, and yet it is a work of nonfiction.  Berendt skillfully interweaves a hugely entertaining first-person account of life in this isolated remnant of the Old South with the unpredictable twists and turns of a landmark murder case.

It is a spellbinding story peopled by a gallery of remarkable characters: the well-bred society ladies of the Married Woman’s Card Club;

Shots rang out in Savannah’s grandest mansion in the misty,early morning hours of May 2, 1981.  Was it murder or self-defense?  For nearly a decade, the shooting and its aftermath reverberated throughout this hauntingly beautiful city of moss-hung oaks and shaded squares.  John Berendt’s sharply observed, suspenseful, and witty narrative reads like a thoroughly engrossing novel, and yet it is a work of nonfiction.  Berendt skillfully interweaves a hugely entertaining first-person account of life in this isolated remnant of the Old South with the unpredictable twists and turns of a landmark murder case.

It is a spellbinding story peopled by a gallery of remarkable characters: the well-bred society ladies of the Married Woman’s Card Club; the turbulent young redneck gigolo; the hapless recluse who owns a bottle of poison so powerful it could kill every man, woman, and child in Savannah; the aging and profane Southern belle who is the “soul of pampered self-absorption”; the uproariously funny black drag queen; the acerbic and arrogant antiques dealer; the sweet-talking, piano-playing con artist; young blacks dancing the minuet at the black debutante ball; and Minerva, the voodoo priestess who works her magic in the graveyard at midnight.  These and other Savannahians act as a Greek chorus, with Berendt revealing the alliances, hostilities, and intrigues that thrive in a town where everyone knows everyone else.

Midnight in the Garden of Good and Evil is a sublime and seductive reading experience. Brilliantly conceived and masterfully written, this enormously engaging portrait of a most beguiling Southern city has become a modern classic.

John Berendt writes a monthly column for Esquire. He has been the editor of New York magazine and lives in New York.

“Elegant and wicked…. Midnight in the Garden of Good and Evil might be the first true-crime book that makes the reader want to book a bed and breakfast for an extended weekend at the scene of the crime.” —The New York Times Book Review

1. John Berendt describes Savannah as inward-turning, a “semitropical terrarium” (p. 28). What effect does this characteristic have on the life of the city and of its inhabitants? In what ways does Savannah differ from other cities or communities you know?

2. Eccentrics thrive in Berendt’s Savannah. Does this mean that the people of Savannah are unusually tolerant? In what ways are they tolerant, and in what instances do they prove to be intolerant? How tolerant are they when it comes to the crossing of sexual, racial, or class lines?

3. Do you think that people would put up with Joe Odom and his countless misdemeanors in a city with a different character from Savannah? Might he end up in jail if he lived somewhere else?

4. How would you describe Jim Williams’s character? Do you find him amusing? Sinister? How much sympathy do you have for him? Reading the book, did you hope for him to be acquitted? Why, or why not?

5. Some of Jim Williams’ acquaintances think that the Nazi flag episode was insignificant; others do not. “Nazi symbols are not totally bereft of meaning,” says one man. “They still carry a very clear message, even if they’re displayed under the guise of `historic relics’” (p. 178). Do you believe that Williams was being deliberately offensive when he displayed this flag? If so, why?

6. There was a tacit acceptance in Savannah of Jim Williams’s homosexuality before the murder. How would you describe the shift in climate after the murder? Were people really surprised to hear about Williams’s sexual practices? How did they adjust their attitudes?

7. After everything you have heard about Lee Adler, do you go along with the general opinion people have of him in Savannah? Do you think that the reservations so many people hold about him spring from the fact that he is Jewish? Would his actions and behavior be more good-humoredly accepted if he did not happen to be Jewish?

8. Do you think that Danny’s actions and violent scenes indicate that he was following a suicidal course? What were his real feelings towards Jim Williams? What was he trying to get out of him?

9. Is Chablis as frivolous a person as she likes to present herself as being? What does her argument with Burt at the nightclub tell you about her character?

10. Talking about the Oglethorpe Club types, Jim Williams says “When people like that see somebody like me, who’s never joined their silly pecking order and who’s taken great risks and succeeded, they loathe that person. I have felt it many times” (p. 237). Do you think that Williams is correct?

11. Black and white people’s lives “are more intermingled here than in New York,” Berendt has said (USA Today 41594). “I love the banter back and forth among whites and blacks. They don’t mix socially that much, but there’s a civility that’s remarkable” (Washington Post). Do you find that relations between the races in the Savannah that Berendt describes are healthier, or less healthy, than in other parts of America? What might the high black crime rate indicate about the city?

13. At the St. Patrick’s Day parade, the narrator observes that the wagon following the Confederate marchers contained “a blue-clad Union soldier sprawled motionless on the floor of the wagon. It was a chilling tableau, the more so because it was meant to be surreptitious” (p. 257). What does this say about attitudes in Savannah? Does the scene indicate that the passions roused by the Civil War are still alive there? Why did the marchers keep the tableau surreptitious?

14. What do you think the narrator’s attitude is toward the voodoo that is practiced on Williams’s behalf? Does he imply that it is of any value? How would you describe Minerva? Is she the sort of person you would expect to be practicing voodoo?

15. After the trial, Minerva says “I saw it all: The boy fussed at him that night. Mr. Jim got angry and shot him. He lied to me, and he lied to the court” (p. 380). Do you concur with Minerva’s scenario?

16. How would you describe Savannah’s feelings to tradition and to the past? Are these feelings characteristic of the South in general? How do they differ from those in other parts of the country?

17. One reader from Georgia has said of Berendt, “I think he captured what it is to be Southern. He captured the not-talked-about way of life” (USA Today 41594). If this is true, what would you say it is to be Southern? What does the South Berendt describes represent? Does it differ from stereotypes about the South