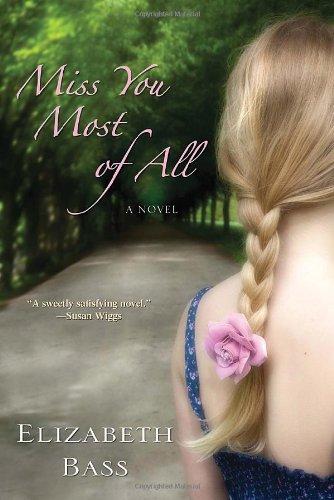 MISS YOU MOST OF ALL

Few things are as lasting as the bond between sisters. In her poignant debut, Elizabeth Bass explores the lengths one cobbled-together family will go to for each other, and the power of a connection that never fades…

Sassy Spinster Farm is a place to find solace. At least, that’s what it’s become since Rue Anderson and her sister Laura transformed their childhood Texas homestead into a successful tourist destination. It’s where guests flock to get their hands dirty and taste food fresh from the garden. And it’s where Rue is raising her pre-teen daughter on her own—while trying to keep her outspoken sister in check.

Few things are as lasting as the bond between sisters. In her poignant debut, Elizabeth Bass explores the lengths one cobbled-together family will go to for each other, and the power of a connection that never fades…

Sassy Spinster Farm is a place to find solace. At least, that’s what it’s become since Rue Anderson and her sister Laura transformed their childhood Texas homestead into a successful tourist destination. It’s where guests flock to get their hands dirty and taste food fresh from the garden. And it’s where Rue is raising her pre-teen daughter on her own—while trying to keep her outspoken sister in check. It’s not easy, but together, it seems there’s nothing the two can’t handle—until an unexpected, and not entirely welcome guest shows up in the middle of one warm summer night.

Heidi Bogue, onetime stepsister to Rue and Laura, is back, and she’s hiding from something. Why else would she return to the place she was dragged to, kicking and screaming, as a teenager? A place she was thrilled to leave when, three years later, she and her mother bolted, leaving Rue and Laura’s father heartbroken? But while Laura is irate, Rue won’t turn Heidi away. Technically, they were once sisters, and to Rue, sisterhood is forever.

Soon, Sassy Spinster Farm is turned upside down by Heidi’s complicated presence. Still, Rue is determined that Heidi, like all their guests, finds the farm a safe place to discover—or remember—what really matters. It’s a revelation that will come sooner than any of them expected, when devastating news shakes the foundation of their tenuous sisterhood.

Moving and uplifting, here is a beautifully written novel about the bonds we are born into and those we create for ourselves—and of the strength that comes in loving without limits.

Elizabeth Bass grew up the youngest of four siblings in rural Texas, where she spent summers watching old movies and dreaming of living in a town big enough to have an Icee machine. She now resides in Montreal with her husband.

“Miss You Most of All is an exuberant celebration of life, love, family and friendship, told with a sassy Texas flair. It’s a perfect balance of humor and heartache, a sweetly satisfying novel that will stay with the reader long after the final page is turned.”
—Susan Wiggs, New York Times bestselling author of Just Breathe

“Elizabeth Bass’s Miss You Most of All is a funny, poignant, and deeply satisfying novel. What I loved about it most of all was the authentic portrait of a family with all its imperfect and humble acts of love-those things that truly make our lives worthwhile.”—Nancy Thayer, New York Times bestselling author of Summer House

“Miss You Most of All is a deliciously great book for those who love real books that depict real life, with all the mess, tears, joy, and laughter that living on this planet – or in this case the Sassy Spinster Farm – involves.”—Cathy Lamb, author of Henry’s Sisters

“Elizabeth Bass has created a trio of Texas sisters whose struggle to meet some of life’s toughest challenges will enthrall you. Utterly warmhearted, it will keep you eagerly turning the pages. Miss You Most of All is a special experience from start to finish.”—Holly Chamberlin, author of One Week in December

Miss You Most Of All is told from the points of view of four different characters: Rue, Laura, Heidi, and Erica. Do you feel the story belongs to one of them more than the others? Was there one character in particular who you sympathized with?

How long would have lasted at the Sassy Spinster Farm? Would you have stuck it out there the full two weeks or demanded a refund the second day?

Sisterhood is central to the story, even between characters that aren’t related, such as Maggie and Erica. What are the different sisterly dynamics between the many characters? Which seem most like the relationships you have experienced?

At one point, Laura decides she never felt any rivalry towards Rue because envying her would have been laughable, like envying the person you were adrift with on a lifeboat. Do Laura’s thoughts in this instance ring true to you? Do you think they seem true to Laura because she and Rue grew up in a rural area, or are most siblings in a lifeboat in one way or another?

What did you think of the relationship between Webb and Laura? Was Laura correct to discourage Webb for so long?

Early in the story, one character says Laura is a bad influence on Erica. Is she? Are there instances in the story when she tries to take a mentoring role with Erica?

Movies are discussed often, and sometimes heatedly, among the characters. Do you believe that common taste in films (or books or music) provides a strong bond between people? Can differing taste cause rifts in relationships?

Have you ever been in the position Laura often finds herself in, of being the only person in the room who dislikes a movie everyone else loves? How would you handle that situation?

The car accident Rue and Laura had when they were teenagers is thought of often but rarely discussed. Whose life was most changed by the accident?

Laura thinks that Rue must have to start every day forgiving her. Do you think this is true? How large a part has guilt played in forming Laura’s character?

What role does Heidi play in the story? Does she disrupt the relationship between Laura and Rue? How would the summer have been different without her?

Laura prides herself in being tough and abrasive, while Heidi openly admits to having many weaknesses. Are they reliable judges of their own characters? Are there points in the story where Laura actually seems more insecure or over-sensitive than Heidi?

The two most prominent male characters, William and Webb, are very different. William is spoken of in negative terms throughout, while Webb is universally adored. Were there things about Webb you disliked? Did you ever feel sympathy toward William?

How does her illness affect Rue? Were there moments when you felt you would have acted differently if you had been in her shoes?

During Rue’s cancer treatment, she grows closer to Heidi while she often seems to hold Laura and Erica at arms length. Why? Have there been stressful moments in your life when you were drawn to the companionship of some a certain friend or family member over others?

The principle setting of Miss You Most Of All is a farm that welcomes guests. In your opinion, what is the appeal of agritourism? Do you think it would attract women more than men?

Is there one character in the book that seems to have more optimism than the others? Who?

Are Heidi and Laura friends at the end of the story? Did you expect them to be?