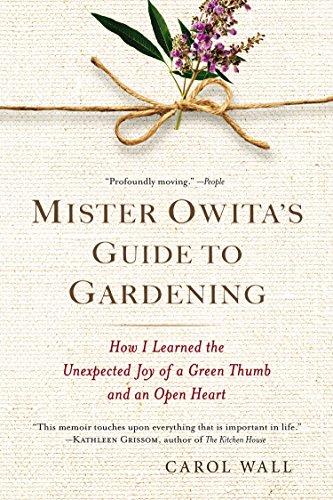 A true story of a unique friendship between two people who had nothing—and ultimately everything—in common.

Carol Wall, living in a lily-white neighborhood in Middle America, is at a crossroads in her life. Her children are grown; she has successfully overcome illness; her beloved parents are getting older. One day she notices a dark-skinned African man tending her neighbor’s yard. His name is Giles Owita. He bags groceries at the supermarket. He comes from Kenya. And he’s very good at gardening.

Before long Giles is transforming not only Carol’s yard, but her life. Though they are seemingly quite different,

A true story of a unique friendship between two people who had nothing—and ultimately everything—in common.

Carol Wall, living in a lily-white neighborhood in Middle America, is at a crossroads in her life. Her children are grown; she has successfully overcome illness; her beloved parents are getting older. One day she notices a dark-skinned African man tending her neighbor’s yard. His name is Giles Owita. He bags groceries at the supermarket. He comes from Kenya. And he’s very good at gardening.

Before long Giles is transforming not only Carol’s yard, but her life. Though they are seemingly quite different, a caring bond grows between them. But Carol and Giles both hold long-buried secrets that, when revealed, will cement their friendship forever.

Carol F. Wall (1951 – 2014): A graduate of Peabody College for Teachers at Vanderbilt University, Carol taught high school English in both public and private schools in Tennessee and Virginia. Her articles and essays centering on family life were popular features in publications such as Southern Living Magazine and The Atlanta Journal-Constitution for more than twenty years. An accomplished public speaker, Carol served as Writer-in-Residence for Roanoke County Schools, where high school audiences learned to look forward to her entertaining and engaging presentations. Beginning in 1973, with her first teaching job at East High School in Nashville, TN—Oprah Winfrey’s alma mater—Carol was known for her ability to connect with listeners, sharing her passion for storytelling and eagerly reaching out to include even the most reluctant student. Whether describing the culinary exploits of her husband—a “binge cooker”—or detailing the day her little beagle Rhudy was banished from an exclusive spa for dogs, she brought a trademark wit and liveliness to ordinary subjects.

Her professional life unfolded against the backdrop of a busy household where the Walls’ three children were joined by a teenage foster son and exchange students from Lithuania and Croatia.

Carol was active in the P.E.O. Sisterhood, a philanthropic educational organization which boasts 250,000 members worldwide and provides college scholarships for women. She sang second soprano in an eight-member women’s ensemble at her church.

She is survived by her husband, three grown children, three beautiful granddaughters, and a grandson. She lived in the Shenandoah Valley of Virginia. She died from complications of breast cancer on December 14, 2014, just nine months after Mister Owita's Guide to Gardening, her first book, was published to critical acclaim. In accordance with her wishes, her husband and children have carried on the message of her book, speaking to readers and groups across the country.

“In this profoundly moving memoir, Owita teaches Wall how to find grace amid heartbreak and to accept that beauty exists because it is fleeting—as in her garden, as in life.” —People, 4 stars

“No green thumb is required to enjoy the warmhearted pleasures of Carol Wall’s moving memoir, Mister Owita’s Guide to Gardening…. magnetically compelling … Grace and gardening go hand-in-glove in this fine book about what really matters in life: friendship, kindness and watching a garden grow.” —USA Today

“With her children grown and out of the house, Carol Wall is obsessed—perhaps overly so—with ripping out her azaleas. That is, until she meets a certain Giles Owita, Kenyan gardener, supermarket bagger, general-life philosopher and perhaps one of the most refined and gracious characters to ever hit the page (except that he’s real)… A warning for the shy: The basic goodness of Owita’s attitude may cause you to beam spontaneously as you read, leading to off looks from strangers at the coffee shop.” —Oprah.com

Carol’s friendship with Giles begins with a letter. She continues her correspondence with him throughout their friendship. How do these letters help them grow together as friends? What do they each gain by writing and receiving the letters? Do you write letters? Can writing down your feelings, worries, news, and so on be therapeutic? How is writing a letter to someone different from—or similar to—keeping a diary or journal?

Aristotle refers to a “friendship of virtue,” in which self-seeking finds no place. Have Carol and Giles attained this level of friendship? If so, when does this happen?

Carol plays the role of both patient and caretaker. How does each of these roles change her? How does her role of caretaker for her parents affect her role as patient?

Carol did not learn until adulthood that the radiation treatment she received as a girl could cause cancer later in life. How would you deal with finding out such news? Do we, as adults, have a right to blame our parents for mistakes they may have made while raising us?

From the beginning, Carol finds Bienta a bit distant. In fact, Carol worries that she may have done something to offend her. She eventually learns that Bienta considers her one of her truest, closest friends. Why is Bienta unable to show this? Why does Carol’s friendship matter so much to Bienta?

Is our Western culture too focused on romantic love, and does this focus make some friendships difficult to pursue? Can you give an example from the story?

Carol makes it clear at the beginning of the book that she is inept at and uninterested in gardening. Yet Giles opens her mind—and her heart. Discuss her evolution as she becomes a true gardener. How do you think her newfound interest in gardening helps her through the toughest times in her life? What parallels can you find between the improvements in Carol’s garden and her spirit? Why does Carol become so interested in gardening? What is it about gardening that gives people such joy? What other hobbies facilitate a sense of renewal and rebirth?

We do not learn the real reason behind the decline in Giles’s health until the end of the book. Were you surprised to find out that he had HIV/AIDS? Or did you suspect that he had a devastating illness? At the beginning of the AIDS epidemic, not only was the diagnosis a death sentence, it was extremely stigmatizing. Consider how the stigma associated with this illness could cause trouble for Giles’s family. Why does he never tell Carol about it, even though she has shared so much of her own personal life with him? How have—or haven’t—times changed over the past three decades?

Carol and Dick often talk about how they have so much to lose. What is Carol most worried about? What would you be most concerned about losing in your own life?

In the legend of Saint Elizabeth, Bienta explains, the Lord changed bread into roses. What do the roses symbolize? What about the bread? Recall that Saint Elizabeth’s husband berates her for stooping to give bread to the poor. When she looks down to find her apron filled with roses, what is the message?

Symbols of Giles’s and Carol’s friendship and love for their families appear throughout the book. For instance, the rose signifies a kind of warmth in human interactions. Point to a time in the book when the rose helps convey the story’s deeper meaning.

When Carol finds Dick’s garment bag with a woman’s dress inside, she accuses him of having an affair. Once the truth is made clear, she apologizes and confesses that she feels like a crazy person. Has Carol actually lost trust in her husband? Or is her overreaction due to something else? In what ways is Carol’s reality turned upside down as a result of her cancer diagnosis?

Giles shares much wisdom from his native culture. Which of his words of wisdom was most striking to you?

Carol and Giles are very different people from very different backgrounds, and they navigate life’s difficult challenges very differently. Yet they are kindred spirits and find that they have more in common as they learn more about each other. What are some of the things—both shared and dissimilar—that brought them close together? Why might their friendship seem so unlikely at the start? How does illness affect their friendship? How will Carol be changed in the life she lives without Giles?