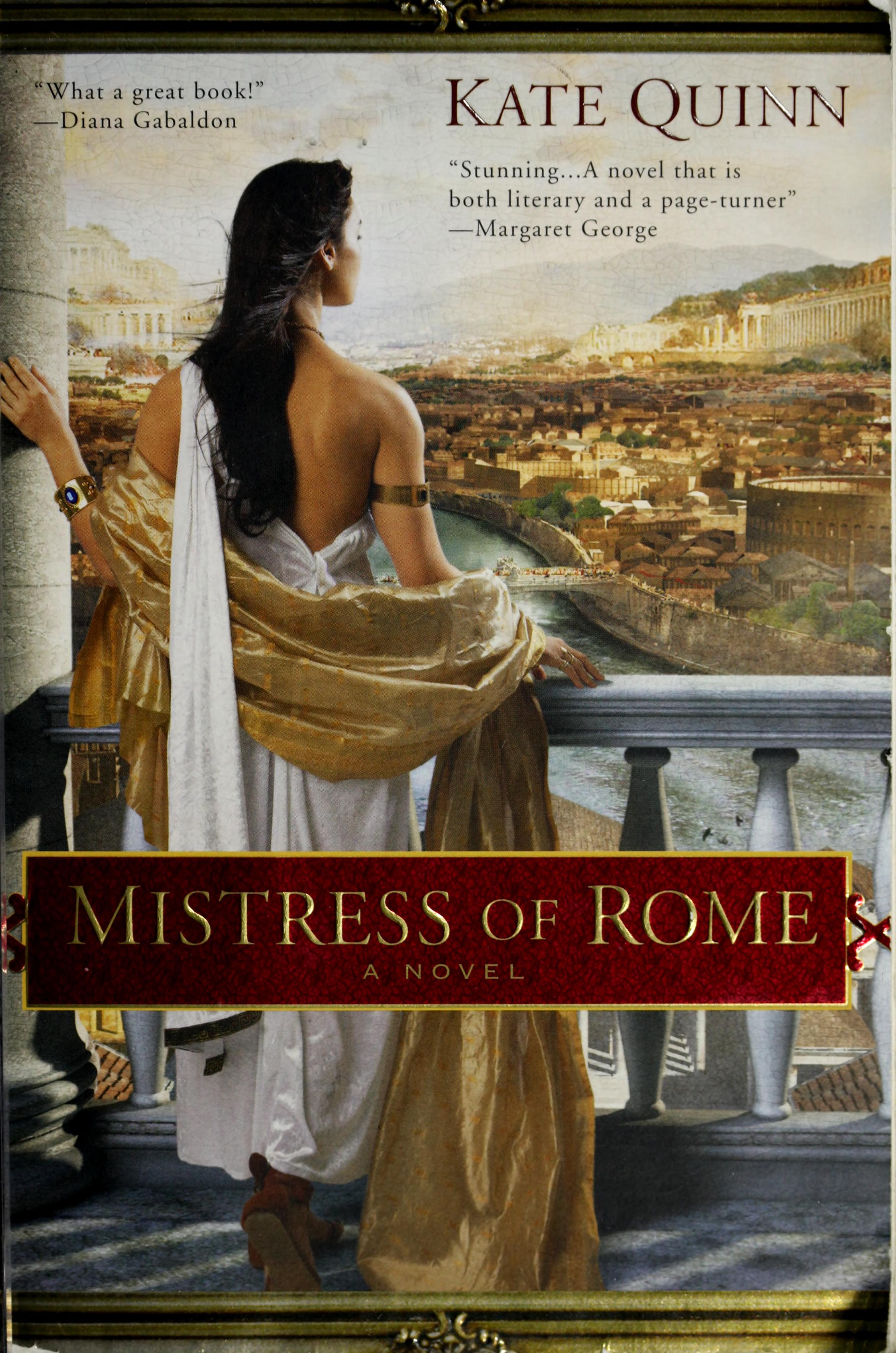 An exciting debut: a vivid, richly imagined saga of ancient Rome from a masterful new voice in historical fiction.

Mistress of Rome is an historical novel brimming with forbidden love and unrelenting revenge. When Thea, a Jewish slave girl, falls in love with Arius, the Colisseum’s rising star, her envious mistress Lepida quickly crushes any hope of their future together. Lepida soon turns her focus to the Imperial court as her appetite for power rages on. Separated from Arius by circumstances beyond her control, Thea reinvents herself as a respected singer for society’s elite,

An exciting debut: a vivid, richly imagined saga of ancient Rome from a masterful new voice in historical fiction.

Mistress of Rome is an historical novel brimming with forbidden love and unrelenting revenge. When Thea, a Jewish slave girl, falls in love with Arius, the Colisseum’s rising star, her envious mistress Lepida quickly crushes any hope of their future together. Lepida soon turns her focus to the Imperial court as her appetite for power rages on. Separated from Arius by circumstances beyond her control, Thea reinvents herself as a respected singer for society’s elite, while Arius continues his undefeated reign as the empire’s most famous fighter.

Their talents quickly catch the eye of a dangerous spectator, Emperor Domitian, who is determined to destroy Thea’s will and end the gladiator’s glory once and for all. When the fate of love and freedom lie within the hands of a merciless ruler, vows will be broken, alliances will form, and blood will spill.

Kate Quinn is a native of southern California. The daughter of a history major, she grew up with anecdotes about Julius Caesar and Alexander the Great instead of Grimm’s fairy tales. That upbringing turned into Mistress of Rome, written when she was a freshman in college.

“Quinn convincingly conjures the terrifying reign of Emperor Domitian in her solid debut that follows the travails of Thea, a slave girl and mistress to the emperor. … Quinn’s command of first-century Rome is matched only by her involvement with her characters; all of them, historical and invented, are compelling and realistic, and she explores their dark sides without crossing into gratuitousness. Readers will finish eager for a sequel, which is a good thing because Quinn has left the door wide open for a follow-up. This should make a splash among devotees of ancient Rome.” —Publishers Weekly

“Kate Quinn is a mistress of storytelling. She gives us a wonderful and intensely emotional spectacle, full of sound and fury. She skillfully intertwines the private lives of her characters with huge and shocking events. A deeply passionate love story, tender and touching, in the heat and danger of the brutal arena that was Ancient Rome. An exhilarating read. Quinn is a remarkable new talent.” —Kate Furnivall, author of The Girl from Junchow

“What a great book!…one of the best things I’ve read in months and months. Full of great characters…So gripping your hands are glued to the book, and so vivid it burns itself into your mind’s eye and stays with you long after you turn the final page.” —New York Times bestselling author Diana Gabaldon

From the moment we meet Arius we are also introduced to his inner demon. At his core the Barbarian is a noble and kind-hearted soul, while the voice that haunts him is a ruthless killer. How do you think this maniacal monologue ever began within him? How can his son avoid inheriting this same curse?

Sold into slavery and torn away from her one true love, Thea also carries with her the guilt and shame associated with the murder of her family. How does the habit of spilling her own blood help her cope with her troubled past? Which other characters participate in similar self-destructive tendencies and why?

Thea admits that even after sharing the Emperor’s bed, and spending days on end with him, that she does not truly know Domitian at all. Does any character truly know the Emperor and, if so, why has he given them his confidence?

One on-going theme in this book is forbidden relationships. Nessus has a long-standing romantic relationship with Ganymede, an imperial slave. If both of these men are seen as servants in the eyes of Domitian, and it is not uncommon for Roman men to prefer male lovers, why do you think they choose to keep their feelings for one another a secret? What other characters have relationships, either romantic or platonic, that must remain undisclosed?

Lepida’s cruelty towards Thea is incomparable. Does Thea ever show her the same level of cruelty? Does either character ever display any sort of mercy towards the other? Discuss the relationship between slave and master and the varying degrees of cruelty in slave/master pairings in this story.

The Emperor’s astrologer, Nessus, reads Arius’ palm after one of his great victories.  Nessus foresees three fates: “He will die once by fire, once by the sword, and once as an old man.” After “dying” by fire in the dark hall of the Gate of Death, Arius supposedly has a long full life ahead of him.  Did he ever die by the sword in this story? Is this referring to the many “deaths” he suffers within the arena? What do you think this means?

The Empress, Lady Julia, and Thea all fear and hate Domitian. While we know his reasons for being so intrigued by Thea, what characteristics drew the Emperor to the other two women?  How do women in this story empower themselves or each other when faced with incredible obstacles?

Lepida’s disgust for Sabina is very clear to everyone from her servants to her own husband. Why do you think she hates her child so much? Why did she give up the chance to transform her daughter into an unconditionally adoring ally? Was Marcus’ influence over their daughter too strong for Lepida to overcome or did she have other reasons?

Do you believe Marcus should’ve tried to divorce Lepida? Do you feel his influence in the senate would’ve been enough to expose Lepida? Was there anyone Marcus could have turned to for help in protecting himself and his family from Lepida’s ambitions?

The themes of loyalty and betrayal lie at the heart of this story. The most striking example is one family’s motto:  “To be a Norbanus is to serve.” Paulinus’ loyalty to the Emperor is understandably strong at the onset, but why does his dedication remain once Domitian’s true self is revealed? Why does he risk his life to save the Emperor?  Why does he leave Thea for Lepida? Why do you think he betrays those who love him, yet protects those who would not hesitate to destroy him?

Discuss the impact of social class on the citizens of Rome. Aside from family name (Norbanus), deceit (Lepida), and ownership (Thea), what other ways can Romans advance from the level of society they are born into?

“Only one lord and god in Rome.” Power is a questionable and ever-shifting force in the narrative. Who do you feel is the most powerful person in Rome and why? A slave with tremendous inner strength? A barbarian with incomparable physical prowess? A ruler with the all-encompassing influence? A priestess with divine certainty? Another character?

Paulinus’ hatred of, and infatuation with, Lepida is an addiction. If he longs to be everything his father is, what is the connection he feels for this woman other than physical lust?

Lepida regards Thea as nothing more than a whore because of the sexual acts forced upon her in the Pollia home. However, during their lifetime it is Lepida who chose to have multiple partners while married. What other double standards appear throughout the course of this story? How do men and women on every level of society perpetuate them?

After a rather uncomfortable scene with the Emperor and several others, Marcus pleads with Calpurnia to remain betrothed to his son. Throughout both incidents, his concern for her safety is undeniable. Did their relationship grow from this point?  Do you believe Marcus chose his son’s bride with an ulterior motive? Why do you think Calpurnia chose to stay?