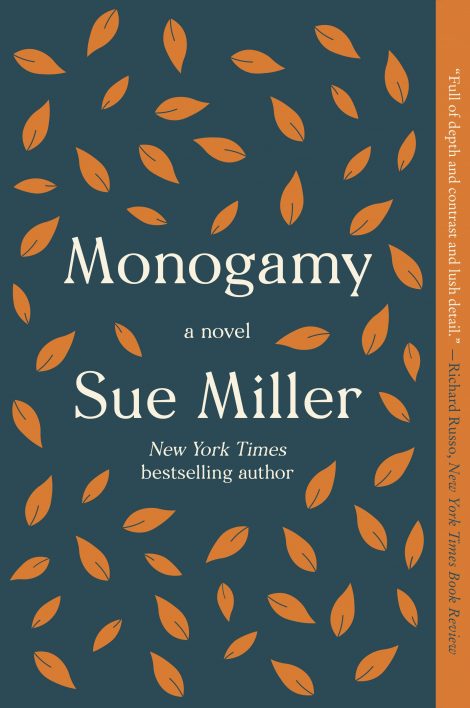 Graham and Annie have been married for nearly thirty years. Their seemingly effortless devotion has long been the envy of their circle of friends and acquaintances. By all appearances, they are a golden couple.

Graham is a bookseller, a big, gregarious man with large appetites—curious, eager to please, a lover of life, and the convivial host of frequent, lively parties at his and Annie’s comfortable house in Cambridge. Annie, more reserved and introspective,

Graham and Annie have been married for nearly thirty years. Their seemingly effortless devotion has long been the envy of their circle of friends and acquaintances. By all appearances, they are a golden couple.

Graham is a bookseller, a big, gregarious man with large appetites—curious, eager to please, a lover of life, and the convivial host of frequent, lively parties at his and Annie’s comfortable house in Cambridge. Annie, more reserved and introspective, is a photographer. She is about to have her first gallery show after a six-year lull and is worried that the best years of her career may be behind her. They have two adult children; Lucas, Graham’s son with his first wife, Frieda, works in New York. Annie and Graham’s daughter, Sarah, lives in San Francisco. Though Frieda is an integral part of this far-flung, loving family, Annie feels confident in the knowledge that she is Graham’s last and greatest love.

When Graham suddenly dies—this man whose enormous presence has seemed to dominate their lives together—Annie is lost. What is the point of going on, she wonders, without him?

Then, while she is still mourning Graham intensely, she discovers a ruinous secret, one that will spiral her into darkness and force her to question whether she ever truly knew the man who loved her.

Sue Miller is the bestselling author of While I Was Gone, The Distinguished Guest, For Love, Family Pictures, Inventing the Abbotts, and The Good Mother. She lives in Cambridge, Massachusetts.

“A sensual and perceptive novel. . . . With humor and humanity, Miller resists the simple scorned-wife story and instead crafts a revelatory tale of the complexities—and the absurdities—of love, infidelity, and grief.”  —O, the Oprah Magazine

“The emotional beauty of Monogamy arises from the impact of her characters’ interactions on one another, and how their memories of those interactions and of other events shape, shift and reshape.” -BookPage, Cover Interview (starred review)

“Miller takes on and renews familiar themes of trust and betrayal between husbands and wives, parents and children, and does so with her signature crystalline focus and boundless empathy. The grieving process is hard enough to endure without having to question everything one ever knew about the deceased, an emotional minefield Miller traverses with grace and authenticity that are both haunting and vital.” -Booklist (starred review)

“Annie never truly wants to let Graham go, as if, in the end, that’s what monogamy really means. This is a beautiful book…during this time when family means more than ever.” -Associated Press

“In an absorbing and meticulously crafted page-turner…Miller depicts both her characters and their Cambridge environs with such tenderness and precision that many readers will feel regret when Miller’s story, like life itself, reaches its inevitable end.” -Boston Globe

1. Graham and Annie are very different people. What attracts them to each other?

2. Do you think they have a good marriage?

3. Graham is portrayed as a gregarious, likeable person. Does his infidelity influence or change your opinion of him?

4. One underlying theme of the novel is the preservation of self in a committed relationship. Do you think Annie sacrifices her identity to this marriage? Does Graham give up anything?

5. Annie is a photographer. What does this choice of profession tell us about her?

7. Sarah says Annie is “unreadable.” Would you agree?

8. Contrast Graham and Annie’s marriage with the marriage of Lucas and Jeanne. How do you account for the differences?

9. What did you make of Annie’s reaction when she found Graham dead beside her in bed?

10. When we learn unpleasant truths about those who have died, how do we process that information and come to terms with our conflicted memories?

11. For a time, Annie focuses on the memories of her childhood friend, Sofie Kahn. What does this tell us about what she is going through?

12. What do you think of Annie’s relationship with Graham’s ex-wife, Frieda.

13. How does the reunion between Annie and Ian Pedersen drive the final outcome of the novel? What does Annie gain or lose from the encounter?

14. Do you think the title Monogamy is meant to be emblematic or ironic?

Annie had been single for seven years when she met Graham. Whenever she thought about her first marriage, even long after it had ended, her primary emotion was a kind of shame. Shame that she could have been attracted to someone she felt so little for in the end. That she could have lived with him for so long.

She had excuses, if she’d wished to use them. Alan had been remarkably handsome in a preppy kind of way—tall, with a thatch of blond hair that flopped elegantly across his forehead. And she’d been young, so young and ignorant that she’d regarded him at first as a superior sort of person—he knew where he was going, he knew what he wanted. Annie was shakier on those issues. She had just graduated from college with not much sense of what came next.

Then there was the fact that he felt he was a superior person too. He had an easy contempt for the people around him—even for their friends. For a while, Annie had enjoyed sharing that careless contempt, unsure of herself socially as she was. How much fun! to come home from a party and sit around bad-mouthing all the people who’d been there. How sophisticated, how competent, it had made her feel. How adult—she was twenty-three.

Soon enough, though, as she might have foreseen, Alan’s disdain turned to her. To her life, to her useless preoccupations—she was taking course after course in photography at the Museum School then. To her pitiful income (she did portraits of dogs for their owners, she photographed family reunions and graduations and birthday parties). To her self-delusions (she kept sending off photographs of local events to The Phoenix, to The Boston Globe, in hopes that she could get work as a stringer). It seemed to her a failure of character that she hadn’t known this would be coming, that she should have imagined she’d be exempt from his general critique of the world.

It was when she was driving home with him from a party, a party he was speaking of in that familiar, slightly irritated tone, that it occurred to her that she simply didn’t like him. Over the next few days she came, almost literally, to see him differently. Everything that had seemed admirable about him seemed just the opposite now. Small. Defensive. How could she ever have thought she loved him?

She didn’t love him. She felt she never had.

Had she? Had she ever loved anyone? She felt herself to be without love—it seemed a kind of incapacity, a hollowness within her. This was the first time she had this thought so clearly, and also the first time she connected it—slowly, over some months of self-examination—to her photography. In her work, she felt, she was like him, like Alan. Cold, removed. Was it possible that this was why she’d chosen it?

In any case, she withdrew from Alan. He noticed this, finally. He wanted to talk about it, but she felt she had nothing she could say to him. How could you say, “I don’t like you anymore”? “I don’t think I ever loved you”?

She suggested they separate. He was surprised by this, which surprised her. She had assumed, as critical of her as he was, that he must have wanted out too. They had some weeks, then, of anguished back-and-forth. He pleaded. Annie felt awful. But even in the midst of his pleading, he couldn’t resist offering more of his general critique of her, and that made it easier for her, the ending.

She left. She took none of the things that they’d accumulated together—the expensive wedding gifts from his kind, moneyed parents and their moneyed friends. The silver vegetable servers with covers, the napkin rings, the fish knives, the linen tablecloth and napkins—she left all of it behind, thinking of it as the price she was paying for her freedom. At the time, she thought there ought to be a price, she felt so guilty, so ashamed of this failure.

But she kept the camera his parents had given her when she’d begun to be interested in photography, an expensive Rolleiflex that she’d only slowly learned how to use. That, and her books, many of them purchased for courses in college, filled with markings and notes she’d taken in a neat, careful handwriting she could barely recognize as her own.

So she was free, at twenty-nine. Which should have made her feel liberated, expansive. And she did, in some ways. Except that for a long while after the divorce, she was uncomfortable around men. For at least a year, maybe longer, she read almost every gesture, every remark, as controlling, as dangerous for her.

But all of that was behind her by the time she met Graham. By then she had shed that sense of danger, she could enjoy men again. And some of that enjoyment was the pleasure of casual sex, something that wouldn’t have been possible for her when she emerged from college, when she married at twenty-three. But postdivorce, in a world that had itself changed, Annie learned to sleep around. Happily. Enthusiastically. Fairly indiscriminately too, so that later she couldn’t call up the names of some of the men she’d had sex with.

Sometimes, though, at the end of one of these casual relationships, she experienced a kind of melancholy that lingered for days or longer, a sense that, free as she felt she was, pleasurable as she felt that freedom to be, there was part of her that might be hoping for something else. Some deeper connection.