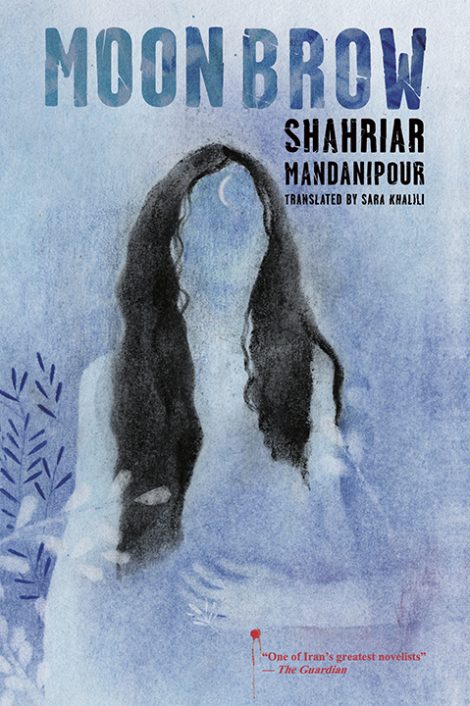 Before he enlisted as a soldier in the Iran–Iraq War and disappeared, Amir Yamini was a playboy whose only concerns were seducing women and riling his religious family. Five years later, his mother and sister Reyhaneh find him in a hospital for shell-shocked soldiers, his left arm and most of his memory lost. Amir is haunted by the vision of a mysterious woman whose face he cannot see—the crescent moon on her forehead shines too brightly. He names her Moon Brow.

Back home in Tehran, the prodigal son is both hailed as a living martyr to the cause of Ayatollah Khomeini’s Revolution and confined as a dangerous madman.

Before he enlisted as a soldier in the Iran–Iraq War and disappeared, Amir Yamini was a playboy whose only concerns were seducing women and riling his religious family. Five years later, his mother and sister Reyhaneh find him in a hospital for shell-shocked soldiers, his left arm and most of his memory lost. Amir is haunted by the vision of a mysterious woman whose face he cannot see—the crescent moon on her forehead shines too brightly. He names her Moon Brow.

Back home in Tehran, the prodigal son is both hailed as a living martyr to the cause of Ayatollah Khomeini’s Revolution and confined as a dangerous madman. His sense of humor, if not his sanity, intact, Amir cajoles Reyhaneh into helping him escape the garden walls to search for Moon Brow. Piecing together the puzzle of his past, Amir decides there’s only one solution: he must return to the battlefield and find the remains of his severed arm.

All the while, two angels sit on our hero’s shoulders and inscribe the story in enthrallingly distinctive prose. Wildly inventive and radically empathetic, steeped in Persian folklore and contemporary Middle East history, Moon Brow is an unforgettable epic of love, war, morality, faith, and family. 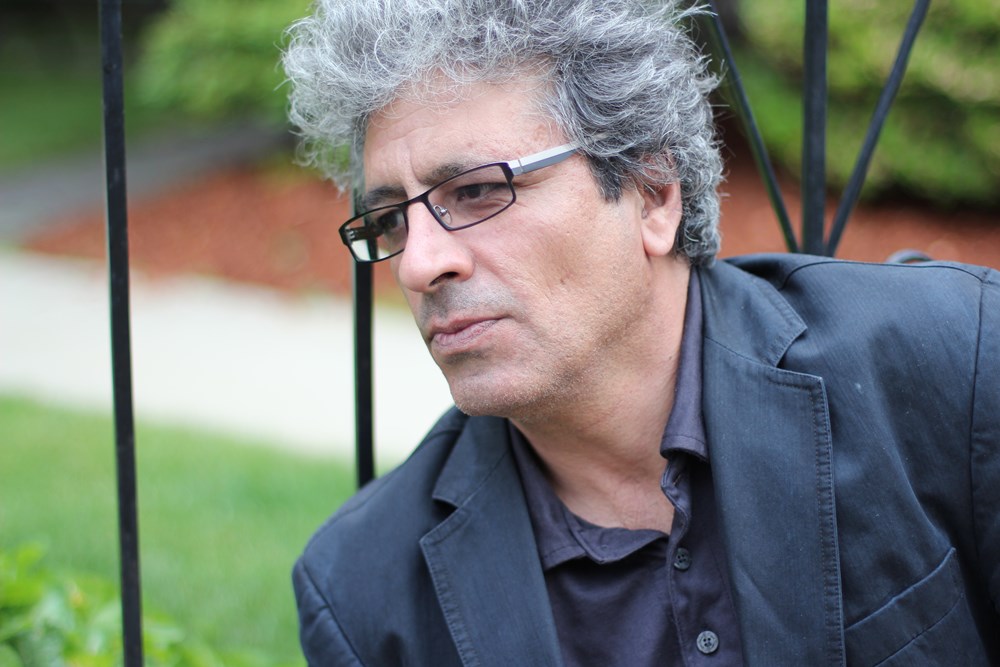 Shahriar Mandanipour is one of Iran’s most accomplished writers, the author of nine volumes of fiction, one nonfiction book, and more than 100 critical essays. Born in 1957 in Shiraz, Iran, he studied political science at Tehran University and bore witness to the 1979 revolution. His first collection of stories was published in 1989; his works were banned between 1992 and 1997. In 2006, he moved to the United States and has held fellowships at Brown, Harvard, and Boston College. Mandanipour’s first novel to appear in English, Censoring an Iranian Love Story (Knopf,  2009), has been widely acclaimed. He currently teaches creative writing at Tufts University.

Sara Khalili is an editor and translator of contemporary Iranian literature. Her translations include Censoring an Iranian Love Story by Shahriar Mandanipour, The Pomegranate Lady and Her Sons by Goli Taraghi, The Book of Fate by Parinoush Saniee, and Rituals of Restlessness by Yaghoub Yadali. She has also translated several volumes of poetry by Forough Farrokhzad, Simin Behbahani, Siavash Kasraii, and Fereydoon Moshiri. Her short story translations have appeared in The Kenyon Review, The Virginia Quarterly Review, EPOCH, GRANTA, Words Without Borders, The Literary Review, PEN America, Witness, and Consequence.

“History and politics, Islam and Morality Police permeate without overwhelming the narrative as it shifts between Amir’s present and past. His relationship with his sister is also a rich, tender thread throughout. Mandanipour, an Iranian writer whose first novel in English, Censoring an Iranian Love Story, elicited allusions to M.C. Escher and Rubik’s Cube, does not do things simply here in his second, either. Sections alternate between a scribe ‘on his right shoulder’ and one on his left, like good and bad angels, providing both omniscient narrative and Amir’s first-person reveries. The device suggests Amir’s unsteady grasp of reality, his own story, as his damaged, drifting mind tries to paste together dimly recalled shards of a broken life. The prose also reveals a writer in total control, easily moving from the banter of youth to lyrical or sensual flights befitting Amir’s former liking for poetry and seduction, to Persian folktales or hallucinatory fever dreams from a brain unhinged by battle, medication, and remorse. A remarkable vision of the elusiveness of redemption and love.”—Kirkus, Starred Review

“In dazzling flashbacks, Amir gradually pieces together the narrative of his past as a womanizing Casanova and a soldier who sees the horrific casualties of war up close. Mandanipour uses this love story, ably translated by Sara Khalili, as the canvas for a larger picture of a country routinely disrupted by revolution and war. In a sense, Khan’s fractured mind might just as well be a stand-in for Iran’s own fragile history…. [A] dazzling mosaic of a troubled young man and a troubled yet gloriously rich nation.”— Poornima Apte, Booklist, Starred Review

“Written in the heightened language of dreams, if dreams were always so dark, this long-anticipated work from exiled Iranian award winner Mandanipour (Censoring an Iranian Love Story) features Amir Yamini, a young wastrel given to drinking, womanizing, and blasphemy, who shames his devout Iranian family and is finally carted off and flogged by the Revolutionary Guards. He ends up a soldier fighting against Iraq, is hit by shrapnel, and after losing an arm and much of his memory, is confined to the mental hospital from which his mother and sister rescue him after years of searching. Frustrated but loyal sister Reyhaneh is willing to help him recall his life and find Moon Brow, the woman he repeatedly envisions, her face hidden by the glow of a crescent moon, and the novel winds toward that goal through a labyrinth of gorgeously rendered scenes. These scenes are ingeniously imparted by two scribes: Amir’s more manageable self, reputedly perched on his right shoulder, and a demonically angry self perched on his left, mirroring his split soul and that of his country. VERDICT: Highly recommended for literary lovers.”—Barbara Hoffert, Library Journal, Starred Review

1. How does the narration, alternating between two angel scribes on Amir’s shoulders, shape your reading experience? Why do you think the author chose to write the novel this way?

2. Apart from the innovative narrative technique, Moon Brow is also a story that plays with time and space. How does the non-linear progression of the narration align with the story and its protagonist?

3. How do the descriptions of Amir’s environment—his home, the garden, the mountains, the hospital—interplay with those of his wartime traumas, physical and psychological?

4. What is the importance of Baba Shahu’s character in Amir’s journey? Is he a metaphor?

5. How is Amir’s quest to find his the remains of his arm like or unlike a traditional hero’s journey? How do the other characters—Reyhaneh, Agha Haji, Amir’s mother—fit into it?

6. Women play a central, if conflicted role in Amir’s present and past. How would you describe Amir’s relationships with women, and how do they change?

7. “Moon Brow” comes from an old Persian folktale that, in a sense, is the Persian version of Cinderella: in Moon Brow’s story, her father convinces her to kill her own mother so her father can marry someone else. His new wife becomes her cruel stepmother, treating the girl as a servant. When she helps a monster at the bottom of a well, the girl receives a glowing diamond crescent on her forehead as a reward. Why do you think Mandanipour chose this title? Could the novel be considered a modern folktale?

8. How might Agha Haji be a symbol or a metaphor for the Islamic Revolution and its limitations?

9. Mandanipour used to be the chief editor for a literary magazine that was banned in Iran, and many of his stories have been censored in his homeland. Does his experience with censorship come through in this narrative, both in terms of language and character?

10. If you were to categorize this novel into a genre, which one would you pick? Why?

11. How did reading this novel alter your perceptions of Iran, the Islamic Revolution, and the Iraq-Iran war?