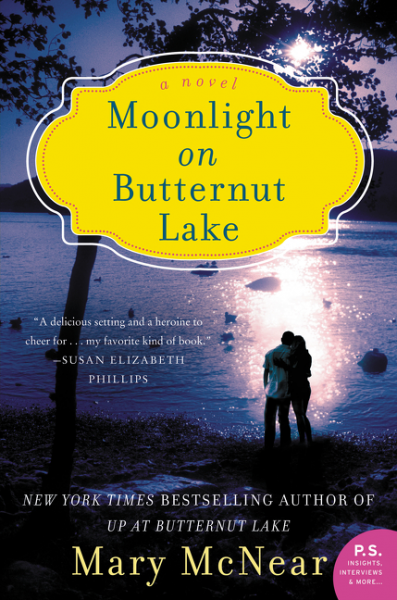 On the run from her abusive husband, Mila Jones flees Minneapolis for the safety and serenity of Butternut Lake. Ready to forge a new life, Mila's position as home health aide to Reid Ford is more than a job. It’s a chance at a fresh start. Though her sullen patient seems determined to make her quit, she refuses to give up on him.

Haunted by the car accident that nearly killed him, Reid retreats to his brother’s cabin on Butternut Lake and lashes out at anyone who tries to help. Reid wishes Mila would just go away. . .until he notices the strength, and the secrets, behind her sad, brown eyes.

Against all odds, Mila slowly draws Reid out. Soon they form a tentative, yet increasingly deeper, bond as Mila lowers her guard and begins to trust again, and Reid learns how to let this woman who has managed to crack through his protective shell into his life. While the seemingly endless days of summer unfold, Reid and Mila take the first steps to healing as they discover love can be more than just a dream.

Mary McNear, the New York Times and USA Today bestselling author of the Butternut Lake series, writes in a local doughnut shop, where she sips Diet Pepsi, observes the hubbub of neighborhood life, and tries to resist the constant temptation of freshly made doughnuts. Mary bases her novels on a lifetime of summers spent in a small town on a lake in the northern Midwest. She lives in San Francisco with her family.

“A delicious setting and a heroine to cheer for, Moonlight on Butternut Lake is my favorite kind of book, one that treads that pleasurable line between romance and women’s fiction. Enjoy! ” — Susan Elizabeth Phillips

“Mary McNear takes the reader on an emotional journey with this story of second chances, starting over, and the healing power of love. A book to relax, enjoy and savor any time of year, but especially during the long, lazy days of summer.” — Susan Wiggs

Mila has always taken care of herself. As a child she got herself to school, made her own meals, and did her homework with little help from anyone. When she was a young adult, she got a job to help her mom pay the bills and paid her own way through community college. She becomes responsible, self-reliant, and develops a strong work ethic— all good qualities. But what’s missing? What qualities must Mila embrace if she is to find happiness? Do you think it was justified? How much time do you spend on personal matters during the workday? What do you consider excessive?

Throughout the novel, Mila expresses a longing for a childhood she did not have. She longed to live in a picturesque small town like Butternut instead of the “hardscrabble” neighborhood where she grew up. She longed to have a mother who did fun things with her, taught her to swim, and took her to picnics and events. How is longing different than envy? How does Reid show Mila that it is not too late to have some of those things she longed for as a child?

Mila and Reid’s relationship got off to a pretty rocky start. At what point did their relationship change direction? And what precipitated this change?

Buoyancy, or a lack of buoyancy, is a theme throughout the novel: Mila’s feels “lighter without her wedding ring to weigh her down”; Mila imagines sinking “like a stone” to the bottom of the lake; Allie teaches Mila how to float in the water and she feels weightless and free; Mila feels “buoyed” the first time she flees Brandon; Reid feels “lightness” and weightlessness while watching Mila learn to swim. What does buoyancy represent for Mila?

Although Mila’s mother is depicted as a disinterested and, somewhat, neglectful parent with an alcohol problem, Mila never condemns her. However, Mila’s develops friendships with three women older than herself: Heather, Lonnie, and Ms. Thompson. How are these women different than her mother? And what kind of relationship does Mila have with them?

Unlike Mila, Reid is bitter about his childhood. He’s angry that his father wasn’t there for him and he’s jealous of his father’s closeness to his half-sister, Chloe. How did this bitterness bring about Reid’s accident and prolong his recovery? What allows Reid to finally overcome these feelings and move on?

Reid comes to the realization that his relentless drive to be successful in the boat yard business, largely inspired by a need to prove himself to his father, had eclipsed the pleasure he took in working with boats. Some people are driven by a desire to “show,” or outdo, their own parents, or in some cases to “settle a score.” Is this kind of motivation inherently destructive? Why was Reid unable to get any satisfaction from his success? How does Reid resolve to change things?

The closer Reid gets to Mila the more he sees her as radiating light: her skin is “lit from within”; her nightgown glows in the moonlight; her hands are translucent and like the “velvety touch of the moonlight itself”: her skin glows faintly in the “near darkness”; Reid sees a “flicker of light” in her eyes. Why would Reid perceive Mila this way? Does this perception have anything to do with his own state of mind after the accident? And how is moonlight used to reveal both Reid’s feelings about Mila and the development of Reid and Mila’s relationship?

Brandon is controlling and abusive toward Mila. He sees her as a possession, not an independent person. In the course of their relationship he works to isolate her from her friends and prevents her from achieving her goal to be a nurse. In the novel, how does he rationalize his belief that Mila’s feelings and choices are irrelevant? And are these characteristics common in abusive men?

Although Mila’s initial interest in being a nurse may have been inspired by her childhood admiration for Heather, her interest does not wane as she grows older. Why is nursing a good career choice for Mila?