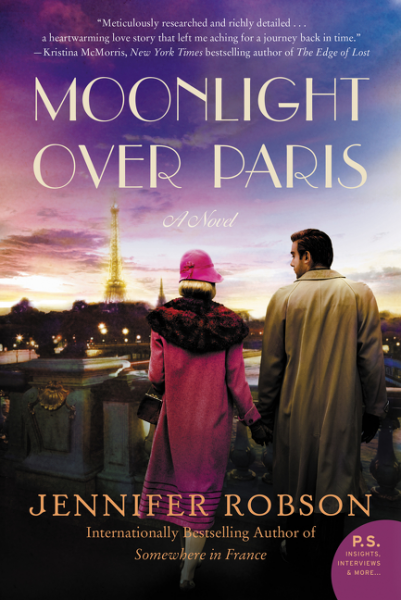 An aristocratic young woman leaves the sheltered world of London to find adventure, passion, and independence in 1920s Paris in this mesmerizing story from the USA Today and internationally bestselling author of Somewhere in France and After the War is Over.

Recovering from a broken wartime engagement and a serious illness that left her near death, Lady Helena Montagu-Douglas-Parr vows that for once she will live life on her own terms. Breaking free from the stifling social constraints of the aristocratic society in which she was raised,

An aristocratic young woman leaves the sheltered world of London to find adventure, passion, and independence in 1920s Paris in this mesmerizing story from the USA Today and internationally bestselling author of Somewhere in France and After the War is Over.

Recovering from a broken wartime engagement and a serious illness that left her near death, Lady Helena Montagu-Douglas-Parr vows that for once she will live life on her own terms. Breaking free from the stifling social constraints of the aristocratic society in which she was raised, she travels to France to stay with her free spirited aunt. For one year, she will simply be Miss Parr. She will explore the picturesque streets of Paris, meet people who know nothing of her past—and pursue her dream of becoming an artist.

A few years after the Great War’s end, the City of Light is a bohemian paradise teeming with actors, painters, writers, and a lively coterie of American expatriates who welcome Helena into their romantic and exciting circle. Among them is Sam Howard, an irascible and infuriatingly honest correspondent for the Chicago Tribune. Dangerously attractive and deeply scarred by the horror and carnage of the war, Sam is unlike any man she has ever encountered. He calls her Ellie, sees her as no one has before, and offers her a glimpse of a future that is both irresistible and impossible.

As Paris rises phoenix-like from the ashes of the Great War, so too does Helena. Though she’s shed her old self, she’s still uncertain of what she will become and where she belongs. But is she strong enough to completely let go of the past and follow her heart, no matter where it leads her?

Artfully capturing the Lost Generation and their enchanting city, Moonlight Over Paris is the spellbinding story of one young woman’s journey to find herself, and claim the life—and love—she truly wants.

Jennifer Robson is the USA Today and #1 Toronto Globe & Mail bestselling author of Somewhere in France and After the War is Over. She holds a doctorate from Saint Antony’s College, University of Oxford. She lives in Toronto with her husband and young children.

“Returns with mastery once more to the World War I era…. This is a moving and memorable book.” — Pam Jenoff, bestselling author of The Winter Guest

“Meticulously researched and richly detailed, Moonlight Over Paris paints an enchanting picture… The elegance of Robson’s prose flows through every page, sweeping the reader from London’s aristocracy to the Parisian art scene and beyond… a heartwarming love story that left me aching for a journey back in time.” — Kristina McMorris, New York Times bestselling author of The Edge of Lost

“The vibrant whirl of the Paris art community is the ideal setting for this novel of healing and growth. Robson’s lovely prose allows the reader to savor the atmosphere of the Lost Generation, as well as the personal struggles of her characters.” — RT Book Reviews

Other cities in Europe—for instance Rome, Venice, Barcelona, Vienna, or London—are arguably just as beautiful and historic as Paris. Why, then, are

we so drawn to the City of Lights? And what is it about Paris in the 1920s that we find so particularly fascinating?

Did you enjoy encountering real-life figures in the pages of Moonlight Over Paris? Is it possible to portray such iconic figures as F. Scott Fitzgerald and Ernest Hemingway with any degree of accuracy? Or has their fame obscured the real men behind the legends?

This novel is set six years after the end of World War I, but even still the characters and Paris itself are affected by those years. How do we see this with our characters? What do we see of this in the city itself ?

Would a year in Paris, with all the freedom that Helena enjoys, have been possible for most women in that era? Or was it the case that her family’s wealth and status made it more easily achievable for her?

If you were able to read the story of one of the other fictional characters in the book, whose would it be? Étienne’s? Aunt Agnes’s? Another of the secondary figures?

Music, visual art, and the written word play a big role in this story. Why do you think that Paris became such an epicenter for artistic expression during this time? Do you think the aftermath of the war played any part in this?

How does the character of Helena change and evolve over the course of the novel?

In what ways is Sam a typical man

of his time? Are there ways in which

he transcends the conventions and

expectations of his era?

Do you think Helena ends up fulfilling the promise she makes to herself at the beginning of the book?