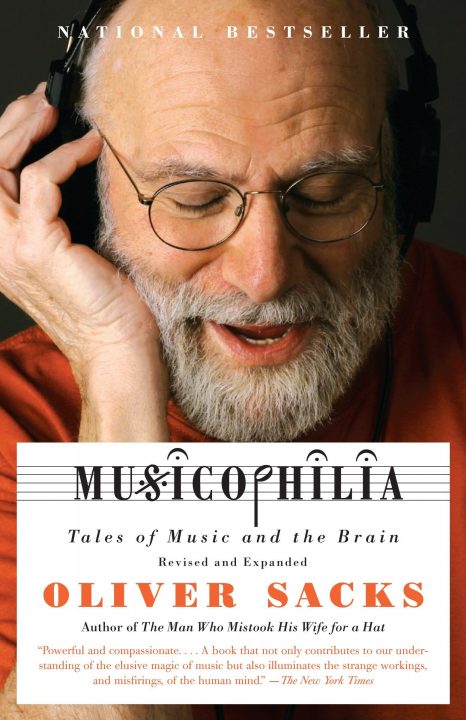 Tales of Music and the Brain

With the same trademark compassion and erudition he brought to The Man Who Mistook His Wife for a Hat, Oliver Sacks explores the place music occupies in the brain and how it affects the human condition. In Musicophilia, he shows us a variety of what he calls “musical misalignments.” Among them: a man struck by lightning who suddenly desires to become a pianist at the age of forty-two; an entire group of children with Williams syndrome, who are hypermusical from birth; people with “amusia,” to whom a symphony sounds like the clattering of pots and pans;

With the same trademark compassion and erudition he brought to The Man Who Mistook His Wife for a Hat, Oliver Sacks explores the place music occupies in the brain and how it affects the human condition. In Musicophilia, he shows us a variety of what he calls “musical misalignments.” Among them: a man struck by lightning who suddenly desires to become a pianist at the age of forty-two; an entire group of children with Williams syndrome, who are hypermusical from birth; people with “amusia,” to whom a symphony sounds like the clattering of pots and pans; and a man whose memory spans only seven seconds-for everything but music.

Dr. Oliver Sacks spent more than fifty years working as a neurologist and writing books about the neurological predicaments and conditions of his patients, including The Man Who Mistook His Wife for a Hat, Musicophilia, and Hallucinations. The New York Times referred to him as “the poet laureate of medicine,” and over the years he received many awards, including honors from the Guggenheim Foundation, the National Science Foundation, the American Academy of Arts and Letters, the American Academy of Arts & Sciences, and the Royal College of Physicians. His memoir On the Move was published shortly before his death in August 2015.

“Powerful and compassionate. . . . A book that not only contributes to our understanding of the elusive magic of music but also illuminates the strange workings, and misfirings, of the human mind.” —The New York Times

“Curious, cultured, caring. . . . Musicophilia allows readers to join Sacks where he is most alive, amid melodies and with his patients.” —The Washington Post Book World

“Sacks spins one fascinating tale after another to show what happens when music and the brain mix it up.” —Newsweek

In the preface Sacks presents differing views on the origins and evolution of the music instinct. On first reading, which explanation is the most persuasive? Did the book change or confirm your opinion?

Discuss the style and structure of Musicophilia. How does Sacks blend personal anecdotes, case histories, theories, and empirical research into an engaging narrative? How does he bring out the humanity of the patients he describes? What do the explanations of complex brain functions add to the portraits of each individual?

Tony Cicoria “grew to think [that he] . . . had been transformed and given a special gift, a mission, to ‘tune in’ to the music that he called, half metaphorically, ‘the music from heaven'”. Is art by its very nature a “spiritual” endeavor? Does Sacks’s conclusion that “even the most exalted states of mind, the most astounding transformations, must have some physical basis or at least some physiological correlate in neural activity” belittle the value of artistic expression?

In chapter four (Music on the Brain: Imagery and Imagination) and chapter five (Brainworms, Sticky Music, and Catchy Tunes), Sacks explores normal musical imagery, which almost everyone experiences, and the pathological version, when “music repeats itself incessantly, sometimes maddeningly, for days on end”. Do his explanations of the psychological and neurological components of these phenomena support his suggestion that people are more susceptible to brainworms today because of the pervasiveness of music in our lives? Does Anthony Storr’s theory that even unwanted music has a positive effect mitigate Sacks’s darker outlook?

The stories of musical hallucinations demonstrate the disruptive power of music. Using these stories as a starting point, discuss the distinction between the “brain” and the “mind.” What accounts for the different ways people react to involuntary mental intrusions? What do the various coping mechanisms people employ reveal about biological determination and the exercise of choice and free will?

“Musicality comprises a great range of skills and receptivities, from the most elementary perceptions of pitch and tempo to the highest aspects of musical intelligence and sensibility…” What do Sacks’s descriptions of extreme conditions like amusia and disharmonia show about the many factors—neurological, cultural, and experiential—that shape an individual’s response to music?

Sacks also introduces people who represent the “highest aspects of musical intelligence and sensibility.” What insights do these examples of extraordinary or unusual gifts offer into average musical sensibilities? What do his examinations of absolute pitch and synesthesia, as well as his stories about musical savants and the high level of musicality among blind people, reveal about the brain’s innate strengths and weaknesses?

The story of Clive Wearing is one of the most memorable tales in Musicophilia. While it illustrates the persistence of musical memory with clarity and precision, it is much more than a well-written “case history.” How does Sacks capture the emotional impact of Wearing’s devastating amnesia without descending into melodrama or sentimentality? What details help create a sense of Wearing as a distinct and sympathetic individual? What is the significance of Deborah’s description of Clive’s “at-homeness in music” and their continuing love for one another?

Music therapy is used to treat conditions ranging from Parkinson’s and other movement disorders to Alzheimer’s and other forms of dementia. In what ways does music therapy represent the perfect intersection of scientific knowledge and deep-seated personality traits like intuition, creativity, and compassion?

The relationship between music and universal human activities is a central theme in Musicophilia. Sacks writes, for instance, “The embedding of words, skills, or sequences in melody and meter is uniquely human. The usefulness of such an ability to recall large amounts of information, particularly in preliterate culture, is surely one reason why musical abilities have flourished in our species”. Drawing on the stories and studies presented in Musicophilia and on your own experiences, discuss the roles music plays in human society. Talk about its importance in creating a sense of community, evoking spiritual or religious feelings, and stimulating sexual desire, for example.

In a review for The New York Review of Books [March 6, 2008] Colin McGinn noted “Sacks generally confines himself to classical music, saying little specifically about jazz and rock music.” How do the emotional, psychological, and physical reactions to popular music differ from those elicited by classical music? Do you think a familiarity with or preference for certain kinds of music might influence a reader’s reaction to Musicophilia?

What does Musicophilia show about science’s ability to resolve intriguing quirks and mysteries? What do the new technology Sacks describes portend for future discoveries about how the brain works?

Does Musicophilia offer a new way of understanding what makes us human? Which facts, theories, or speculations did you find particularly compelling?