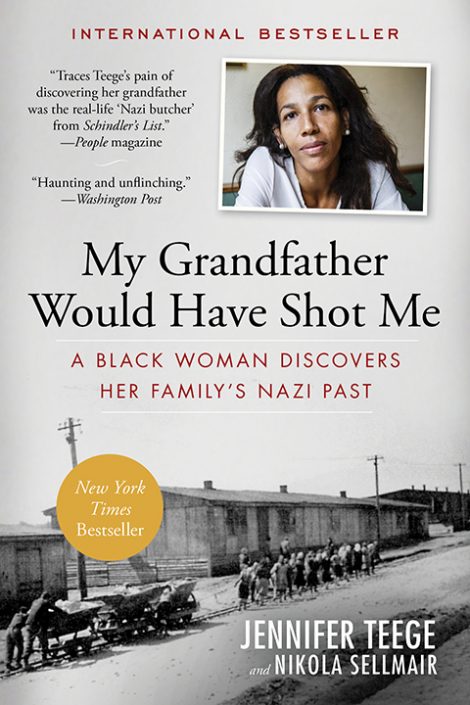 MY GRANDFATHER WOULD HAVE SHOT ME

A Black Woman Discovers Her Family's Nazi Past

When Jennifer Teege, a German-born black woman, happened to pluck a library book from the shelf her life would be irrevocably altered. Recognizing photos of her mother and grandmother, she discovers a horrifying fact: Her grandfather was Amon Goeth, the vicious Nazi concentration camp commandant chillingly depicted by Ralph Fiennes in Schindler’s List. The more Teege reads about Goeth,

When Jennifer Teege, a German-born black woman, happened to pluck a library book from the shelf her life would be irrevocably altered. Recognizing photos of her mother and grandmother, she discovers a horrifying fact: Her grandfather was Amon Goeth, the vicious Nazi concentration camp commandant chillingly depicted by Ralph Fiennes in Schindler’s List. The more Teege reads about Goeth, the more certain she becomes: If her grandfather had met her—a black woman—he would have killed her.

Teetering on the brink of severe depression, Teege delves into researching her family’s past. Over the two years that follow, she tentatively reconnects with her estranged mother Monika, travels to Poland to see firsthand the sites of her grandfather’s crimes, and returns to Israel, where she had attended college and learned fluent Hebrew.

Award-winning journalist Nikola Sellmair contributes an interwoven narrative that draws on original interviews with Teege’s family and friends and adds historical context. Ultimately, Teege’s resolute search for the truth leads her, step by step, to the possibility of her own liberation.

Jennifer Teege worked in advertising for 16 years before becoming an author. She lives in Germany with her husband and two sons. A New York Times and international bestseller, My Grandfather Would Have Shot Me is her first book.

Nikola Sellmair has been a reporter in Hamburg at Germany’s Stern magazine since 2000. Her work has received many awards, including the German-Polish Journalist Award, for the first-ever article about Jennifer Teege’s singular story.

“Haunting and unflinching . . . A memoir, an adoption story and a geopolitical history lesson, all blended seamlessly into an account of Teege’s exploration of her roots.”—Washington Post

1. The Washington Post describes this book as equal parts “memoir, adoption story, and geopolitical history lesson.” As Jennifer Teege researches and reflects on the Goeth family, Nazism, and her own adoption and childhood, which do you think affects her the most? Which was most interesting to you?

2. The book is presented from intertwined perspectives: Jennifer’s first-person and Nikola Sellmair’s third-person. Discuss how the two authors complement and complicate one another’s views.

3. On crossing the boundary between fiction and history, Jennifer writers, “Slowly I begin to grasp that the Amon Goeth in the film Schindler’s List is not a fictional character, but a person who actually existed in flesh and blood” (7). How has your view of the Holocaust been shaped by popular culture? Has this book changed your perspective?

4. Jennifer has trouble reconciling her memory of a beloved grandmother with the truth of a woman who lived with Goeth and ignored his atrocities. What does Jennifer’s attitude towards Ruth, and Ruth’s towards Goeth, suggest about love? Is it possible to love one part of a person while rejecting another?

5. Monika Goeth, named for a father she never met, belongs to the first generation of descendants of Nazi perpetrators. She believes it was “Goeth’s story that shaped her identity” (99). How was her experience with the family history different from Jennifer’s? How will that experience change for Jennifer’s children? Can family trauma be passed down through generations?

6. In an interview Jennifer says, “Today I see [Monika] not only as my birth mother, but also as a woman with her own story and history. She suffers from the weight of the past.” What do you think motivated Monika to put Jennifer up from adoption and to conceal the family secret from her?

7. After living in Israel, Jennifer has strong ties to its culture and people. She feels guilty about her family history and is reluctant to share it with her Israeli friends. Discuss her fears and their reactions. How would you have acted in Jennifer’s place, or reacted as her friend?