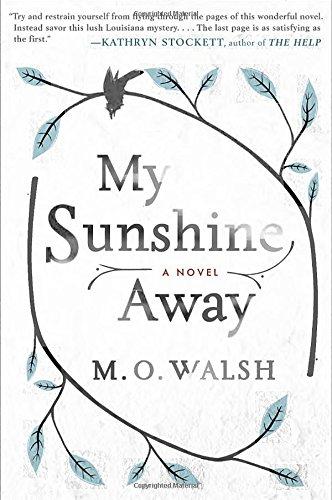 My Sunshine Away unfolds in a Baton Rouge neighborhood best known for cookouts on sweltering summer afternoons, cauldrons of spicy crawfish, and passionate football fandom. But in the summer of 1989, when fifteen-year-old Lindy Simpson—free spirit, track star, and belle of the block—experiences a horrible crime late one evening near her home, it becomes apparent that this idyllic stretch of Southern suburbia has a dark side, too.

In My Sunshine Away, M.O. Walsh brilliantly juxtaposes the enchantment of a charmed childhood with the gripping story of a violent crime, unraveling families, and consuming adolescent love.

My Sunshine Away unfolds in a Baton Rouge neighborhood best known for cookouts on sweltering summer afternoons, cauldrons of spicy crawfish, and passionate football fandom. But in the summer of 1989, when fifteen-year-old Lindy Simpson—free spirit, track star, and belle of the block—experiences a horrible crime late one evening near her home, it becomes apparent that this idyllic stretch of Southern suburbia has a dark side, too.

In My Sunshine Away, M.O. Walsh brilliantly juxtaposes the enchantment of a charmed childhood with the gripping story of a violent crime, unraveling families, and consuming adolescent love. Acutely wise and deeply honest, it is an astonishing and page-turning debut about the meaning of family, the power of memory, and our ability to forgive.

M.O. Walsh’s fiction and essays have appeared in The New York Times, Oxford American, The Southern Review, American Short Fiction, Epoch, and Best New American Voices, among others. He is a graduate of the MFA program at the University of Mississippi and is currently the director of the Creative Writing Workshop at the University of New Orleans, where he lives and works, happily, with his wife and family.

“My Sunshine Away is that rarest find, a page-turner you want to read slowly and a literary novel you can’t look away from. At times funny, at times spine-tinglingly suspenseful, and at times just flat-out wise, this novel is also a meditation on memory, how it can destroy or damn us but redeem us as well. It’s a book to read and reread, one that will only get better with time, like its writer. I’m already excited about M. O. Walsh’s next book, whatever it is.”

“Try and restrain yourself from flying through the pages of this wonderful novel. Instead savor this lush Louisiana mystery that takes you back to what life tasted like when you were still somewhat naïve to the ways of the world. Not just Southern, but American in its vivid Baton Rouge colors and scents, treetops and grasses, My Sunshine Away is the story of how the events of our youth profoundly affect us as adults. The last page is as satisfying as the first. A mystery you cannot wait to solve.”

“I really loved this book. I am in awe, swept up in the quiet beauty of the prose, and in the wisdom and compassion of the narrator. I can’t praise it enough. My Sunshine Away is not a thriller; it is not genre fiction; but it’s realism at its finest, and it is a page turner—a story made memorable in paragraph after paragraph by the brilliance of its author, and by the scope of the questions he asks as to how we live this life to the fullest as loving and moral beings. It’s about love, obsession, and pain. Such a beautiful book. Such a remarkable book. I can’t praise it enough.”

“This is literature of the highest order. Although the book snaps with the tautness of a thriller––and Walsh keeps the reader guessing until the end, as the best mystery writers do––My Sunshine Away also asks essential questions, like how much responsibility we have to each other, and whether we can we ever fully reassemble the pieces of broken lives. And while Walsh hints at answers, it’s his willingness to engage such ideas that makes My Sunshine Away an important work of fiction. We need more novelists with the guts and clarity of M. O. Walsh.”

—Matthew Thomas, New York Times–bestselling author of We Are Not

The narrator recounts the story out of chronological order. Why did the author choose to tell the story this way? How does this narrative structure allow him to explore the ways that events in our youth shape our lives as adults?

The book begins with the story of a rape. It also deals with child and animal abuse, as well as death and divorce. Yet the book does not feel bleak. Could My Sunshine Away be described as an optimistic book? If so, how?

Although this novel is intensely personal, it also touches on moments of national importance, such as the Challenger disaster and the serial killer Jeffrey Dahmer. How have world events affected you personally? At a time of constant news coverage, is there a difference between local and global?

At the end of the book, we realize the narrator is telling this story to his unborn son. Were you surprised? Did this discovery change your perception of the book and why he was telling the story? Do you think this “audience” affects the way it is told? Is it more honest, or less so?

The title of the book is the last line of the Louisiana state song, “You Are My Sunshine.” In what ways does it play into the themes of the book?

Chapter 28 is devoted entirely to the differences between Baton Rouge and New Orleans. How is this important to understanding the relationship between Lindy and the narrator?

Look back to the discussion of whiteflies on page 47. These insects reappear several times later in the book. How might they serve as a metaphor for memory in the novel?

Although the narrator spends years of his life thinking about Lindy Simpson, he comes to the realization that he never really knew her. What mistakes was he making in his attempts to understand her, both before and after the crime?

When the narrator begins the story of what he discovered in Jacques Landry’s private room, he has to stop himself and recount a good memory first. He says that doing this helps “keep darkness from winning.” Is it cowardly or perhaps dishonest for him to shuffle his memories around in this way, or is it wise? In what ways do you use your own memories to construct the type of person you want to be?

During one of the narrator’s lowest points, he gets great comfort from his uncle Barry. However, Uncle Barry is far from a typical role model. Why is he such a great help for the narrator? Can people to serve as role models or counselors even when they are deeply flawed?

The narrator is never named in the book. Why do you think the author decided to leave him unnamed? How does this affect the reading experience?

At one point, Julie tells the narrator that it would be up to her if she wanted to share painful moments in her past with him. Should partners share everything with each other, or are some secrets important to keep? Does anyone really know everything about someone else? How do we navigate our own secrets with the people we love?

At the end of the novel, the narrator tells his son that he wants the two of them to be “good men.” What does that mean to the narrator? Does the novel suggest a way of becoming a good man? Is the idea of being a “good” person wholly subjective, or are there moral touchstones to goodness that we all agree on?