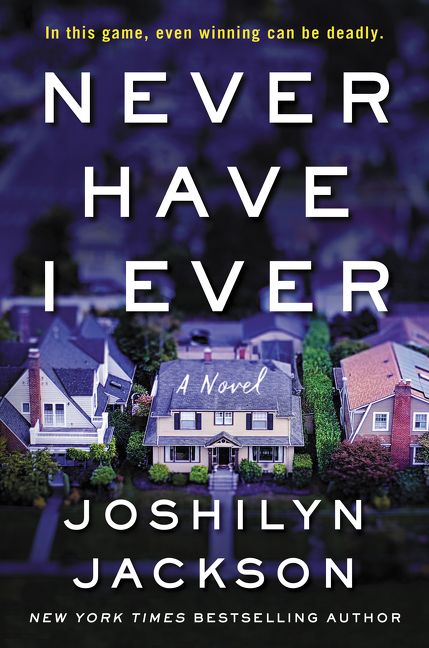 NEVER HAVE I EVER

From New York Times bestselling author Joshilyn Jackson, a twisting novel of domestic suspense in which a group of women play a harmless drinking game that escalates into a war of dark pasts.

In this game, even winning can be deadly…

Amy Whey is proud of her ordinary life and the simple pleasures that come with it—teaching diving lessons, baking cookies for new neighbors, helping her best friend, Charlotte, run their local book club. Her greatest joy is her family: her devoted professor husband, her spirited fifteen-year-old stepdaughter, her adorable infant son.

From New York Times bestselling author Joshilyn Jackson, a twisting novel of domestic suspense in which a group of women play a harmless drinking game that escalates into a war of dark pasts.

In this game, even winning can be deadly…

Amy Whey is proud of her ordinary life and the simple pleasures that come with it—teaching diving lessons, baking cookies for new neighbors, helping her best friend, Charlotte, run their local book club. Her greatest joy is her family: her devoted professor husband, her spirited fifteen-year-old stepdaughter, her adorable infant son. And, of course, the steadfast and supportive Charlotte. But Amy’s sweet, uncomplicated life begins to unravel when the mysterious and alluring Angelica Roux arrives on her doorstep one book club night.

Sultry and magnetic, Roux beguiles the group with her feral charm. She keeps the wine flowing and lures them into a game of spilling secrets. Everyone thinks it’s naughty, harmless fun. Only Amy knows better. Something wicked has come her way—a she-devil in a pricey red sports car who seems to know the terrible truth about who she is and what she once did.

When they’re alone, Roux tells her that if she doesn’t give her what she asks for, what she deserves, she’s going to make Amy pay for her sins. One way or another.

To protect herself and her family and save the life she’s built, Amy must beat the devil at her own clever game, matching wits with Roux in an escalating war of hidden pasts and unearthed secrets. Amy knows the consequences if she can’t beat Roux. What terrifies her is everything she could lose if she wins.

A diabolically entertaining tale of betrayal, deception, temptation, and love filled with dark twists leavened by Joshilyn Jackson’s trademark humor, Never Have I Ever explores what happens when the transgressions of our past come back with a vengeance.

Joshilyn Jackson is the New York Times bestselling author of seven novels, including gods in Alabama and A Grown-Up Kind of Pretty. Her books have been translated into a dozen languages. A former actor, Jackson is also an award-winning audiobook narrator. She lives in Decatur, Georgia, with her husband and their two children.

“The more Roux and Amy became obsessed with each other, the more obsessed I became with the book. Jackson is a master… Fans of Joshilyn Jackson and newcomers alike will eat this book up. I did, and I’m hungry again.” – Sara Gruen, New York Times bestselling author of Water for Elephants

“A heart-pounding tale of cat and mouse with twists you won’t see coming. Just when you think you couldn’t be more shocked, Jackson delivers a mind-blowing ending. Riveting!” – Liv Constantine, internationally bestselling author of The Last Mrs. Parrish

“We’re looking forward to Never Have I Ever bringing Jackson the credit she deserves. Jackson’s latest is a classic interloper tale—a woman named Roux enters the lives of a seemingly perfect family and of course, her disruption reveals all the family’s darkest secrets.” – CrimeReads, “The Most Anticipated Crime Books of Summer”

“Nail-biting suspense… Jackson builds on her talent for creating imperfect, capable, and multi-layered characters to write smart suspense, driven by the intelligence and determination of the instigator and her prey… Never Have I Ever marks a new high in Jackson’s career.” – Booklist (starred review)

What a storyteller!” – Adriana Trigiani

“Joshilyn Jackson is one the best writers of the new generation.” – Mark Childress

“Jackson excels at weaving a wholly absorbing story with vivid characters… [she makes] some affecting points about the importance of the stories we tell to each other and to ourselves.” – Susan Rebecca White, author of A Soft Place to Land

1. Never Have I Ever is told through Amy’s eyes, but she doesn’t always tell the reader all the facts. Would you consider Amy an unreliable narrator? How do you think the story might have differed from another perspective, particularly Roux’s?

2. Amy describes diving as a solace because it reminds her how large the world is. Why is this idea a comfort to Amy? Do you have anything that offers you peace in the same way?

3. No one is all bad or all good. Should a person be defined by their worst actions or their best? Can anything eventually be forgiven?

4. Roux is an elusive character who Amy has many theories about as the story progresses. Who did you think Roux was? How did your theories change as you read?

5. Amy has a tendency to mother everyone around her: her child and step-child, her friend Char, Luca, and even her husband to some extent. Jackson has been quoted as saying that the most dangerous animal is “a mother anything.” How does Amy’s motherhood influence her moral choices and the risks she is willing to take?

6. Tig says, “You know what’s weird? It’s easier to forgive you than myself.” Why do you think this is? Do you think we tend to blame ourselves more or less than we deserve?

8. How did your impression of Amy and Charlotte’s friendship change over the course of the book? Do you think Amy’s methods of protecting Charlotte are right?

10. What do you make of Roux’s relationship with Luca? How do their lies throughout Never Have I Ever inform what you know about them now? Do you think the action Amy took was justifiable?

11. Never Have I Ever explores the idea of choosing the kind of person we want to be in life. Do you think Amy is a good person? How about Roux?

12. Following that, in what ways are Amy and Roux similar? Different? What do they begrudgingly respect about one another?