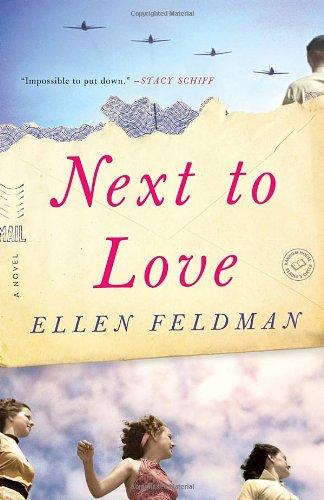 For fans of The Guernsey Literary and Potato Peel Society, The Postmistress, and Hotel on the Corner of Bitter and Sweet, a story of love, war, loss, and the scars they leave set during the years of World War II and its aftermath.

It’s 1941. Babe throws like a boy, thinks for herself, and never expects to escape the poor section of her quiet Massachusetts town. Then World War II breaks out, and everything changes. Her friend Grace, married to a reporter on the local paper, fears being left alone with her infant daughter when her husband ships out;

For fans of The Guernsey Literary and Potato Peel Society, The Postmistress, and Hotel on the Corner of Bitter and Sweet, a story of love, war, loss, and the scars they leave set during the years of World War II and its aftermath.

It’s 1941. Babe throws like a boy, thinks for herself, and never expects to escape the poor section of her quiet Massachusetts town. Then World War II breaks out, and everything changes. Her friend Grace, married to a reporter on the local paper, fears being left alone with her infant daughter when her husband ships out; Millie, the third member of their childhood trio, now weds the boy who always refused to settle down; and Babe wonders if she should marry Claude, who even as a child could never harm a living thing. As the war rages abroad, life on the home front undergoes its own battles and victories; and when the men return, and civilian life resumes, nothing can go back to quite the way it was.

From postwar traumas to women’s rights, racial injustice to anti-Semitism, Babe, Grace, and Millie experience the dislocations, the acute pains, and the exhilaration of a society in flux. Along the way, they will learn what it means to be a wife, a mother, a friend, a fighter, and a survivor. Beautiful, startling, and heartbreaking, Next to Love is a love letter to the brave women who shaped a nation’s destiny.

Ellen Feldman, a 2009 Guggenheim fellow, is the author of Scottsboro, which was shortlisted for the Orange Prize, The Boy Who Loved Anne Frank, and Lucy. She lives in New York City.

“A remarkable novel driven by the powerful engine of most great literature: the yearning for a self.”—Robert Olen Butler, author of the Pulitzer Prize–winning A Good Scent from a Strange Mountain

“An intimate look at how we can be dismantled and rebuilt by changing times.”—O: The Oprah Magazine

“A deftly revealing . . . portrait of the changing face of America . . . heartbreaking reality.”—Marie Claire

For nine years, Babe keeps a terrible secret. How much of a toll do you think it takes on her? Does her hardscrabble background make her tougher than Grace and Millie in the face of adversity?

In the post WWII era, combat fatigue, or what we now call Post Traumatic Stress Disorder, was a dark secret. There was little therapy, and no support groups existed. Do you think in that era Babe could have found better ways to cope with Claude’s problems? Should she have insisted they have a child? How much do you think she regrets not having one? Would you have blamed her if she left him?

Grace and Millie have diametrically opposite reactions to losing their husbands, and both think they are trying to protect their children. Do you think they really believed that or were they merely justifying their own predilections? What effect does Grace’s behavior have on her daughter Amy? What does Millie’s have on her son Jack?

Is Grace really so devoted to Charlie’s memory or is she afraid of a new relationship? What does her breakdown in the front yard say about her feelings toward her late husband and herself?

Is Millie callous or a fierce survivor? Do you see her as a manipulative wife and mother or a woman trying to protect her family?

In an era that regarded misfortune as something to be ashamed of and silent suffering as a virtue, all three women keep secrets from husbands, children, and one another. Our own era believes in openness as a cure, or at least a form of solace. Do you think Babe, Grace, and Millie would have had an easier time of it if they had shared their problems and unhappiness?

Grace’s father-in-law King often behaves badly, resenting and punishing vets who returned from the war. Can you sympathize with his heartbreak and loss nonetheless? What does the sexual advice he gives Grace say about the mores and beliefs of the era?

The psychiatrist tells Grace the solution to her problem is a husband. Were you surprised at how hidebound America was at the time or do you think in many ways –- race, religion, gender, sex — we have not changed as much as we think?

How do you interpret the triangle of Grace, Mac, and Morris? Do you think they would behave differently today? What would you have done in Grace’s place after she married Morris?

This is a book about three women who are friends from childhood, but their friendship is occasionally rocky. Do you think the recent spate of books and movies about women’s friendship romanticize the relationship as we used to romanticize men-women relationships?

Babe was a poor girl who married into the middle class. Both of Grace’s husbands had plenty of money. After the war, Millie’s husband Al makes a small fortune. Yet their lives remain in many way similar. They have cleaning women but not staffs of maids, nannies, and drivers. They shop, but not excessively. What do you think this says about the beginning of the most prosperous period in America’s history and our own era?