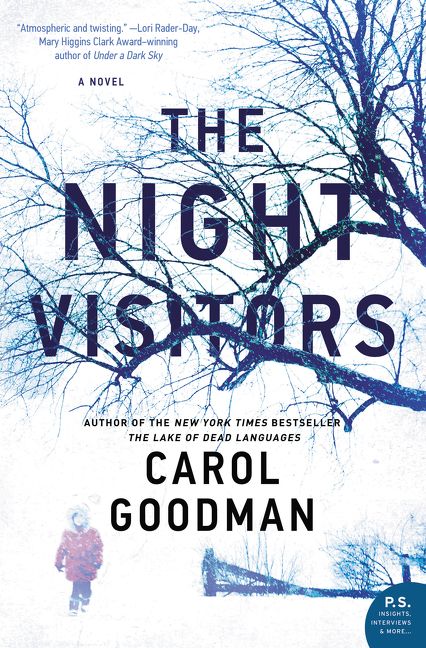 The latest thriller from the internationally bestselling author of The Lake of Dead Languages and The Other Mother, a story of mistaken identities and missed chances, forgiveness, and vengeance.

ALICE gets off a bus in the middle of a snowstorm in Delphi, NY. She is fleeing an abusive relationship and desperate to protect…

OREN, ten years old, a major Star Wars fan and wise beyond his years. Though Alice is wary, Oren bonds nearly instantly with…

MATTIE, a social worker in her fifties who lives in an enormous run-down house in the middle of the woods.

The latest thriller from the internationally bestselling author of The Lake of Dead Languages and The Other Mother, a story of mistaken identities and missed chances, forgiveness, and vengeance.

ALICE gets off a bus in the middle of a snowstorm in Delphi, NY. She is fleeing an abusive relationship and desperate to protect…

OREN, ten years old, a major Star Wars fan and wise beyond his years. Though Alice is wary, Oren bonds nearly instantly with…

MATTIE, a social worker in her fifties who lives in an enormous run-down house in the middle of the woods. Mattie lives alone and is always available, and so she is the person the hotline always calls when they need a late-night pickup. And although according to protocol Mattie should take Alice and Oren to a local shelter, instead she brings them home for the night. She has plenty of room, she says. What she doesn’t say is that Oren reminds her of her little brother, who died thirty years ago at the age of ten.

But Mattie isn’t the only one withholding elements of the truth. Alice is keeping her own secrets. And as the snowstorm worsens around them, each woman’s past will prove itself unburied, stirring up threats both within and without. 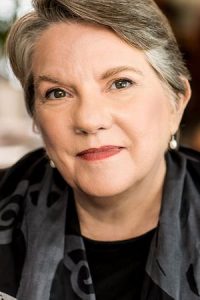 Carol Goodman is the critically acclaimed author of fourteen novels, including The Lake of Dead Languages and The Seduction of Water, which won the 2003 Hammett Prize. Her books have been translated into sixteen languages. She lives in the Hudson Valley with her family, and teaches writing and literature at the New School and SUNY New Paltz.

“Brilliantly conceived and executed…Goodman provides readers with that delicious frisson that comes from not knowing what will happen next.” – Publishers Weekly (starred review)

“You can always call upon Carol Goodman when you need an atmospheric and twisting tale. Full of half-truths and vengeful ghosts of the past, The Night Visitors will inspire readers to linger long into the night.” – Lori Rader-Day, Mary Higgins Clark Award-winning author of Under a Dark Sky

“Well-defined characters, including the marvelous Sister Martine, who runs a sanctuary for women in trouble; slowly building suspense; and an ending that pulls out all the stops make for a really good wintry read that’s reminiscent of Mary Stewart and Victoria Holt. Best by firelight.” – Booklist

OREN FALLS ASLEEP at last on the third bus. He’s been fighting it since Newburgh, eyelids heavy as wet laundry, pried up again and again by sheer stubbornness. Finally, I think when he nods off. If I have to answer one more of his questions I might lose it.

Where are we going? he asked on the first bus.

He stared at me, even in the darkened bus his eyes shining with too much smart for his age, and then looked away as if embarrassed for me. An hour later he’d asked, as if there hadn’t been miles of highway in between, Where’s it safe?

There are places, I’d begun as if telling him a bedtime story, but then I’d had to rack my brain for what came next. All I could picture were candy houses and chicken-legged huts that hid witches. Those weren’t the stories he liked best anyway. He preferred the book of myths from the library (it’s still in his pack, racking up fines with every mile) about heroes who wrestle lions and behead snake-haired monsters.

There are places . . . I began again, trying to remember something from the book. Remember when Orestes flees the Furies and he goes to some temple so the Furies can’t hurt him there?

It was the temple of Apollo at Delphi, Oren said, and it’s called a sanctuary.

No one likes a smarty-pants, I countered. Since he found that mythology book he likes to show off how well he’s learned all those Greek names. He’d liked Orestes right away because their names were alike. I’d tried to read around the parts that weren’t really for kids, but he always knew if I skipped over something and later I saw him reading the story to himself, staring at the picture of the Furies with their snake hair and bat wings.

At the next bus stop he found the flyer for the hotline. It was called Sanctuary, as if Oren’s saying the word had made it appear. I gave him a handful of change to buy a candy bar while I made the call. I didn’t want him to hear the story I’d have to tell. But even with him across the waiting room, standing at the snacks counter, his shoulders hunched under the weight of his Star Wars backpack, he looked like he was listening.

The woman who answered the phone started to ask about my feelings, but I cut to the chase and told her that I’d left my husband and taken my son with me. He hit me, I said, and he told me he’d kill me if I tried to leave. I have no place to go . . .

My voice had stuttered to a choked end. Across the waiting room, Oren had turned to look at me as if he’d heard me. But that was impossible; he was too far away.

The woman’s voice on the phone was telling me about a shelter in Kingston. Oren was walking across the waiting room. When he reached me he said, It can’t be a place anyone knows about.

I rolled my eyes at him. Like I didn’t know that. But I repeated his words into the phone anyway, trying to sound firm. The woman on the other end didn’t say anything for a moment, and looking into Oren’s eyes, I was suddenly more afraid than I’d been since we left.

I understand, the woman said at last, slowly, as if she were speaking to someone who might not understand. I recognized the social worker’s “explaining” voice and felt a prickle of anger that surprised me. I’d thought that I was past caring what a bunch of morally sanctimonious social workers thought about me. We can arrange for a safe house, one no one will know about. But you might have to stay tonight in the shelter.

Oren shook his head as if he could hear what the woman said. Or as if he already knew I’d messed up.

It has to be tonight, I said.

Again the woman paused. In the background a cat meowed and a kettle whistled. I pictured a comfortable warm room—framed pictures on the walls, throw pillows on a couch, lamplight—and was suddenly swamped by so much anger I grew dizzy. Oren reached out a hand to steady me. The woman said something but I missed it. There was a roaring in my ears.

. . . give me the number there, she was saying. I’ll make a call and call you right back.

I read her the number on the pay phone and then hung up. Oren handed me a cup of hot coffee and a doughnut. How had he gotten all that for a handful of change? Does he have money of his own he hasn’t told me about? I slumped against the wall to wait, and Oren leaned next to me. It will be all right, I told him. These places . . . they have a system.

He nodded, jaw clenched. I touched his cheek and he flinched. I looked around to see if anyone had noticed, but the only other occupants of the station were a texting college student, the old woman behind the snacks counter, and a drunk passed out on a bench. When the phone rang I nearly jumped out of my skin.

I picked up the phone before it rang again. For a second all I heard was breathing and I had the horrible, crazy thought that it was him. But then the woman spoke in a breathless rush, as if she’d run somewhere fast. Can you get the next bus for Kingston?

I told you no shel— I began, but the woman cut me off.

At Kingston you’ll get a bus to Delphi. Someone will meet you there, someone you can trust. Her name’s Mattie—she’s in her fifties, has short silvery hair, and she’ll probably be wearing something purple. She’ll take you to a safe house, a place no one knows about but us.

I looked down at Oren and he nodded.

Okay, I said. We’ll be there on the next bus.

I hung up and knelt down to tell Oren where we were going, but he was already handing something to me: two tickets for the next bus for Kingston and two for Delphi, New York. Look, he said, the town’s got the same name as the place in the book.

That was two hours and two buses ago. The last bus has taken us through steadily falling snow into mountains that loom on either side of the road. Oren had watched the swirling snow as if it were speaking to him. As if he were the one leading us here.

It’s just a coincidence, I tell myself, about the name. Lots of these little upstate towns have names like that: Athens, Utica, Troy. Names that make you think of palm trees and marble, not crappy little crossroads with one 7-Eleven and a tattoo parlor.

How did you know where we were going? And how the hell did you get those tickets?

—and what I might do to get the answer out of him.