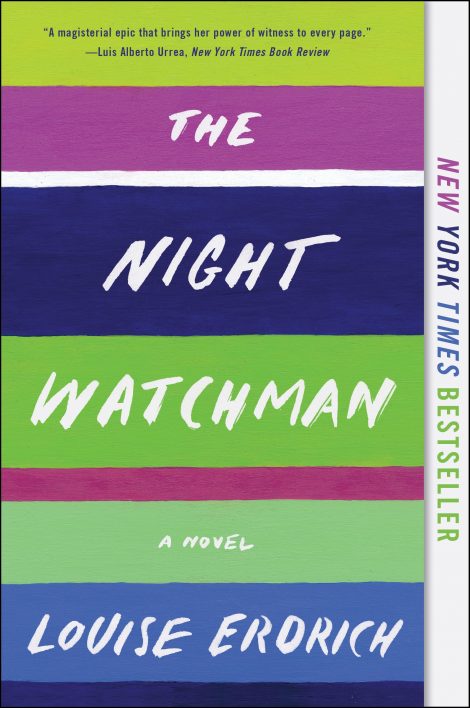 Based on the extraordinary life of National Book Award-winning author Louise Erdrich’s  grandfather who worked as a night watchman and carried the fight against Native dispossession from rural North Dakota all the way to Washington, D.C., this powerful novel explores themes of love and death with lightness and gravity and unfolds with the elegant prose, sly humor, and depth of feeling of a master craftsman.

Thomas Wazhashk is the night watchman at the jewel bearing plant, the first factory located near the Turtle Mountain Reservation in rural North Dakota. He is also a Chippewa Council member who is trying to understand the consequences of a new “emancipation” bill on its way to the floor of the United States Congress.

Based on the extraordinary life of National Book Award-winning author Louise Erdrich’s  grandfather who worked as a night watchman and carried the fight against Native dispossession from rural North Dakota all the way to Washington, D.C., this powerful novel explores themes of love and death with lightness and gravity and unfolds with the elegant prose, sly humor, and depth of feeling of a master craftsman.

Thomas Wazhashk is the night watchman at the jewel bearing plant, the first factory located near the Turtle Mountain Reservation in rural North Dakota. He is also a Chippewa Council member who is trying to understand the consequences of a new “emancipation” bill on its way to the floor of the United States Congress. It is 1953 and he and the other council members know the bill isn’t about freedom; Congress is fed up with Indians. The bill is a “termination” that threatens the rights of Native Americans to their land and their very identity. How can the government abandon treaties made in good faith with Native Americans “for as long as the grasses shall grow, and the rivers run”?

Since graduating high school, Pixie Paranteau has insisted that everyone call her Patrice. Unlike most of the girls on the reservation, Patrice, the class valedictorian, has no desire to wear herself down with a husband and kids. She makes jewel bearings at the plant, a job that barely pays her enough to support her mother and brother. Patrice’s shameful alcoholic father returns home sporadically to terrorize his wife and children and bully her for money. But Patrice needs every penny to follow her beloved older sister, Vera, who moved to the big city of Minneapolis. Vera may have disappeared; she hasn’t been in touch in months, and is rumored to have had a baby. Determined to find Vera and her child, Patrice makes a fateful trip to Minnesota that introduces her to unexpected forms of exploitation and violence, and endangers her life.

Thomas and Patrice live in this impoverished reservation community along with young Chippewa boxer Wood Mountain and his mother Juggie Blue, her niece and Patrice’s best friend Valentine, and Stack Barnes, the white high school math teacher and boxing coach who is hopelessly in love with Patrice.

In the Night Watchman, Louise Erdrich creates a fictional world populated with memorable characters who are forced to grapple with the worst and best impulses of human nature. Illuminating the loves and lives, the desires and ambitions of these characters with compassion, wit, and intelligence, The Night Watchman is a majestic work of fiction from this revered cultural treasure. 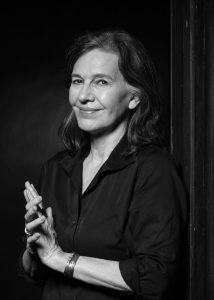 Louise Erdrich is the author of sixteen novels as well as volumes of poetry, children’s books, short stories, and a memoir of early motherhood. Her novel The Round House won the National Book Award for Fiction. The Plague of Doves won the Anisfield-Wolf Book Award and was a finalist for the Pulitzer Prize, and her debut novel, Love Medicine, was the winner of the National Book Critics Circle Award. Erdrich has received the Library of Congress Prize in American Fiction, the prestigious PEN/Saul Bellow Award for Achievement in American Fiction, and the Dayton Literary Peace Prize. She lives in Minnesota with her daughters and is the owner of Birchbark Books, a small independent bookstore.

“Erdrich delivers a magisterial epic that brings her power of witness to every page…We are grateful to be allowed into this world…I walked away from the Turtle Mountain clan feeling deeply moved, missing these characters as if they were real people known to me. In this era of modern termination assailing us, the book feels like a call to arms. A call to humanity. A banquet prepared for us by hungry people.” — Luis Alberto Urrea, New York Times Book Review

“With The Night Watchman, Louise Erdrich rediscovers her genius…This tapestry of stories is a signature of Erdrich’s literary craft, but she does it so beautifully that it’s tempting to forget how remarkable it is…This narrator’s vision is more capacious, reaching out across a whole community in tender conversation with itself. Expecting to follow the linear trajectory of a mystery, we discover in Erdrich’s fiction something more organic, more humane. Like her characters, we find ourselves “laughing in that desperate high-pitched way people laugh when their hearts are broken.” — Ron Charles, Washington Post

“Louise Erdrich’s The Night Watchman is a singular achievement even for this accomplished writer. . . Erdrich, like her grandfather, is a defender and raconteur of the lives of her people. Her intimate knowledge of the Native American world in collision with the white world has allowed her, over more than a dozen books, to create a brilliantly realized alternate history as rich as Faulkner’s Yoknapatawpha County, Mississippi.” — O, The Oprah Magazine

1. What qualities define Thomas Wazhushk? In what ways is he like the muskrat he was named for? What, in addition to the jewel bearing plant, does he watch and guard?

2. In what ways is Rose valuable to Thomas and the rest of her family and community?

3. Watching the stars one night, Thomas is struck by the opposing natures of his first and last names. What do they represent? How is he able to integrate them into an identity or not?

4. Thomas spends much of his work time writing, both official correspondence and personal letters and cards. What is important about writing for him? What is the value of creating such documents?

5. Pixie Paranteau insists that others call her Patrice. Why is this? What’s the difference between the two names for her? In what ways are names important?

6. Patrice likens her meticulous work at the jewel plant to beading with her mother. In what ways is this similar or not? What’s the difference between work and a job?

7. Why does Patrice love to chop firewood? What does it say that she arranges it in a beautiful pattern?

8. What is Zhaanat’s “deep knowledge”? Why has it been important to protect it and her from outside influences such as boarding school?

9. What is it about Zhaanat’s “unusual hands that frightened some people”?

10. Patrice comes to believe that most people treat the concept of God “in a childish way.” What does she mean? Why might such an approach be limiting or problematic? What is her understanding of the “nameless greatness”?

11. How did Vera—who “always wanted to stay where she could see the birches”—fall victim to such horrible experience? Why might such brutal, misogynistic criminal activity be a lesser priority to authorities? What are the similarities and differences between such criminal sexual activity and Patrice’s job as the Waterjack?

12. What is Wood Mountain like? How is it that he is both a fighter and sensitive and kind to women and Vera’s baby? Why don’t more men combine such strength and protective calm?

13. What does Thomas’ father, Biboon, know that most others do not? What might he mean when he says, “Survival is a changing game”?

14. As Thomas reads resolution 108, meant to terminate the Turtle Mountain Band of Chippewa, he’s struck that “the unthinkable was couched in such innocuous dry language.” What is the intent of such language? In what other contexts is plain, dry language used as a power?

15. Consider the many stereotyped images of “a lovely Indian maiden in flowing buckskin” and others in advertising. What is the power and effect of such images? What role do they play in culture?

16. What does it mean that Thomas is of the “after-the-buffalo-who-are-we-now” generation? What might it mean to “define themselves”? What are the various component parts of one’s identity?

17. What is shame? Why is it likened to “a black sediment…carried around in [the] stomach”? What are the causes of shame for Thomas and others? What is the best way to combat it?

18. How is Millie Cloud a part of or estranged from her tribe? How might she balance her valuable pursuit of higher education with a connection to her family and culture?

19. Thomas chooses to view Arthur V. Watkins, the senator behind the termination bill, as an adversary instead of an enemy. What’s the difference? What does Thomas gain by making this distinction?

20. Why is Patrice’s sexual desire “confused with shame”? In what ways are her desires healthy and responsible?

21. Out walking, Patrice falls into a ravine and decides to take a nap near a hibernating bear? What does this mean to her? How does it affect her after the fact? What does it mean that “bigger ideas were called for”?

22. Thomas explains to Barnes that “we are connected to the way-back people.” What does he mean? What is the value of such deep perspective?

23. In what ways are Patrice and Millie “in the same league”?

24. Why might Millie, as she “lovingly” turns the hand crank of the duplicating machine, grow “happier and happier”?

25. What does it mean that patterns take Millie “into the foundations of meaning”? What is the “place simple, savage, ineffable, and exquisite,” that she retreats to each night?

26. What do Roderick’s consistent appearances mean to Thomas? What effect do they have?

27. What is the role and importance of laughter throughout the burdensome struggles of the novel?

28. What explains Patrice becoming “inhabited by a vengeful, roiling, even murderous spirit”? How might this be helpful to her?

29. Consider one of the final images of the novel, Thomas dreaming of muskrats, asking them his name, placing the paper it’s written on in his mouth, and the “bones tipped and staggered, assembling into forms” across the prairies. What do all these powerful images suggest about Thomas and his people?

30. What is important and powerful about Thomas, even occasionally struggling with language, continuing to write at his desk at work?