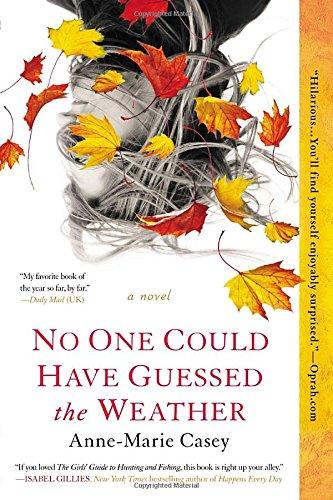 NO ONE COULD HAVE GUESSED THE WEATHER

When Lucy's husband loses his job, she is forced to give up her posh life and move their family to a tiny apartment in Manhattan, where he has managed to secure a lowly position. Lucy soon finds herself living in the epicenter of cool and hip. Across from their apartment is a bar called PDT-when Lucy passes by she thinks, “Please Don't Tell anyone I'm a middle-aged woman.”

Homesick and resentful at first, Lucy soon embarks on the love affair of her life-no,

When Lucy's husband loses his job, she is forced to give up her posh life and move their family to a tiny apartment in Manhattan, where he has managed to secure a lowly position. Lucy soon finds herself living in the epicenter of cool and hip. Across from their apartment is a bar called PDT-when Lucy passes by she thinks, “Please Don't Tell anyone I'm a middle-aged woman.”

Homesick and resentful at first, Lucy soon embarks on the love affair of her life-no, not with her husband (though they're both immensely relieved to discover they do love each other for richer or poorer), but with New York City and the three women she befriends.

There's Julia, who is basically branded with a Scarlett A when she leaves her husband and kids for a mini nervous breakdown and a room of her own; Christy, the trophy wife of a much older successful man, who is a bit adrift as only those who live high up in penthouses can be; and disheveled and harried Robyn, who is constantly compensating for her husband who can't seem to make the transition from wunderkind to adult.

Spot-on observant, laugh-out-loud funny, yet laced with kindness through and through, No One Could Have Guessed the Weather is what happens when you grow up and realize the middle part of your story might just be your beginning.

Anne-Marie Casey was a script editor and producer of prime-time television drama for ten years before becoming a writer full-time. No One Could Have Guessed the Weather, her first book, was inspired by her time living in Manhattan and her love-love relationship with the city. She is married to the novelist Joseph O’Connor. They now live in Dublin, Ireland, with their two sons.

“If you loved The Girls’ Guide to Hunting and Fishing, this book is right up your alley.”—Isabel Gillies, New York Times–bestselling author of Happens Every Day

“A coming-of-middle age story, this first novel is warmly appealing… the ‘I see what you did there’ payoff is sweet.”—Library Journal

Which of the four main characters-Lucy, Julia, Christy, and Robyn-did you most relate to, and why? Did you find a little of each of them in you? Did you learn anything new about yourself while reading about these women?

In the chapter “Surrendered Lives,” Lucy is reminded of a quotation from George Eliot's novel Middlemarch describing the feeling of all ordinary life: the “roar which lies on the other side of silence.” How does this relate to the actions of the four main characters?

In addition to Middlemarch, Anne-Marie Casey refers in the book to two other nineteenth-century novels: Madame Bovary, the tragic story of a woman trapped in an unhappy marriage and an unfulfilling provincial life in France, and The Age of Innocence, a story of the manners and morals of upper-class New Yorkers. Why do you think she does this? What point is she trying to make by linking her book with these classics that examine women in society?

How do you feel about the book's portrayal of female friendships? Do you think Julia and Christy's friendship will survive? How important is friendship among women in today's world?

Robyn is the most active character in the book: she hatches a plan and then follows it through. Did you sympathize with her situation at the beginning? Why does she behave as she does? Is she Machiavellian or just practical? Do any of the other characters really like Robyn? Do you?

A line on the book's jacket says, “Sometimes what you want in your twenties isn't what you want or need in your forties.” Do you think that's true? What did you want when you were younger? And how is that different from what you want and need now that you're older?

What does Lucy's Englishness contribute to the book? How does her “outsider” status affect how she interacts with the other characters? How does it shape how she feels about herself? Does her take on U.S. culture, and women and parenting in particular, differ from that of the other characters because she is foreign?

Julia is the character for whom motherhood and work (her desire and her ambition) create the most conflict. How did you respond to her story? Why does she have to leave New York City at the end?

For a book about four mothers, there's very little discussion of children, or attention paid to them; in fact, “Julia and Christy never mentioned their children unless they absolutely had to.” Why is that? Are they bad mothers?

In her author biography, Anne-Marie Casey says the book was inspired by her experiences living in Manhattan and her “love/love relationship with the city.” In what ways is this evident in her portrayal of New York City? Does it feel like a character to you?

Consider Christy's relationship with Vaughn. Why doesn't she confront him about his mistress? Does she lust after her doorman solely because he's more age-appropriate? Will having another baby make her happy? Do you think it's selfish for someone her age (and Vaughn's) to have a baby?

What did you think of the portrayal of men in the book? How and why do you think Lucy and Richard's marriage changes in the course of the story? Do you agree with Julia that they are the happiest couple she knows?

All of the women confront the next chapter of their lives: “Lucy still found herself considering Is that all there is? and wanted something more, something that was not just about financial independence, though that was certainly a desire that had been reawakened in her, but [that] would give her the confidence to sashay through middle age like Tina Turner, with her skirts hiked above her fantastic legs. Julia encouraged her in this determination. 'What are we all meant to do, Lucy?' she would say. 'Lie down and die? I don't think so.' Lucy didn't think so, either.” Do you think women deal with “mid-life crises” differently from how men do? Why or why not?

Is Lucy's desire to become a writer surprising to you? Do you agree with her idea-which is ultimately the idea of the book-that the ordinary lives of women can and should be the stuff of entertaining yet thought-provoking fiction?