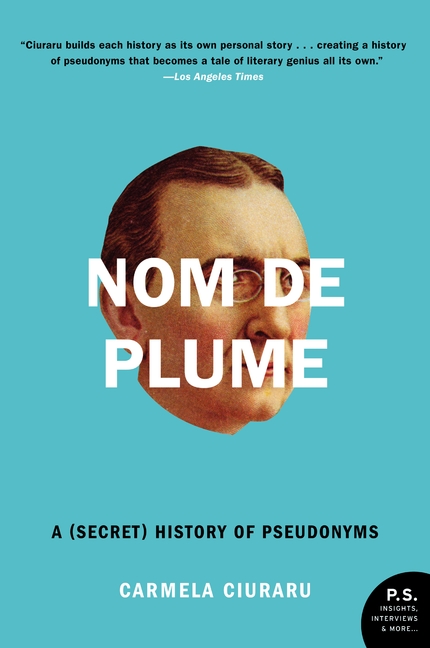 A (Secret) History of Pseudonyms

Exploring the fascinating stories of more than a dozen authorial impostors across several centuries and cultures, Carmela Ciuraru plumbs the creative process and the darker, often crippling aspects of fame.

Only through the protective guise of Lewis Carroll could a shy, half-deaf Victorian mathematician at Oxford feel free to let his imagination run wild. The "three weird sisters" from Yorkshire—the Brontës—produced instant bestsellers that transformed them into literary icons, yet they wrote under the cloak of male authorship. Bored by her aristocratic milieu, a cigar-smoking, cross-dressing baroness rejected the rules of propriety by having sexual liaisons with men and women alike,

Exploring the fascinating stories of more than a dozen authorial impostors across several centuries and cultures, Carmela Ciuraru plumbs the creative process and the darker, often crippling aspects of fame.

Only through the protective guise of Lewis Carroll could a shy, half-deaf Victorian mathematician at Oxford feel free to let his imagination run wild. The "three weird sisters" from Yorkshire—the Brontës—produced instant bestsellers that transformed them into literary icons, yet they wrote under the cloak of male authorship. Bored by her aristocratic milieu, a cigar-smoking, cross-dressing baroness rejected the rules of propriety by having sexual liaisons with men and women alike, publishing novels and plays under the name George Sand. Highly accessible and engaging, these provocative stories reveal the complex motives of writers who harbored secret identities—sometimes playfully, sometimes with terrible anguish and tragic consequences. Part detective story, part exposé, part literary history, Nom de Plume is an absorbing psychological meditation on identity and creativity.

Carmela Ciuraru is not a pseudonym. Her anthologies include First Loves: Poets Introduce the Essential Poems That Captivated and Inspired Them and Solitude Poems. She is a graduate of Columbia University’s School of Journalism and a member of the National Book Critics Circle. She has written for the Los Angeles Times, the San Francisco Chronicle, the Boston Globe, the Wall Street Journal, Newsday, Elle Decor, ARTNews, O, The Oprah Magazine, and other publications. She lives in Brooklyn.

“Nom de Plume is filled with tremendous insight into the minds of these writers and their ability to create not only works of fiction within the covers of their books, but fictional lives for themselves as well….beautifully researched and deftly written-pure pleasure from cover to cover.”—New York Journal of Books

“Carmela Ciuraru’s Nom de Plume deftly tells the stories of some of literature’s most famous pen names. For anyone who creates the book will enthrall. As much a meditation on the creative process as it is a tell-all about their names and the intrigue that created them.”—Associated Press

“Nom de Plume is a fascinating collection of stories—populated by individuals whose ‘doubleness’ is so distinct that they acquire secondary personalities, and, in some notable cases, multiple personalities. It’s a richly documented literary excursion into the inner, secret lives of some of our favorite writers.”—Joyce Carol Oates

“Stories of self-invention are always interesting to read about, especially in Carmela Ciuraru’s Nom de Plume. Ciuraru’s book presents a persuasive argument that the generative powers of the pseudonym should persist.”—The Daily

We are living in an era of made-up memoirs, semi-autobiographical fiction, social media such as Facebook and Twitter, and an ever-increasing number of “reality” TV shows. In a culture in which privacy is constantly being violated, threatened, and exposed, is it still possible to use a pseudonym without being discovered?

Think about some of the most common reasons why authors use pen names. What kind of protection do alter egos give them? Why is it that having a secret identity can prove so seductive?

Write your own name on a sheet of paper. What kind of history does it conjure for you? Do you feel ambivalence toward your name? Do you think your name reflects who you are?

The use of pseudonyms, in the traditional sense, has declined over the past several decades. Why do you think that’s true? What, if anything, does it say about our culture?

Do you think that inhabiting another identity to write—whether fiction or nonfiction—is fundamentally dishonest? Do different rules apply for different genres? Is there an instance in which it’s unacceptable for a writer to use a pen name?

As Isak Dinesen (Karen Blixen) once said, part of the allure of a nom de plume is to avoid answering personal questions, such as: Which part of your novel is drawn from real life? Which character is actually you in disguise? And so on. Do you think that readers have the right to the details of an author’s life, even if the author writes fiction? Are authors obliged to “sell” themselves rather than letting work speak for itself?

How would you distinguish between the contemporary use of fake names online—pretending to be someone you’re not—and the use of a pen name to publish a book? Is there a difference?

The author V. S. Naipual has stated that he always knows when he is reading a novel by a female author. Do any of the works by the pseudonymous female authors in this book (such as Alice Sheldon, who published science fiction as James Tiptree, Jr.) overturn that assumption? If so, how?

To what extent were the authors in this book exploring different personalities through their names? In the case of Samuel Clemens, how did Mark Twain provide a buffer against the darker side of his personal life?

Consider some of the nineteenth-century women writers featured in this book, such as the Brontës, George Sand, and George Eliot. How do you think their novels would have been received if they had not used pen names? What power did they gain by pretending to be men?

As a reader, is it important for you to know about the personal lives of your favorite authors? Why? How does having less (or more) information about an author affect your reading experience, if at all?

Have you ever wanted to use a pseudonym? If so, why? Would a secret identity allow you to write something that you would not otherwise attempt?