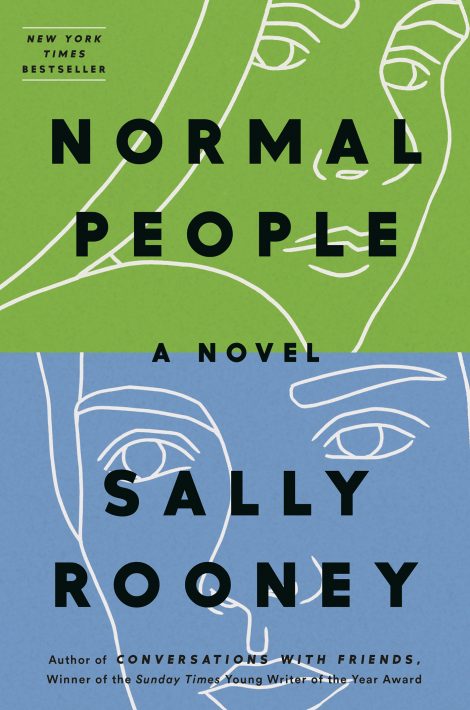 At school Connell and Marianne pretend not to know each other. He’s popular and well-adjusted, star of the school football team, while she is lonely, proud, and intensely private. But when Connell comes to pick his mother up from her job at Marianne’s house, a strange and indelible connection grows between the two teenagers—one they are determined to conceal.

A year later, they’re both studying at Trinity College in Dublin. Marianne has found her feet in a new social world while Connell hangs at the sidelines, shy and uncertain. Throughout their years at university, Marianne and Connell circle one another,

At school Connell and Marianne pretend not to know each other. He’s popular and well-adjusted, star of the school football team, while she is lonely, proud, and intensely private. But when Connell comes to pick his mother up from her job at Marianne’s house, a strange and indelible connection grows between the two teenagers—one they are determined to conceal.

A year later, they’re both studying at Trinity College in Dublin. Marianne has found her feet in a new social world while Connell hangs at the sidelines, shy and uncertain. Throughout their years at university, Marianne and Connell circle one another, straying toward other people and possibilities but always magnetically, irresistibly drawn back together. And as she veers into self-destruction and he begins to search for meaning elsewhere, each must confront how far they are willing to go to save the other.

Sally Rooney brings her brilliant psychological acuity and perfectly spare prose to a story that explores the subtleties of class, the electricity of first love, and the complex entanglements of family and friendship.

Sally Rooney was born in the west of Ireland in 1991. Her work has appeared in The New Yorker, The New York Times, Granta and The London Review of Books. Winner of the Sunday Times Young Writer of the Year Award in 2017, she is the author of Conversations with Friends and the editor of the Irish literary journal The Stinging Fly.

“A stunning novel about the transformative power of relationships” —People

“A master of the literary page-turner” —J. Courtney Sullivan

“Fresh and accessible … There is so much to say about Rooney’s fiction—in my experience, when people who’ve read her meet they tend to peel off into corners to talk.” —Dwight Garner, The New York Times

1. While living at home in Carricklea, Connell’s sense of self is managed by the opinions of his peers in secondary school. To that end, he avoids being publicly seen with Marianne, an outcast in school, fearing how their association might damage his reputation.

Were you critical of Connell for the way he treated Marianne in school, or were you sympathetic toward his adolescent self-consciousness? Do you think he became less concerned by the thoughts of others as he grew older?

2. With Marianne, Connell feels a sense of “total privacy” in which “he could tell her anything about himself, even weird things, and she would never repeat them, he knows that. Being alone with her is like opening a door away from normal life and then closing it behind him” (6–7).

Why do you think Connell is sometimes unnerved by their intense and intimate connection? Further, why do you think he’s unsettled by the sense that Marianne would do anything to please him?

3. The first time Connell tells Marianne he loves her, we are told that “She has never believed herself fit to be loved by any person. But now she has a new life, of which this is the first moment, and even after many years have passed she will still think: Yes, that was it, the beginning of my life” (46).

Do you think Marianne had ever been told that she was loved, in any sense of the word, by anyone before Connell? How can the experience of “first love” transform a person’s self-image and view of the world?

4. In Normal People, Marianne only barely opens up to Connell about her relationship with her family—how her father had been violent when he was alive, how her brother verbally and physically attacks her, and how her mother essentially forbids her to believe that she is “special” in any way.

How does Marianne’s family influence her opinion of herself and affect her relationships with other people? How does she attempt to distance herself from her family? And how does Connell’s upbringing compare and contrast to Marianne’s?

5. When they move from the countryside to attend college in Dublin, there is somewhat of a role reversal between Connell and Marianne. Connell,  once popular in secondary school, is scrutinized and mocked at Trinity College for his fashion sense and thick Galway accent, and he is even called a “milk-drinking culchie” (154). Marianne on the other hand, herself from a wealthy family, moves at ease through an elitist social scene.

How do class dynamics affect Connell and Marianne in Dublin? How do their reactions to class prejudice and snobbery shade your view of them as characters?

6. How would you describe the power that Connell and Marianne hold over each other? Did you notice a power relation shift and evolve between them over the years? How might it have had both positive and negative effects in different moments?

7. Despite being so close, Connell and Marianne sometimes miscommunicate and misinterpret each other. This can be seen when Connell, unable to pay rent in Dublin, moves back to Carricklea to save money during the summer of 2012, after he fails to directly ask Marianne if he can move in with her.

How does the structure ofNormal People, oscillating between the experiences of both characters during this time, reveal the ways in which they misunderstood each other? How do you think their relationship would have turned out differently if Connell had stayed with Marianne that summer?

8. As the narrative progresses, Marianne becomes increasingly submissive in her sexual encounters with other people. Why do you think she is so repulsed by Lukas during “the game” when he tells her that he loves her (203)? Does she try to separate love from sex? Why do you think she later asks Connell if he will hit her during sex, and why does she shut down when he declines?

9. Both Marianne and Connell undergo certain crises of meaning during their later years in college. For instance, Marianne becomes increasingly dissociated from herself and from other people when she is studying in Sweden, and Connell suffers from depression after his friend Rob commits suicide.

Do you think that people are generally more vulnerable to internal crises and mental health issues in their late teens and early twenties? Why or why not? What are the most important support systems and coping mechanisms for someone going through such a difficult time, and do you think that Connell and Marianne find them in Normal People?

10. Connell is disillusioned by the contrived and stale performances he witnesses during a reading at Trinity College Dublin. Consider the following quote:

“It was culture as class performance, literature fetishized for its ability to take educated people on false emotional journeys. . . . All books were ultimately marketed as status symbols, and all writers participated to some degree in this marketing. Presumably this was how the industry made money. Literature, in the way it appeared at these public readings, had no potential as a form of resistance to anything” (228).

Do you agree with this assessment? What kind of “resistance” do you think Connell has in mind? Were you surprised to find such a critique in a recently published book? Do you think that by illuminating prejudices and injustices, as well as commonalities that exist between people, literature might still serve an important social purpose? You might illustrate your answers by pointing to passages from Normal People or by referencing other books that have been released in the past few years.

11. In an interview with The New Yorker, Sally Rooney mentioned that “A lot of critics have noticed that my books are basically nineteenth-century novels dressed up in contemporary clothing.” Would you agree with this comment? How might Normal Peopleand Rooney’s first novel, Conversations with Friends, be compared, structurally and thematically, to nineteenth-century romantic literature?

12. Despite the magnetic attraction that persists between Connell and Marianne, they are never officially “together” in this book. Considering the highs and lows they each go through over the years, do you think that they could have ever had a normatively structured boyfriend-girlfriend relationship? Did reading this novel lead you to question why we tend to put rigid labels on our relationships?

13. At the end of Normal People, when Connell is offered a place in an MFA program in New York, Marianne thinks, “He brought her goodness like a gift and now it belongs to her. Meanwhile his life opens out before him in all directions at once. They’ve done a lot of good for each other. Really, she thinks, really. People can really change one another” (273).

In what ways did you see Marianne and Connell change each other’s lives? How did they find parts of themselves in and through each other? Do you worry about what could happen to Marianne without Connell? Or do you think it might be important for them to spend time apart and grow independently after college?

14. At times, we see that Marianne considers herself intrinsically damaged, unlovable, and “bad.” In other words, she believes that she will never be a normal person.

Having read about their innermost insecurities, feelings of alienation, sexual drives, desires, and so on, do you think that Connell and Marianne are any more or less “normal” than other people? What qualifies a person as normal, and do you think that such a completely normal person can exist?