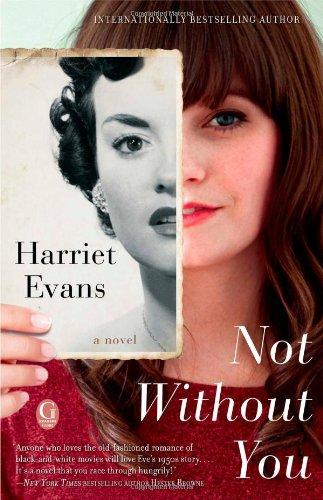 Sophie Leigh’s real name is Sophie Sykes. But she hasn’t been called that for years, not since she became an A-list movie star. Living in Los Angeles, she can forget all about the life she left behind in England. But she’s lost something of herself in the process, too.

Glamorous 1950s starlet Eve Noel had none of Sophie’s modern self-confidence. She didn’t choose her name. A Hollywood producer did. In fact, he made all her decisions—what to wear, when to smile, who to love. Right up until the day she simply vanished from the spotlight. No one knows where she went,

Sophie Leigh’s real name is Sophie Sykes. But she hasn’t been called that for years, not since she became an A-list movie star. Living in Los Angeles, she can forget all about the life she left behind in England. But she’s lost something of herself in the process, too.

Glamorous 1950s starlet Eve Noel had none of Sophie’s modern self-confidence. She didn’t choose her name. A Hollywood producer did. In fact, he made all her decisions—what to wear, when to smile, who to love. Right up until the day she simply vanished from the spotlight. No one knows where she went, or why.

As Sophie’s perfect-on-the-outside world begins to crumble, her present col­lides with Eve’s past. She must unravel the mystery around her idol’s disappear­ance before it’s too late for them both.

Harriet Evans is the internationally bestselling author of Going Home, A Hopeless Romantic, The Love of Her Life, I Remember You, Love Always, and Happily Ever After. She lives in London.

“Oh, I loved Not Without You! I just couldn't stop reading. Anyone who loves the old-fashioned romance of black and white movies, or wishes they could step into the film or behind the Hollywood sound stages, will love Eve's 1950s story; anyone who wonders what it's really like to be modern-day box office royalty will be gripped by Sophie's. Harriet Evans conjures up the glamour, pressures, and euphoria of life as a star, yet she creates two very real heroines treading the precarious tightrope of fame. It's a novel that your ace through hungrily, yet don't want to end, thanks to characters who feel like friends from the first page.”—New York Times bestselling author Hester Browne

“The shallow LA of today is wittily satirized, and the more glamorous age of the 50s brilliantly recalled.”—Sunday Mirror

“This cleverly constructed tale about the interwoven lives of two Hollywood actresses will have you gripped from the very first page. Dripping with dark humour, gritty realism, with a little bit of romance thrown in, too, it's an absorbing read.”—Star

“This is more than your average chic lit. The stories of Sophie and Eve take center stage here, providing a refreshing and absorbing depth and complexity. A fascinating look at the Hollywood machine of past and present and those who have struggled within it.”—Booklist

The prologue begins with Rose telling Eve that elves have left gold coins in the stream, introducing the ideas of imagination and make believe from the very beginning of this story. Where else do you see these ideas threaded through in Eve’s life—in her career choice, her romantic life, her later years? Do you see them echoed in Sophie’s life as well?

On the surface, Eve and Sophie have a lot in common—their English heritage, their beauty, their talent, their glamorous careers, even their house. But there are differences too—in their families, in the romantic lives, in what motivates them. Do you think they’re more alike or more different? Did you identify more with Eve or with Sophie?

How does Eve’s relationship with her largely-absent parents affect her? What about Sophie, with her pushy stage mom, who gave up her own career for Sophie? Which one, in the end, had it better?

Setting plays an important role in the story, with the contrast between sunny, carefree California and the green, rainy English countryside especially pronounced. How do you see the setting affecting the action of the story? What other locations are used in the book, and how do they affect the scenes that take place there?

Sophie finds herself the subject of many ridiculous stories in the tabloids, from Armpitgate to her near-engagement to Patrick, whom she barely knows. How do you see the tabloids manipulating Sophie throughout the story? How do Sophie and the Hollywood machine manipulate them? How was it different in Eve’s day? In the end, is what’s true more important than what the public sees?

On the surface, some of the parts of the story set in Hollywood feel fun and glamorous, almost somewhat superficial, but they actually have a lot to say about the problems women in Hollywood—and women everywhere—have being taken seriously. Where else do you see the author hinting at the idea that women and men don’t always have a level playing field?

What does the book say about Hollywood’s focus on standards for women’s beauty? How does what happens to Eve and Sophie reflect this? How are the characters of Deena, Sara, and Tina affected by it?

After Eve became famous, she admits she “couldn’t remember who I was, what I was supposed to be.” (p. 192) Does her life in Hollywood cause this confusion? Is it something the studio makes her feel intentionally? Do you think this can be read as a judgment about Hollywood?

“I felt as if, every time, I became Rose. I became myself, truly myself.” (p. 219) Throughout the story, Eve and her sister are confused for one another—sometimes on accident, sometimes by their own choice. Eve even refers to Eve and Rose as the two parts of her personality. (p. 366) Why do you think Eve is so willing to be known as her sister? Do you see Eve and Rose’s relationship as sweet, or as something darker?

Eve spends much of the book hiding—behind a false marriage to Gilbert, behind Rose, behind her letters to Don. What is she afraid of? In what ways does her Hollywood career cause this? What else adds to this? Is acting—by its very nature, escaping reality—in some ways the perfect career for her? Why or why not?

Conrad’s homosexuality is treated as a disease, while Rose’s epilepsy is seen as a mental disorder. Even Eve’s post-partum breakdown is treated with electric shock therapy, which causes her to lose parts of her memory. How have attitudes about these conditions changed? In what ways haven’t they? Are there other conditions or situations in the book that seem to be products of their time?

The studios in Eve’s time are shown to be struggling against the new technology of television, as well as from actors and directors—including Gilbert—putting together projects on their own without their help. They seem to be fighting to hold on to a dying system. How else do you see that theme echoed in the book? Do you see parallels to today’s entertainment culture?

“I think I had it coming,” (p. 430) Sophie says of her attack. What does she mean by that? Is there any merit to her claim? How does the attack change her? Do you think Sophie ends up better off after the attack? Why or why not?

Which real-life movie-stars did the characters remind you of? Did they have echoes of any real stars? Which old movies in particular did Eve’s story remind you of, if any?

“What happened next? That’s what you always want to know at the end of a film, right? Do they live happily ever after?” (p. 460) Do you think Eve and Don live happily ever after? What about Sophie and Patrick? Do you think the ending is clear about what happens next for these characters? Why or why not? How does that affect your reading of the story?

***Pick up a couple of tabloid magazines and flip through them together. How are the actors portrayed? Before reading this book, how much of what was printed would you have believed? Has reading this book changed your impression of what the magazines print? Does it matter whether what’s printed is true or not?

There are several excellent biographies of William Shakespeare, including Will in the World by Stephen Greenblatt and Shakespeare: The Biography by Peter Ackroyd. Read one of these, and watch Shakespeare in Love or a movie adaptation of one of his plays. Discuss the various ways in which Shakespeare’s work and life has been used by the movie industry as perennially fresh material. Think about how his plays have transferred to the big screen and what you feel has worked, and have enjoyed as entertainment, and what hasn’t.

While Eve’s movies are fictional, there are many wonderful films that Eve could have starred in and bring Eve’s world to life. Watch a movie from the late 1950s or early 1960s—you might check out one starring Elizabeth Taylor, who beats out Eve for the Oscar in this story—and discuss how it’s different from movies produced today and how you see echoes of this story in it.