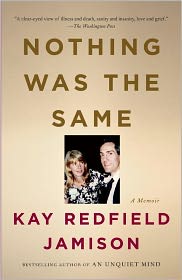 NOTHING WAS THE SAME

From the internationally acclaimed author of An Unquiet Mind, an exquisite, haunting meditation on mortality, grief, and loss.

Perhaps no one but Kay Redfield Jamison—who combines the acute perceptions of a psychologist with a writerly elegance and passion—could bring such a delicate touch to the subject of losing a spouse to cancer. In direct, straightforward, and at times strikingly lyrical prose, Jamison looks back at her relationship with her husband, Richard Wyatt, a renowned scientist who battled debilitating dyslexia to become one of the foremost experts on schizophrenia. And with her characteristic honesty,

From the internationally acclaimed author of An Unquiet Mind, an exquisite, haunting meditation on mortality, grief, and loss.

Perhaps no one but Kay Redfield Jamison—who combines the acute perceptions of a psychologist with a writerly elegance and passion—could bring such a delicate touch to the subject of losing a spouse to cancer. In direct, straightforward, and at times strikingly lyrical prose, Jamison looks back at her relationship with her husband, Richard Wyatt, a renowned scientist who battled debilitating dyslexia to become one of the foremost experts on schizophrenia. And with her characteristic honesty, candor, wit, and simplicity, she describes his death, her own long, difficult struggle with grief, and her efforts to distinguish grief from depression.

But she also recalls the great joy that Richard brought her during the nearly twenty years they had together. Wryly humorous anecdotes mingle with bittersweet memories of a relationship that was passionate and loving—if troubled on occasion by her manic-depressive (bipolar) illness—as Jamison reveals the ways in which her husband encouraged her to write openly about her mental illness and, through his courage and grace taught her to live fully.

A penetrating psychological study of grief viewed from deep inside the experience itself, Nothing Was the Same is also a deeply moving memoir by a superb writer.

Kay Redfield Jamison is Professor of Psychiatry at the Johns Hopkins University School of Medicine and codirector of the Johns Hopkins Mood Disorders Center. She is also Honorary Professor of English at the University of St. Andrews in Scotland. She is the author of the national best sellers An Unquiet Mind and Night Falls Fast, as well as Exuberance and Touched with Fire; the coauthor of the standard medical text on manic-depressive (bipolar) illness; and the author or coauthor of more than one hundred scientific papers about mood disorders, creativity, and psychopharmacology. She is the recipient of numerous national and international scientific awards and of a John D. and Catherine T. MacArthur Fellowship.

“To write the truth with such passion and grace is remarkable enough. To do this in loving memory of a partner is tribute indeed.”—The Washington Post

“This is a finely told midlife love story, a romance as elegant as it is doomed . . . What a couple she and her husband . . . made! . . . Jamison writes simply and believably.”—AARP Magazine

“The great gift Jamison offers here, beyond her honesty and the beauty of her writing, is perspective: a cleared-eyed view of illness and death, sanity and insanity, love and grief . . . To write the truth with such passion and grace is remarkable enough. To do this in loving memory of a partner is tribute indeed.”
—The Washington Post

How does the prologue set the stage for Jamison’s investigation into grief?  What does it convey about the narrative method she has chosen to employ? Does her expertise as a psychologist color her description of her immediate reaction to her husband’s death?

What personality traits contributed to Wyatt’s ability to deal with dyslexia? How did the circumstances of his childhood affect not only his intellectual development but also his ambition and choice of career? Does his experience with dyslexia both as a child and an adult provide insight into learning disabilities and how they are generally perceived?

Jamison writes, “We were temperamentally different in critical respects—his passion for work over people; my intensity and less settled ways—but at the start of our life together it was my manic-depressive (bipolar) illness that created the greatest misunderstanding and discord.”  To what extent does Jamison’s illness determine the nature of their relationship? What are the implications of her saying, “I could live with my mercurial moods, but it was not clear that someone else could, or should”?

What emotional and intellectual factors play a role in Wyatt’s response to Jamison’s illness, as well as his mechanisms for dealing with troubling incidents? What does his decision to keep antipsychotic medication at hand demonstrate about the conflicting pulls of trust and uncertainty in their marriage? Are Jamison’s feelings of betrayal justified? Does Wyatt’s response—“I am imperfect. . . . You are imperfect. . . . Love is imperfect”—define the foundation of successful marriages and relationships?

Jamison writes,  “He kept fastidious notes on everything he could measure. . . . I clearly had become a project to him, one that was useful in figuring out patterns in my illness, as well as creating enough interest to keep his mind engaged.” Do scientists and doctors address serious illnesses differently from non-scientists? What are the benefits to both patient and caregiver of an objective approach like Wyatt’s? Is there a negative side as well?  What, for example, might be the unintended effects of regarding a patient as a “project”?

“My brain, as Richard explained it to himself and to me, was a delicate ecosystem . . . which was kept alive through a finely honed mix of lithium and love and sleep, or as he imagined it, ‘water grasses and dragonflies, and a snail or two to tidy up.’” This is one of several metaphors for illness that appear throughout the book. What does the use of metaphors, analogies, humor (“[Richard] had, as he put it, the fine motor coordination of a clam”), and other devices reflect about the way we deal with disabilities or illness?

Jamison records Wyatt’s physical reaction to chemotherapy and a bone marrow transplant in graphic detail and also describes his emotional state, writing  “he remained imperturbable and wryly engaged with life. . . . He did what I had always known him to do when he was hurt or worried: he turned inward, to his imagination.” How do his experiences compare to that of cancer patients you have known? Why do some patients manage the effects of cancer treatments better than others?

In writing about his impending death, Wyatt says, “Certainly there were many times I did things that hurt others or committed sins of omission, but by my accounting I stayed ahead and feel I am still ahead. For me, not being in debt means I do not have to be concerned about death.” Do you agree with the sentiments he expresses? What other aspects of a person’s life would you add?

What do her trips to California represent to Jamison? In what ways do they reflect her inner journey and her acceptance of the inevitability of Wyatt’s death?

“I realized that it was not that I didn’t want to go on without him. I did. It was just that I didn’t why I wanted to go on. It would have to be an act of faith.” Talk about how memories of Wyatt, the consolations of friends, and Jamison’s ability to imagine “a different way of being together” all help sustain her during the early days after Wyatt’s death. What other resources does she draw upon?

In the chapter that takes its name from Freud’s famous essay, “Mourning and Melancholia,” Jamison explores the things that depression and grief have in common and those they do not.  What do you see as the most salient differences between the feelings of loss suffered in depression and in grief? How do the words of C. S. Lewis, Robert Lowell, Edna St. Vincent Millay, Graham Greene, Tennyson’s In Memoriam, and Freud himself help clarify the ways individuals and society have learned to deal with grief?

Are Wyatt’s and Jamison’s attitudes influenced by their ability to take advantage of medical advice and breakthroughs not available to others? What does their story demonstrate about America’s medical system? What does it reveal about the possibilities, as well as the limitations, of modern medicine?

How much do Jamison’s needs as a wife and a widow affect her descriptions of Wyatt? How does she enhance and expand upon her personal feelings to capture Wyatt as a beloved man and respected professional?

If you have read An Unquiet Mind, in what respects is Nothing Was the Same a sequel? What themes or message emerge in both books? In what ways has Jamison changed in the years since An Unquiet Mind and what accounts for those changes?

The book’s title comes from the poem by Stuart MacGregor that appears at the beginning of the book. What images and allusions in the poem make it particularly apposite to the story Jamison tells?

Does Nothing Was the Same transcend Jamison’s personal story to illuminate the universal experience of grief? What practical guidance and emotional insights does the book offer to readers?