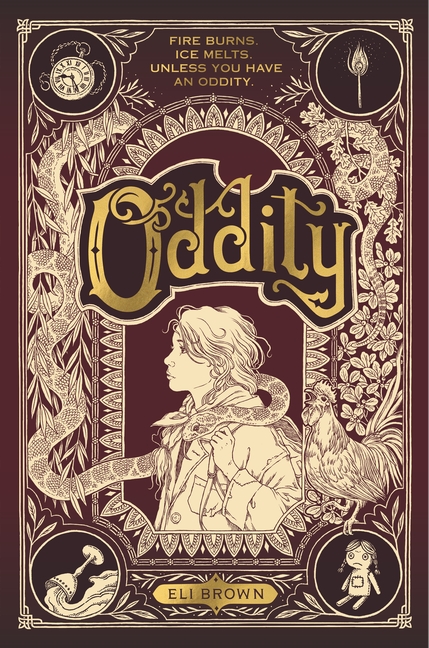 It’s the early 1800s, and Clover travels the impoverished borderlands of the Unified States with her father, a physician. See to the body before you, he teaches her, but Clover can’t help becoming distracted by bigger things, including the coming war between the US and France, ignited by a failed Louisiana Purchase, and the terrifying vermin, cobbled together from dead animals and spare parts, who patrol the woods. Most of all, she is consumed with interest for Oddities, ordinary objects with extraordinary abilities, such as a Teapot that makes endless amounts of tea and an Ice Hook that freezes everything it touches.

It’s the early 1800s, and Clover travels the impoverished borderlands of the Unified States with her father, a physician. See to the body before you, he teaches her, but Clover can’t help becoming distracted by bigger things, including the coming war between the US and France, ignited by a failed Louisiana Purchase, and the terrifying vermin, cobbled together from dead animals and spare parts, who patrol the woods. Most of all, she is consumed with interest for Oddities, ordinary objects with extraordinary abilities, such as a Teapot that makes endless amounts of tea and an Ice Hook that freezes everything it touches. Clover’s father has always disapproved of Oddities, but when he is murdered, Clover embarks on a perilous mission to protect the one secret Oddity he left behind. And as she uncovers the truth about her parents and her past, Clover emerges as a powerful agent of history. Here is an action-filled American fantasy of alternate history to rival the great British fantasies in ideas and scope.

The daughter of a murdered physician vows to protect the magical Oddity he left behind in an alternate nineteenth century where a failed Louisiana Purchase has locked a young Unified States into conflict with France. 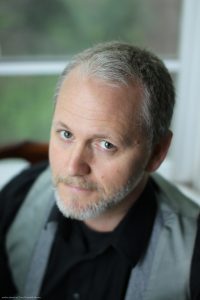 As a child, Eli Brown thought he would have definitely befriended a sasquatch by now. His most recent novel, Cinnamon and Gunpowder, about a chef kidnapped by pirates, was a finalist for the California Book Award, a San Francisco Public Library One City One Book selection, and an NPR Book Concierge Great Read selection. Eli Brown lives with his family in California, where the squirrels bury acorns in his garden and the cats bury worse.

Karin Rytter (Illustrator) is a Scandinavian printmaker, illustrator, and mom of identical triplet toddlers. Her recent work has been in linocut printmaking, a form of relief printing that has a striking graphic style.

“Reads like a richly imagined blend of Lloyd Alexander’s The Black Cauldron and Philip Pullman’s The Golden Compass, and it is fueled by Clover’s desire to better understand her family’s past and so herself. Matches that stop time, an evil witch, and a talking rooster are but a few of the wonders Brown has in store for his readers.” – Booklist

“From a dizzying allotment of intriguing pieces, Brown builds a strongly woven alt-history fantasy adventure that is equal parts violence and resilience, desperation and hope, with occasional doses of the grotesque. Clover makes for an admirable heroine, who builds strength through adversity and friendships through kindness. The richness of the imagined world shines through, a strength reinforced by detailed woodcut-style illustrations and a glossary of notable oddities at novel’s end.” – Bulletin of the Center for Children’s Books

“In an alternate 1822, the uneasy peace between America, the French-controlled Louisiana Territory, and the fictional Sehanna Confederation is on the verge of collapse….Carefully constructed settings, such as an intoxicating marsh derived from an endlessly refilling wine cup and the oddities at the tale’s center—a perpetually freezing ice hook, time-stopping matches—mix the mundane and the impossible, driving a memorable adventure studded with light historical references and Rytter’s woodcut-style illustrations.” – Publishers Weekly

“A thrillingly original fusion of adventure, magic, and epic alternate history, Oddity zings with storytelling panache. Peopled by rich, strange, and delightful characters—both human and eerily otherwise—and featuring a superb heroine, it is inexhaustibly inventive, pouring forth new wonders with the marvelous ease of the magical Wineglass that never runs dry.” – Jonathan Stroud, author of the Lockwood & Co. series and the Bartimaeus Sequence

1. The “Louisiana War” is mentioned early in the book, on page 9. Did you think this was a real war? Did you associate it with the Louisiana Purchase? This kind of writing is called “alternate history” and imagines a different past from the one that actually occurred. How would the US be different if the Louisiana Purchase had never occurred?

2. Clover has always wanted to know more about her mother—what she knew about oddities, what she did in her life, and how she died—but her father refused to tell her. Do you think he was right to withhold this information from her? Would you have wanted to know as a child?

3. Constantine, Clover’s father, tells her that he kept only one oddity and that it is neobkhodimyy, which means necessary. She knows that he uses that word “only for things that really mattered. A heart was neobkhodimyy. An eye, a hand, even a kidney were not” (pages 14–15). When he is about to die, he presses his medical bag against Clover and tells her that it holds hope and that she must keep it safe. What did you think the oddity was?

4. The second oddity that Clover encounters is a rooster, known by the name of Colonel Hannibal Furlong. He is a rare “living oddity” and a military genius. Why do you think the author chose a rooster for this character? What would you have chosen?

5. “The Seamstress” is a seemingly nonthreatening nickname for the evil witch who is feared by all. She got the name because of her ability to animate dead creatures with inanimate objects and her magic thread. What do you think of these evil creatures, the vermin? What makes them scary? Why did the Seamstress create them?

6. Clover and Nessa are young women of about the same age. How are they similar? How are they different? Which one did you identify with more? Which one would you like to have for a friend, and why?

7. When Clover finds Mr. Agate, he is surrounded by boxes and packing up his oddities, preparing to flee. Clover absentmindedly opens one of the boxes, unwittingly letting out a doll who can wreak havoc. When Mr. Agate finally gets her back into her box, he tells Clover, “Susanna will not be played with” (page 106). That is not the only time that Clover encounters Susanna, nor is it the only time that Susanna brings about chaos. How and why do Susanna’s personality and purpose change throughout the book?

9. Constantine and Miniver, Clover’s parents, had very different ideas about how to do the most good. Constantine, the doctor, treats patients one by one, using the tools and knowledge that he has acquired, while Miniver looks at the bigger picture and dares to use magic to bring about change. She says, “How many elections, how many abolitionist meetings, how many clinics have we seen, and still: war, plague, slavery, corruption! And at the end, grinning death waiting to swallow all. Why should the innocent suffer generation after generation when we have the tools to change it?” (page 305) Which line of thinking would you follow?