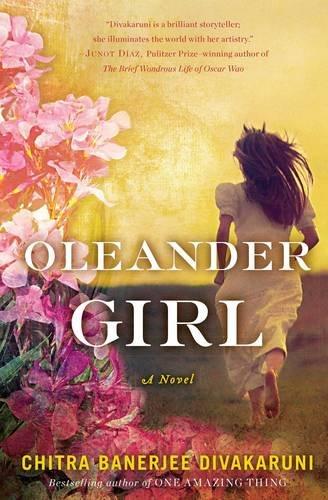 Beloved bestselling author Chitra Banerjee Divakaruni has been hailed by Abraham Verghese as a “gifted storyteller” and byPeople magazine as a “skilled cartographer of the heart.” Now, Divakaruni returns with her most gripping novel yet, a sweeping, suspenseful coming-of-age tale about a young woman who leaves India for America on a search that will transform her life.

Though she was orphaned at birth, the wild and headstrong Korobi Roy has enjoyed a privileged childhood with her adoring grandparents, spending her first seventeen years sheltered in a beautiful, crumbling old mansion in Kolkata. But despite all that her grandparents have done for her,

Beloved bestselling author Chitra Banerjee Divakaruni has been hailed by Abraham Verghese as a “gifted storyteller” and byPeople magazine as a “skilled cartographer of the heart.” Now, Divakaruni returns with her most gripping novel yet, a sweeping, suspenseful coming-of-age tale about a young woman who leaves India for America on a search that will transform her life.

Though she was orphaned at birth, the wild and headstrong Korobi Roy has enjoyed a privileged childhood with her adoring grandparents, spending her first seventeen years sheltered in a beautiful, crumbling old mansion in Kolkata. But despite all that her grandparents have done for her, she is troubled by the silence that surrounds the circumstances of her parents’ death and clings fiercely to her only inheritance from them: the love note she found, years ago, hidden in a book of poetry that had belonged to her mother. As she grows, Korobi dreams of one day finding a love as powerful as her parents’, and it seems her wish has finally come true when she meets the charming Rajat, the only son of a high-profile business family.

Shortly after their engagement, however, a sudden heart attack kills Korobi’s grandfather, revealing serious financial problems and a devastating secret about Korobi’s past. Shattered by this discovery and by her grandparents’ betrayal, Korobi decides to undertake a courageous search across post-9/11 America to find her true identity. Her dramatic, often startling journey will ultimately thrust her into the most difficult decision of her life.

With flawless narrative instinct and a boundless sympathy for her irrepressible characters, in Oleander Girl Divakaruni brings us a perfect treat of a novel— moving, wise, and unforgettable. As The Wall Street Journal raves, “Divakaruni emphasizes the cathartic force of storytelling with sumptuous prose. . . . She defies categorization.”

Chitra Banerjee Divakaruni is the award-winning author of many books, including The Mistress of Spices, Sister of My Heart, and One Amazing Thing. Her work has appeared in The New Yorker, The Atlantic Monthly, and The New York Times. Born in India, she currently lives in Texas and teaches in the nationally ranked Creative Writing program at the University of Houston.

“Gorgeous. . . [An] elegant and highly evocative new novel from Divakaruni.”—PopMatters.com

“With the barest touch of magical realism, Oleander Girl whisks the reader into the layered intricacies of love affairs, family, Indian social class, racial prejudice and religious tension. . . . [Divakaruni] delivers an absorbing modern fairy tale about an orphan in search of the messy truths of family and love.”—San Antonio Express News

“Emotionally compelling. . . . Oleander Girl . . . weaves together many realizations–social and personal. It’s a book that allows you to debate the place of pure emotion as a driving force in life. . . . Divakaruni brings up the generation gap, . . . social status, personal loyalty, Indian mindsets and American realities (ongoing subjects of inquiry in many of her former novels) and serves them with just enough sugar and spice to keep her reader liking the fare.”—Live Mint

“Divakaruni is a poet as well as a novelist–a fact on display in this mystery, which unfolds like a time-lapsed lotus. . . . [She] weaves the issues of the caste system, Hindu and Muslim differences, modern Indian women balancing love and duty, and prejudice into the fabric of her story. It’s the smell and feel of Kolkata that resonates long after the book is finished.”—BUST magazine

Tradition and modernity both play significant roles in the novel, and often collide. For example, the Roy family values cultural heritage and traditional religion, while the Boses are more modern and think highly of new entrepreneurial endeavors. The engagement of Korobi and Rajat brings these two families together. How do the family members feel about the union? What do they agree or disagree about? Find other examples of this kind of conflict in the novel and discuss how characters handle the clash between the old and the new.

In spite of India’s advancement into modern society, an age-old class system is still very present in Indian culture. Both families are wealthy enough to have many servants, and we hear from Asif, the Bose’s chauffeur, often. After Asif’s “six years of chauffeuring the rich and callous he has realized that to them servants are invisible. Until they make a mistake, that is.” (p. 11) Discuss the servants’ dynamics with each other and with and their families or bosses throughout the novel. For example, how does the dynamic between the Boses and their servants differ from the Sheikh and his servants?

There are many couples in the novel, and we see these partnerships from various perspectives. Compare and contrast the way each couple functions together: Mr. and Mrs. Bose, Sarojini and Bimal, Rajat and Korobi, and Mitra and Seema. What are the strengths and weaknesses of each partnership? What makes some of them endure while others fall apart when plunged into adversity?

At Bimal’s insistence, Anu and Sarojini make promises to the goddess at their family temple. Both women take these promises very seriously, and keep them with much difficulty. What exactly are these promises? And why do both women keep their promises despite their consciences telling them otherwise? What are the ramifications of keeping the promises?

Many of the characters do things out of duty to their families or their religion, but there are exceptions to this sense of responsibility. Even though Anu technically keeps her promise to Bimal not to marry, she still “had chosen love over duty.” (p. 67) What are other examples of characters making such a choice? Do duty and love ever coincide in the novel?

Right before Korobi leaves for the United States she chastises herself for not noticing her grandmother enough, and thinks: “If I come back…I’ll do it differently. Then I was shocked. If I come back. Where had that come from?” (p. 103) Why do you think Korobi unconsciously uses the word ‘if’ instead of ‘when’?

Religion is central to the lives of many of the characters in Oleander Girl. Conflicts between Hindus and Muslims plague India and its inhabitants throughout the novel. The discord at the Boses’ warehouse is brought on by the ongoing religious tension in India. Within the warehouse the workers—both Muslims and Hindus—have always worked side by side, but a news bulletin on the radio sparks a violent fight between the men. Find other moments in the text when religious conflict instigates or exacerbates confrontations between characters. Are there instances when a different kind of attitude toward religion brings characters closer to each other?

When Korobi travels to the United States, she experiences a kind of prejudice that is completely different from anything she has known in India. At the airport in New York, on the way to San Francisco, Korobi comments that many of the people pulled out of line for security checks are Indian. In response her companion Vic says, “Welcome to flying while brown in post-9/11 America.” (p. 210) Korobi is indignant at the discrimination; Vic is not bothered by it. Discuss the similarities and differences of prejudice in the United States and in India.

Korobi travels from her house in Kolkata to New York City and Berkeley before returning to India. Each place she goes holds a unique significance for her. Find a description of each setting in the novel and discuss what that place signifies for a certain character. Consider the Roy house and temple, New York City, Boston, Berkeley, Kolkata, the Bose’s warehouse and their gallery, and the Mumtaz gallery in New York.

The story of Oleander Girl is narrated from changing perspectives, and each narrator brings different eyes to every situation. How does this style of writing affect your reading experience? Find a passage from each narrator and discuss how his or her voice reveals new insights to the reader about the story or the characters.

Korobi thinks that Mitra and Seema will be her allies in America; instead she finds Mitra suspicious and unhelpful, and Seema lonely and scared. How did this once successful couple descend into their misery? Seema tells Korobi that after 9/11 “many South Asian businesses were boycotted, especially those with Muslim names. Others were attacked.” (p. 117) Discuss how 9/11 traumatized and terrorized the city even after the attacks. How is Korobi affected by the tragedy?

Near the end of the book, Korobi learns the meaning behind her name: “Because the oleander was beautiful—but also tough. It knew how to protect itself from predators. Anu wanted that toughness for you because she didn’t have enough of it in herself.” (p. 289) Does Korobi live up to her name in the story? Find examples in the text to support your answer.

At Korobi and Rajat’s lavish engagement party, Mrs. Bose recalls the unpleasant circumstances of her own union. Mr. Bose’s father “was furious that his son had chosen—no had been entrapped by—a girl so far beneath their station…” (p. 34) How do you explain Mrs. Bose’s reaction to Korobi’s shocking secret in light of her experience with Mr. Bose’s father? How do the other characters react?

While Korobi is in the United States, Rajat, Pia,, and Asif are injured in a car accident. Why does Asif sacrifice his safety to help Rajat and Pia, even after Rajat rudely truncates Pia’s chat with Asif in the parking lot? Discuss if the incident had any positive effects for the characters.

At a crucial point in her life, Korobi is given a piece of advice: “…never choose something because it’s easier.” (p. 289) How does Korobi apply this advice to her life decisions? What is your opinion of this statement?