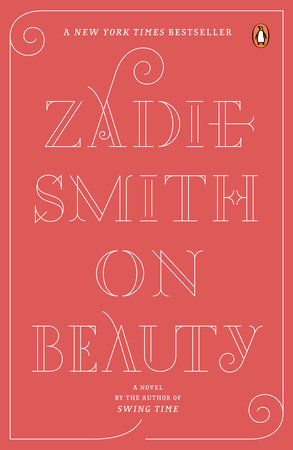 On Beauty, Zadie Smith’s third novel, is both a tribute to and a riff on English novelist E. M. Forster’s Howards End, updated as an exploration of the politics of contemporary life. In a book as bold and funny as it is precise and insightful, Smith applies her dazzling powers of description to a middle-class family in the United States. The Belseys are based at a fictional college called Wellington, where earthy African American Kiki, abstract—and English—Howard, and their three searching children seem the picture of modern liberal success. Yet in spite of their outward harmony and privilege,

On Beauty, Zadie Smith’s third novel, is both a tribute to and a riff on English novelist E. M. Forster’s Howards End, updated as an exploration of the politics of contemporary life. In a book as bold and funny as it is precise and insightful, Smith applies her dazzling powers of description to a middle-class family in the United States. The Belseys are based at a fictional college called Wellington, where earthy African American Kiki, abstract—and English—Howard, and their three searching children seem the picture of modern liberal success. Yet in spite of their outward harmony and privilege, all are eagerly pursuing private agendas. Jerome, the eldest child, is alienated from his secular and liberal family by his conversion to Christianity and attraction to conservatism. Zora, the only daughter, aggressively follows her father’s path, attending Wellington where she adopts a veneer of sophistication and maturity that disguises her insecure heart. The youngest, Levi, longing for an authentic “blackness,” is absorbed into a countercultural identity that belies his class status.

The novel unfolds through a series of unexpected disruptions to the Belsey’s idyllic life. First comes the arrival in town of the Kippses, led by Monty, Howard’s bitter rival in theory and politics. Kipps and his family are, on paper, the Belseys’ opposites: the polished men epitomize a conservative ethic while the decorative women are expected to follow traditional gender roles. Yet the mothers, Carlene and Kiki, form a bond as wives of willful men and as lovers of beauty, a bond that disturbs the balance of distrust between the two families. Additional troubles add to the fray: Howard and Kiki’s marriage is in danger; Jerome falls deeply in love with Monty Kipps’s daughter Victoria; an educated young spoken-word artist enters the Wellington world and Zora’s life; recent immigrants from Haiti transform Levi; and at Wellington Monty Kipps and Howard are on a collision course that threatens Howard’s hard-won status. In these conflicts Smith considers the impact of lies, the humiliation of unrequited love, and the battle between the will of the mind and the desires of the body as each member of the Belsey family questions their previous assumptions about family, race, and morality.

On Beauty is a hilarious, scathing, and emotionally profound novel of human aspiration and failure, an unfailingly perceptive portrait of a struggling marriage, and an empathetic depiction of adolescent struggle. It is also an outsider’s witty look at American cultural life floundering under the weight of political and cultural divisions. Will Howard and Kiki’s marriage survive? How will the feud between Howard and Monty be resolved? Which of the Belsey children are poised to find a true and lasting identity, and which are teetering toward heartbreak? Who will find their true place, and will it be found in family or home, in nationality, abstract theory, or religion? This is Zadie Smith on beauty—exploring who possesses it and who longs for it, who embraces it and who denies it, who exploits it and who is destroyed by it—in a novel both entertaining and wise that consolidates her position as one of the most spellbinding writers of her generation.

Zadie Smith was born in Northwest London in 1975 and still lives in the area. She is the author of NW, White Teeth and The Autograph Man.

“A thoroughly original tale . . . wonderfully engaging, wonderfully observed . . . That rare thing: a novel that is as affecting as it is entertaining, as provocative as it is humane.”—Michiko Kakutani, The New York Times

“A thing of beauty. Oh happy day when a writer as gifted as Zadie Smith fulfills her early promise with a novel as accomplished, substantive and penetrating as On Beauty.”—Los Angeles Times

“Smith’s specialty is her ability to render the new world, in its vibrant multiculturalism, with a kind of dancing, daring joy. . . . Her plots and people sing with life. . . . One of the best of the year, a splendid treat. “—Chicago Tribune

“Short-listed for [the 2005] Man Booker Prize, On Beauty is a rollicking satire . . . a tremendously good read.”—San Francisco Chronicle

1. At the start of the novel, Howard’s betrayal of Kiki has already set the family reeling off its orbit. What are the effects of his infidelity on the children? How do they react and whom do they side with? He and Kiki interpret the meaning of his act differently? Can you understand both sides? Why do you think Howard is tempted toward sexual betrayal? Where do you imagine their relationship is heading at the end?

2. The Belsey children are all searching for an adult identity. Jerome has become religious, Zora is imitating her father, and Levi is in search of what he believes will be an authentic ethnicity. What characteristics do the three children share, and how are they like their parents? Which of their current activities do you see as “phases” in their lives, and which do you think are meant to suggest what they will harden into as adults? Which of them do you identify with the most?

3. The Belseys’ house, beautifully evoked by Smith as the calm center around which the whirlwind of family life turns, embodies the family’s comfortable middle class stature. What does the home represent, both practically and emotionally, to various members of the family? Think about some of the other living spaces in the book—the Kippses’ or Howard’s father’s—and compare them to the Belseys’. What do you think a good house can provide?

4. Kiki, the most grounded of the characters on the surface, is also struggling to find a place. Her husband and children have embarked on paths different from her own, and she feels alienated by Wellington and Howard’s colleagues there. How do people treat Kiki, and what do both her race and size have to do with this? She says at one point that she gave up her life for Howard; what does she mean by this? Do you think she is more empowered over the course of the novel, or less?

5. Howard’s academic work is a deconstruction of traditional ideas of genius; he is attempting a book on Rembrandt that is meant to deflate the myth of his originality. His friend Erskine says that “only a man who had such pleasure at home could be . . . so against pleasure in his work.” Why do you think that Howard feels so antagonistic toward representational beauty in art? What does this suggest about the rest of his life? Do you find his ideas interesting or persuasive? Or do you think he is missing something crucial about art or life? What does his visit to his father add to your understanding of him?

6. Smith quotes Elaine Scarry saying that “a university is among the precious things that can be destroyed.” How would you describe Wellington University; as precious, or something else? What about it as an educational institution is appealing, for the characters or for you? Which of its practices or people does Smith seem critical of? Consider how this college might be representative of both virtues and failings in American culture. How might a university be precious—or beautiful—and how might this be threatened?

7. The opposition between liberal and conservative seems to be encapsulated in the competing ethics of the Belseys and the Kippses. Yet, for the children as well as for the adults, the lived reality turns out to be somewhat more complex. Consider the various members of the two families. How would you describe each one’s politics or belief system? How do they struggle to fully act on those beliefs in their daily lives? Does anyone really live true to their ideals?

8. Women’s body issues recur throughout the novel; as Kiki says, “It was in the air . . . this hatred of women and their bodies.” Kiki finds herself too fat, while fading Carlene is too thin; eighteen-year old Vee wildly explores her newly blossomed figure, while the poet Clare seems infantilized in her childlike body. Are their bodies at all accurate representations of who they are? How do they struggle with, or come to terms with, their physical selves? How does someone like Zora, with dueling models Kiki and Clare, feel about her body? Does anyone have a healthy (and sustainable) physical regard for themselves? Why or why not?

9. The brief friendship between Carlene and Kiki creates a strange but profound connection between the two families, despite the dueling patriarchs. What does Carlene provide for Kiki that her own family does not, and vice versa? Return to their few brief encounters and examine the effect that they have on each other. How does the subject of art and beauty enter into their conversations and thoughts? Do these small moments explain to you why Carlene makes her bequest to Kiki? What is she communicating through that gesture?

10. Some people have described Smith’s writing as satire—that is, work that exposes human folly, offering it up for ridicule. Do you think her depictions of characters are satirical? Some more than others? Think over times in the novel when you feel that characters have become ridiculous, or when they seem more like caricatures than real people. Which characters or moments in the book transcend such stereotype? Are there characters who are both ridiculous and real?

11. All of the character’s lives change over the course of the novel—most dramatically, neither the Belseys nor the Kippses retain the same family structure. Whose life is transformed for the better by these changes and who do you feel are still struggling? Who, in the end, finds peace, and by what means? Try to describe this peace or any other satisfactions you think the characters have attained. What are some conclusions that are arrived at concerning art, home, or love? Think about Howard and Kiki’s divergent paths, or the possible futures of Zora, Jerome, or Vee. Whose position would you most like to be in?

12. The title On Beauty refers to many things: Howard’s theories about art; Kiki’s physical grandeur; the attractiveness of youths like Carl and Victoria; paintings by Rembrandt and other artists; Levi’s sense of the organic flow of street life; Zora’s frustration at her lack of sex appeal; Jerome’s sense of religious transcendence. All of these characters express radically different ideas about the meaning and role of beauty in their lives. What do you think it means, in this novel’s terms, to embrace beauty? What does it mean to be without it? What, to Smith and to you, are truly beautiful things?