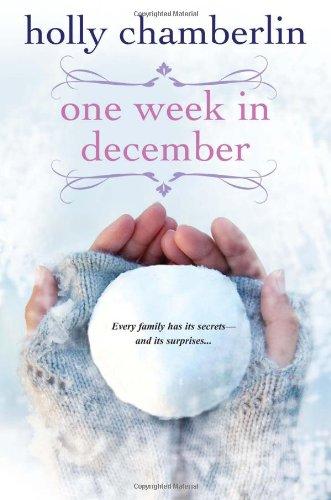 ONE WEEK IN DECEMBER

In this compelling, heartfelt novel from the bestselling author of Tuscan Holiday and The Friends We Keep, a family reunited for the holidays explores the price of secrets, the power of regret, and the choices that can change everything…

The Rowans’ rambling Maine farmhouse is just big enough to contain the family members gathered there in the week before Christmas. Becca Rowan has driven north from Boston with one thought in mind—reclaiming the daughter she gave up when she was a frightened teenager. Raised by Becca’s older brother and his wife,

In this compelling, heartfelt novel from the bestselling author of Tuscan Holiday and The Friends We Keep, a family reunited for the holidays explores the price of secrets, the power of regret, and the choices that can change everything…

The Rowans’ rambling Maine farmhouse is just big enough to contain the family members gathered there in the week before Christmas. Becca Rowan has driven north from Boston with one thought in mind—reclaiming the daughter she gave up when she was a frightened teenager. Raised by Becca’s older brother and his wife, Rain Rowan, now sixteen, has no idea she was adopted. As though Becca agreed not to reveal the truth until Rain turned twenty-one, lately that promise, along with all her career success, counts for little in the face of her loneliness and longing.

While Becca anticipates shock at her announcement, she’s unprepared for the depth of her family’s reactions. Her brother is angry and fearful of losing the daughter he adores; her sister Olivia, oblivious to her crumbling marriage, reveals long-buried resentments, while Becca’s parents are torn between concern and guilt. And as the Rowans’ neighbor, Alex, draws her deeper into an unexpected friendship, Becca begins to challenge her own preconceptions about family, about love, and about the courage needed to live with—and sometimes change—the decisions we make.

Holly Chamberlin is a native New Yorker, but she now lives in Maine—the aftermath of stumbling across Mr. Right at the one moment she wasn’t watching the terrain. She’s been writing and editing – poetry, children’s fantasies, a romance novel or two, among many other genres and projects – her entire life. She has two cats, Jack and Betty, and when she’s not writing, her hobbies include reading, shopping and cocktails at six.

Praise for Holly Chamberlin and The Friends We Keep

Thinking about her husband’s affair and about the human appetite for gossip and rumor, Nora posits that “No relationship was entirely private.” Do you agree with her assessment?

From her vantage point of almost ninety years, Nora believes that “The young thought they were noble, but nobody untested can be noble…. To forgive in the wake of betrayal, that was nobility.” Do you agree that nobility—wisdom, wise action, and selfless behavior—comes only (though not necessarily) with age?

In a similar vein, listening to her granddaughter Lily’s condemnation of her grandfather’s affair, Nora reflects on “the rigidity of the young.” She believes that “the concept of compromise was one that only came to a person with the accumulation of experience.” Do you agree?

Olivia argues that “objects have meaning beyond their physical presence or their usefulness or their monetary value.” Her mother, Julie, argues against this notion and claims that too often objects seem to own people. Are both women right, to some extent? Discuss.

Becca states you can’t hold someone to their word if it was given under pressure. Discuss this in general (what does “pressure” mean in various contexts?) and in terms of Becca’s own situation as a pregnant sixteen-year-old. For example, she claims to have been coerced into giving her baby to David and Naomi; David argues she was counseled.

Discuss Becca’s shame and guilt over not having bonded immediately with her baby. How do societal expectations act unfairly on women at various stages of their lives?

Lily wonders if it’s possible to live a perfectly honest and open life. “If guilt was possible, then why couldn’t innocence be possible, too?” Later, she wonders: “Was everybody doomed to dissemble?” Is Lily simply naïve, or does her belief in the possibility of a life of honesty hold some merit?

Lily thinks about secrets and the various motives behind them. Do you believe that some secrets—perhaps the sort found in this novel—should be kept and others broken? Why? In what circumstances?

Olivia declares: “Without our memories we’re nothing.” What does she mean by this? What might a person less obsessed with history understand by this statement?

Early on in the novel, Becca reminds herself: “Sentimentality was as dangerous as its troublemaking cohort, nostalgia.” Do you agree with her wariness regarding these two emotional states?

When Olivia tells her husband that she was too busy to write his Christmas letter, he claims to be more hurt that she chose to ignore a cherished ritual than if she had simply forgotten to write the letter. Do you understand and agree with James’s position?

In Alex’s opinion, a person who allows a past sadness to continue to color his present displays a lack of imagination. Discuss what Alex means when he talks about emotional creativity and its relation to happiness.

Becca repeatedly says that she wants to “claim” or “reclaim” her daughter. At one point, Naomi argues against the choice of those terms. She finds them in some way demeaning of Rain’s full status as an individual. Do you agree with Naomi’s interpretation of Becca’s word choice?

In your opinion, what is the most important stimulus behind Becca’s seemingly abrupt decision to finally talk with her father and begin the healing process between them?