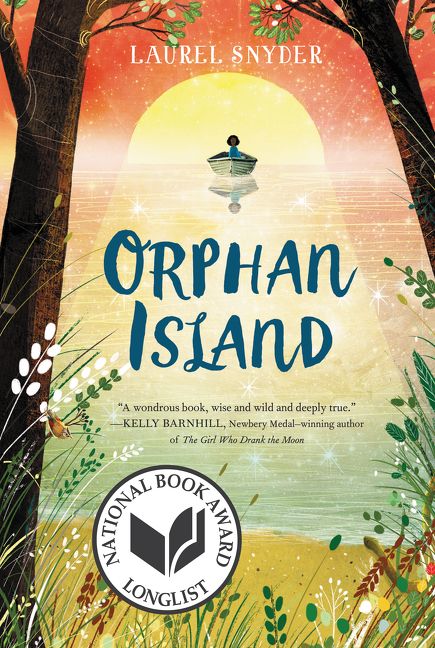 In the tradition of modern-day classics like Sara Pennypacker’s Pax and Lois Lowry’s The Giver comes a deep, compelling, heartbreaking, and completely one-of-a-kind novel about nine children who live on a mysterious island.

On the island, everything is perfect. The sun rises in a sky filled with dancing shapes; the wind, water, and trees shelter and protect those who live there; when the nine children go to sleep in their cabins, it is with full stomachs and joy in their hearts.

And only one thing ever changes: on that day, each year,

In the tradition of modern-day classics like Sara Pennypacker’s Pax and Lois Lowry’s The Giver comes a deep, compelling, heartbreaking, and completely one-of-a-kind novel about nine children who live on a mysterious island.

On the island, everything is perfect. The sun rises in a sky filled with dancing shapes; the wind, water, and trees shelter and protect those who live there; when the nine children go to sleep in their cabins, it is with full stomachs and joy in their hearts.

And only one thing ever changes: on that day, each year, when a boat appears from the mist upon the ocean carrying one young child to join them—and taking the eldest one away, never to be seen again.

Today’s Changing is no different. The boat arrives, taking away Jinny’s best friend, Deen, replacing him with a new little girl named Ess, and leaving Jinny as the new Elder. Jinny knows her responsibility now—to teach Ess everything she needs to know about the island, to keep things as they’ve always been.

But will she be ready for the inevitable day when the boat will come back—and take her away forever from the only home she’s known?

Laurel Snyder is the author of picture books and novels for children, including National Book Award nominee Orphan Island and the Theodor Seuss Geisel Award winner Charlie & Mouse. A graduate of the Iowa Writers’ Workshop, she currently teaches in Hamline University’s MFA in Writing for Children and Young Adults program. She lives in Atlanta with her family.

“Through the precocious Jinny, Snyder delivers a contemplative commentary on the transition from childhood to adolescence, and from ignorance to awareness.” – Publishers Weekly (starred review)

“Laurel Snyder has written a story that curls around the heart and pulls in tight—a meditation on the power and wisdom and closeness and sorrow of childhood. A wondrous book, wise and wild and deeply true. I loved every second of it.” – Kelly Barnhill, Newbery Medal-winning author of The Girl Who Drank the Moon

“An elegant and thoughtful meditation on the joys and sorrows of growing up, with lyrical prose, characters that feel as alive as your dearest friends, and a vivid setting sure to enchant young readers. A work of extraordinary heart.” – Claire Legrand, author of Some Kind of Happiness

“A visionary, poignant, astonishingly lovely fable of childhood and change. This is a book to lose yourself in, and to never forget.” – Anne Ursu, author of The Real Boy

Jinny heard the bell. She threw down her book, rose from the stale comfort of the old brown sofa, and scrambled for the door. When she burst from the cabin into the evening air, Jinny ran.

Along the beach, everyone was running—bolting for the cove, summoned by the golden clatter of the bell, so bright in the dusk. Eight kids, sprinting from the fire circle or the outdoor kitchen, emerging from their cabins, racing for the bell and the tall boy ringing it by the water’s edge.

It was like this every time the bell rang.

At the cove, they lined up, breathless and staring out to sea, to watch the boat come in against the sunset. They stood waiting like uneven fence posts. There was Deen, who towered beside Jinny and now leaned to set the bell gently back on its hook, and little Sam, beside him. There was thin Eevie, frowning at the lapping water as though it had done something wrong, and Oz and Jak, jostling each other. Joon stood tall and straight at one end of the line, her gaze intent on the sea, and Nat waited patiently beside her, a book clutched in her hands. Then there was Ben, just a year below Jinny and almost exactly her height, smiling his easy smile as he stared out at the water patiently.

Deen had been the one to spot the small green boat, appearing through mist that wreathed the island, cutting through the whitecapped waves. Deen had lifted the bell and rung it to summon the others. Deen had been alone, briefly, with the knowledge that it was time again for a Changing.

Jinny didn’t think that was fair to Deen. After all, it was his turn to leave. He shouldn’t have had to ring the bell too and stand there on the beach, waiting alone. Jinny edged closer to him now. She took his cold hand, and Deen gripped her fingers tightly, laced them with his own, but didn’t turn to look down at her. He kept his dark eyes trained on the boat in the distance, so Jinny did the same. She wondered what he was thinking. He seemed strangely calm, unsurprised, almost like he’d been waiting for the boat. But his jaw was clenched firmly.

In a handful of silent minutes, the boat slipped into the cove and nestled its green prow in the sand at their bare feet. Then came the empty before moment. The strange heartbeat of time when the nine kids on the shore peered into the boat. Before anybody said a word. They all stared.

At the shivering child staring back.