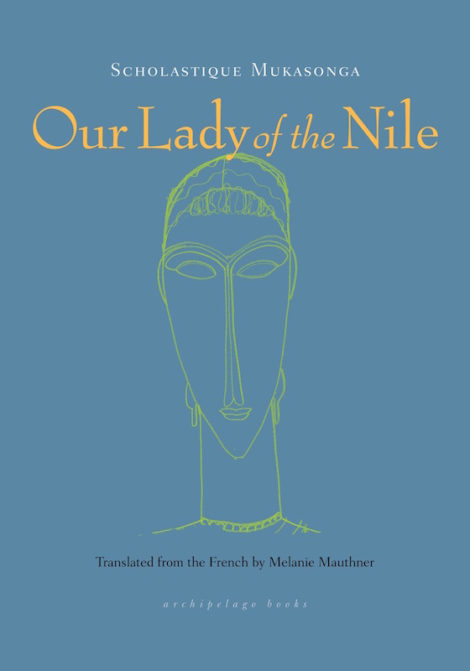 OUR LADY OF THE NILE

In her first novel, Our Lady of the Nile, originally published in 2012 by Gallimard, Scholastique Mukasonga drops us into an elite Catholic boarding school for young women perched on the ridge of the Nile. Parents send their daughters to Our Lady of the Nile to be molded into respectable citizens . . . and to escape the dangers of the outside world. Fifteen years prior to the 1994 Rwandan genocide, we watch as these girls try on their parents’ preconceptions and attitudes, transforming the lycée into a microcosm of the country’s mounting racial tensions and violence.

In her first novel, Our Lady of the Nile, originally published in 2012 by Gallimard, Scholastique Mukasonga drops us into an elite Catholic boarding school for young women perched on the ridge of the Nile. Parents send their daughters to Our Lady of the Nile to be molded into respectable citizens . . . and to escape the dangers of the outside world. Fifteen years prior to the 1994 Rwandan genocide, we watch as these girls try on their parents’ preconceptions and attitudes, transforming the lycée into a microcosm of the country’s mounting racial tensions and violence. In the midst of the interminable rainy season, everything unfolds behind the closed doors of the school: friendship, curiosity, fear, deceit, prejudice, and persecution. With a masterful prose that is at once subtle and penetrating, Mukasonga captures a society hurtling toward horror. 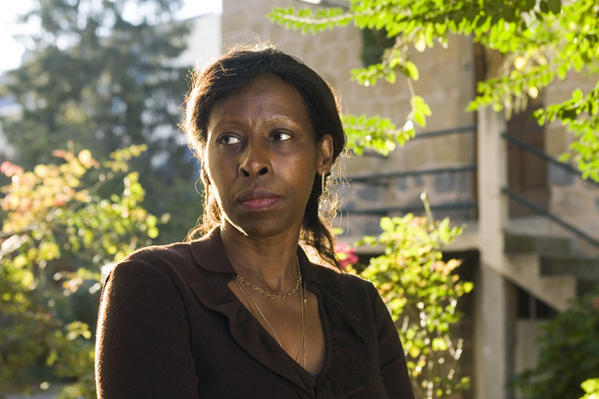 Born in Rwanda in 1956, Scholastique Mukasonga experienced from childhood the violence and humiliation of the ethnic conflicts that shook her country. In 1960, her family was displaced to the polluted and under-developed Bugesera district of Rwanda. Mukasonga was later forced to leave the school of social work in Butare and flee to Burundi. She settled in France in 1992, two years before the brutal genocide of the Tutsi people. In the aftermath, Mukasonga learned that 27 of her family members had been massacred. Twelve years later, Gallimard published her autobiographical account Inyenzi ou les Cafards, followed by La femme aux pieds nus in 2008, L’Iguifou in 2010, and Ce que murmurent les collines in 2014, all widely praised. Her first novel, Notre-Dame du Nil, won the prestigious Renaudot Prize and the Ahamadou Kourouma Prize in 2012, as well as the Océans France Ô Prize in 2013 and the French Voices Grand Prize in 2014.

MELANIE MAUTHNER studied Modern Languages at Wadham College, Oxford, and worked as a sociology lecturer before becoming a translator. Her poems and short fiction have appeared in a variety of literary magazines and anthologies. She performs as part of the London writers’ collective Malika’s Poetry Kitchen.

“Mukasonga is extremely good at showing, as only a novelist can, how the tendencies toward the Rwandan genocide started well before 1994. Sneaky, lingering, her story evokes a sense of menace, and eventually a scene of full-blown violence, that sticks with you.”—Bookforum

“[Our Lady of the Nile] is buoyed by its air of foreboding consequence that imparts urgency to almost every page.”— Christopher Byrd, The Barnes & Noble Review

“Mukasonga is a playful author, and a chuckling good humor pervades the book. Her deliciously limpid, melodious style makes Rwandan daily life vividly accessible. It’s a total immersion in a way of life with its own customs and morality, with a handful of comical and compelling schoolgirls swept up in the divisive hatred of a nation, confused and vulnerable and just being teenagers. Mukasonga expertly draws together all her threads and stories in the climactic sequences to create a skillfully orchestrated vision, both loving and fearful, of her beloved homeland ripped apart by vicious racial hatred.”— Nick DiMartino, Nick’s Picks, Shelf Awareness

1. The lycée of Our Lady of the Nile dominates the book, both as a setting and as a symbol for both the past and future of Rwanda and Africa as a whole.  What things do you notice in the first few pages of the novel that describe the construction of the lycée, its location, its symbolic force?  By the end of the novel, how do we view the lycée?  Is it a force for good, for bad, or something more complex?

2. The unveiling of the statue of Our Lady of the Nile and its christening provides a potent symbol for the overarching goal of the lycée, to create a new African ruling class rooted and educated in the traditional European (white) values, in other words black educated (or “civilized”) Christians.  As we move through the novel, to what extent is that project successful?  Where are moments in the novel where its failure is explicit? And what do we make later in the novel about the fact that the former Virgin Mary had been painted black and so became Tutsi? See “The Virgin’s Nose.”

3. The concept of the white man’s burden (i.e. that white’s have an obligation to ‘civilize’ non-whites through education and religion, but also to preserve and protect elements of the indigenous cultures under the assumption that the indigenous culture wouldn’t be able to do so themselves) is omnipresent in the novel.  What examples do you see?  For example, one stark instance is the episode of the gorillas, presumably referencing the famous primatologist Jane Goodall as well as Monsieur Fontenaille.  Furthermore, how does Mukasonga present these instances, and in what ways does she criticize them?

4. References to witchcraft, witchdoctors, curses, spells, and poisons abound in the novel.  These ‘pagan’ aspects of the native Rwandan culture exist side by side with the Christian presence, and while they would seem to be opposed, rather seem to intermingle into something distinct.  Where do you see this sort of fusion happening? Or what are some instances where the seemingly primitive practices and beliefs of witchcraft come into contact with very modern and contemporary events or figures? As an example, look at the episode describing the theft of the saber of the King of Belgium.

5. How does language function in the novel, especially as it relates to colonialism and issues of power? The lycée is a French only zone where Swahili or other native languages are not permitted.  To push further, remember that Mukasonga wrote the novel in French, the language of the education that eventually allowed her to leave Rwanda and move to France, escaping the devastation of the Rwandan genocide that claimed the lives of hundreds of thousands, including the vast majority of Mukasonga’s family.  What does it matter that she has written the novel in the language that both saved her and yet was the language of the ruling class that did so much harm to her native country?

6. We are told incessantly that the purpose of the lycée is the advancement of the Rwandan women. To what extent are the lives of the women/girls we meet in the novel improved or advanced?  At the very beginning of the novel, we read, “The young ladies of Our Lady of the Nile know just how much they are worth.” (8).  What are they worth?  What are the options for these women?  Simply political bargaining tokens for men wishing to advance their own interests, even if this brings the women personal security and even luxury?  Is this feminism? And if so, of what sort?  Pay particular attention to the case of Frida, described in the section “Up the Virgin’s Sleeve.”

7. At the end of the section “Up the Virgin’s Sleeve” Frida’s death is hushed up, not mentioned, and essentially silenced from the collective memory of the lycée, ranging from the teachers to the students.  Mukasonga writes, “For there was now a shameful secret lying coiled deep within the lycée, and deep within each of the girls, too; remorse in search of a culprit; a sin that could never be purged since it would never be owned” (132).  We can generalize Frida’s death to the millions of deaths that eventually occurred during the genocide, or even deaths that occurred as a result of colonialism more generally.  It’s clear that part of the grieving process, part of what allows Mukasonga to move forward in her life, is this ‘owning’ of the sins, both collective and personal.  The way one owns the sin is to tell it, to write it, to make the secret visible.  What other instances of secrets, forgetting, or erasing do we see in the novel?  And to complicate matters further, what do we make of the witchdoctor’s comment, “The whites wrote the secrets down”? (146).

8. There is much white fantasizing about the black body, both physically and understood in a more general cultural sense, ranging from the mythic to the sexual, even the perverse.  Consider the cases of Father Herménégilde, Monsieur de Fontenaille, and Father Pintard.  What unifies these separate cases, and at one points do they differ? How does the white gaze play into these cases as well? Consider this quote:  “’here, we’re [as Tutsis] inyenzi, cockroaches, snakes, rodents; to whites, we’re the heroes of their legends’” (165).

9. The conflict between the Hutu and the Tutsis permeates the novel, through quotidian interactions all the way up to more explicit discussions and terminating in violence.  Although the horrors of the Rwandan genocide of 1994 was still many years away from the time in which the novel occurs, violence against Tutsis was becoming more and more commonplace during the time of the novel. What foreshadowing do we find?  And what do we make of the explicit alignment of the Tutsis with the Jews (119, 164) by Father Herménégilde and Father Pintard, especially considering the novel takes place in a post-Holocaust world?  The most poignant example is the final two episodes of the novel.

10. What do we make of the final episode of the novel, where the prejudice boils over into nightmarish violence? The occult appears once more as a major force, providing safety to Virginia. Does the novel end on a hopeful note? What do the gorillas come to represent in the final scene?