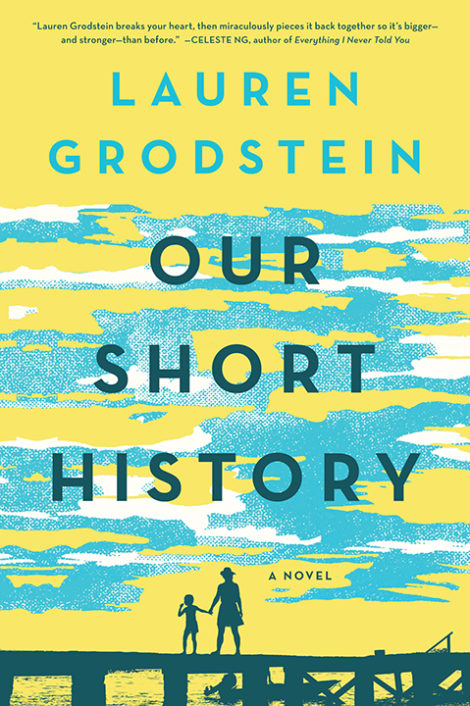 How can a woman learn to let go of the people she loves the most?

Karen Neulander, a successful New York political consultant and single mother, has always been fiercely protective of her son, Jacob, now six. She’s had to be: when Jacob’s father, Dave, found out Karen was pregnant and made it clear that fatherhood wasn’t in his plans, Karen walked out of the relationship, never telling Dave her intention was to raise their child alone.

But now Jake is asking to meet his dad, and with good reason: Karen is dying. When she finally calls her ex,

How can a woman learn to let go of the people she loves the most?

Karen Neulander, a successful New York political consultant and single mother, has always been fiercely protective of her son, Jacob, now six. She’s had to be: when Jacob’s father, Dave, found out Karen was pregnant and made it clear that fatherhood wasn’t in his plans, Karen walked out of the relationship, never telling Dave her intention was to raise their child alone.

But now Jake is asking to meet his dad, and with good reason: Karen is dying. When she finally calls her ex, she’s shocked to find Dave ecstatic about the son he never knew he had. First, he can’t meet Jake fast enough, and then he can’t seem to leave him alone. Karen quickly grows anxious as she watches Dave insinuate himself into Jake’s life just as her own strength and hold on Jake grow more tenuous.

As she struggles to play out her last days in the “right” way for Jake, Karen wrestles with the knowledge that the only thing she cannot bring herself to do for her son—let his father become a permanent part of his life—is the thing he needs from her the most. With heart-wrenching poignancy, unexpected wit, and mordant humor, Lauren Grodstein has created an unforgettable story about parenthood, sacrifice, and life itself.

Lauren Grodstein is the author of the Washington Post Book of the Year The Explanation for Everything and the New York Times bestselling A Friend of the Family, among other works. Her stories, essays, and articles have appeared in various literary magazines and anthologies, and have been translated into several languages. Her work has also appeared in Gourmet, The New York Times, and The Washington Post. She directs the MFA program at Rutgers University, Camden, where she is an associate professor of English.

“In Our Short History, Lauren Grodstein breaks your heart, then miraculously pieces it back together so it’s bigger—and stronger—than before. This novel will leave you appreciating both the messiness of life and the immense depths of love.”—Celeste Ng, author of Everything I Never Told You

“One of the best books of 2017….Grodstein has not just written another beautiful book, but one with deep purpose and meaning.” —Roar

An Essay by Lauren Grodstein

At the intersection of two highways near my house in New Jersey sits an improbably cheap fruit and flower store. The last time I was there, they were running a six-dollar special on hanging planters, so I bought one, filled it with petunias, and hung it from my porch. The petunias draped fetchingly over the sides of the pot and made my house look very charming.

A week later, a nervous chirpy sparrow started dashing from the innards of my planter every time I came close. What’s with the sparrow? I wondered aloud. Who’s it hiding from?

I bet it built a nest in there, said my seven-year-old son, Nathaniel.

Sparrows have nests? I said. I’d always thought of sparrows as kind of homeless birds, congregating by the trash cans outside pizza places. My son looked at me like I was crazy and then requested that I hoist him up to look inside the planter. And sure enough, there it was, a perfect nest, maybe three inches in diameter, made out of twigs and bits of fluff.

In the next few days, more magic: first, two tiny bluish eggs, then a third, and then a fourth, all neatly arranged. How did the sparrow find the time to do all this? Some days it was all I could do to fold the laundry.

And then, that Saturday, a mystery: a slightly larger, more speckled egg nestled among its four fellows.

I don’t think that one belongs there, my son said. I think it belongs to a different bird. Does that ever happen, where a bird ends up in someone else’s nest?

We went inside to have a discussion with Google, who told us that sure enough, this egg was not a sparrow’s egg but rather the egg of a cowbird. Instead of raising its own young, the cowbird drops its egg in another bird’s nest in the hopes that the other bird will be a sport about it and raise the baby cowbird as its own. The technical name for this kind of bird is a “brood parasite,” but that sounded pretty nasty, so Nathaniel and I decided we would call the cowbird something else: the biological mother.

Biological mothers are on our minds a lot these days, as we anxiously await the arrival of my son’s sister, our new daughter, who is currently living in an orphanage in China. As I write this in May 2016, our daughter, Xiaoxiao, is almost two years old. She will be with us this fall—we have been working on bringing her home for fourteen months. We are so close now that we’ve begun to count days.

What do you think the biological mother is doing right now? my son asked, peering into the nest the day after we found the cowbird egg. Maybe working, I said. Maybe going back to school.

I wonder if she thinks about her egg, Nathaniel said. I would, if I were her.

My husband, the only one of us tall enough to see into the nest without using a stepladder, started reporting on the eggs on his way in from work. Eggs looking good, he’d say. Flowers need water. Then we’d eat dinner, and after dinner we’d watch the videos of Xiaoxiao the orphanage sent us.

But then last Thursday, I checked and saw that two sparrow’s eggs were missing from the nest. The next day, one more was gone. My heart thudded. The following morning, the nest was empty. Even the cowbird’s egg had disappeared.

What had we done wrong? Had we checked too vigilantly? Driven the sparrow crazy with all our comings and goings?

My son and husband both seemed a little disappointed about the mysteriously empty nest, but as for me, I was beside myself. I looked all around the porch for eggshells but didn’t find the merest feather. It was as if the eggs had never been there at all. I stood by my back door, looking out at the planter hanging from the porch, feeling like an idiot because I was crying.

Our Short History tells the story of a single mother named Karen who has stage IV ovarian cancer. Karen knows that when the time comes, she will have to leave her young son, Jake, to her sister’s care, and she wants to make sure that things go exactly to plan. She’s diligent about every detail, even freezing an absurd amount of baked ziti so that whenever Jake misses her, there it will be, something she made for him with her own hands.

In the beginning of the novel, Jake asks to meet his father, a man Karen dated briefly who broke up with her after she found out she was pregnant. She agrees to the meeting because she assumes it will be a blip, a moment’s interest. Instead, Jake and his father fall in love at first sight. They share a dorky sense of humor, a fierce love of video games, an obsession with Star Wars. They have the same half-curly hair and hazel eyes.

Karen doesn’t want to let Jake have a relationship with his father, because a) his father broke her heart, and b) she’s been raising Jake herself for six years and suddenly this guy gets to swoop in and be Superdad? No way, Karen thinks. Not happening. She goes a little crazy at the thought of this man getting his undeserving hands on her son.

But Jake loves his father. And she loves Jake more than anything else she can name.

The more I think about Karen, the more I identify with her: It’s easy to become a little crazy when, for instance, you’re waiting for news of the daughter you’ve never met. But more than that, I think I was able to write Our Short History because I know the desperation, the helplessness, of loving your child, and the way that kind of love can derange a person. It’s the kind of love that lifts cars and steals bread and gladly sacrifices itself again and again. I know this because I live it. And that’s why, even though imagination is my job and my hobby, I can’t imagine what it took for Xiaoxiao’s biological mother to let her go.

But for some reason I was able to imagine Karen, desperately missing the little boy who was still standing in front of her. I was able to imagine her cataloging the way he runs, the scrapes on his knee, his favorite T-shirts, his favorite songs. I loved Karen for the way she loved her son, and for what she was willing to do to keep him by her side. I also loved writing about her because it felt like a way of explaining to my own children—the one I know and the one I have yet to meet—how desperately I love them. It seems almost unhinged to say these sorts of things out loud, maybe: I love you more than anyone. I love you more than I love me.

But one day I hope they’ll have nests of their own, and they’ll understand.